← Back to All Facts
Fact #2
CO2 vs Temperature CO2 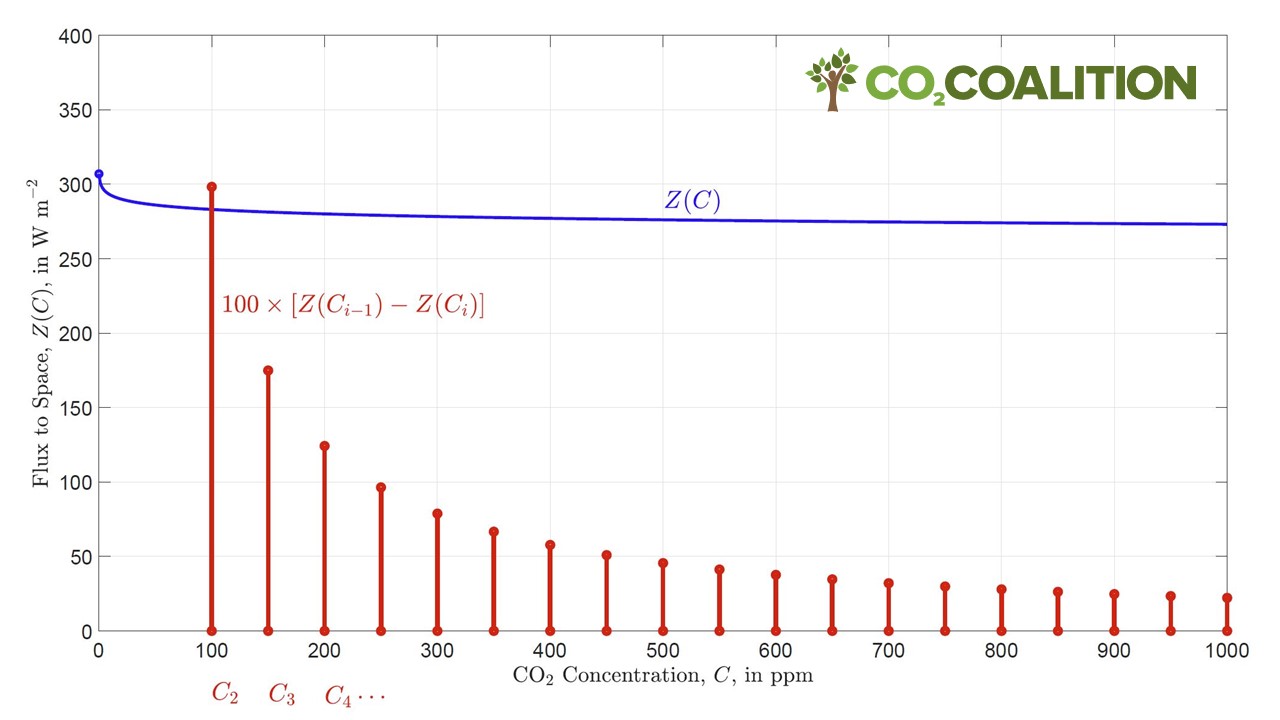 Climate scientists have determined, and both sides agree, that the warming effect of each molecule of CO2 decreases significantly (logarithmically) as its concentration increases. This is one reason why there was no runaway greenhouse warming when the concentration of CO2 was approaching 20 times that of today. This inconvenient fact, important though it is, is kept very well hidden and is rarely mentioned, for it undermines the theory of future catastrophic climate change. Diminishing returns apply.

A more detailed description of the chart for the physics aficionados is provided here by Dr. William Happer:

“The blue curve shows how the thermal radiation flux  Z(C)  from Earth to space changes with the concentration  C of carbon dioxide (CO2) in the atmosphere.  This example is for a temperate, summertime latitude.   C is measured in parts per million (ppm) of all atmospheric molecules.   At the current value of the CO2 concentration,  about  C = 400 ppm, the flux is Z(400 ppm) = 277  Watts per square meter (W/m^2).  If all the CO2 could be removed from Earth’s atmosphere, so C = 0, but there were no changes in the  concentrations  of the remaining greenhouse gases (water vapor, ozone, methane and nitrous oxide) and no changes in the atmospheric temperature profile, the flux would be larger, Z(0 ppm)= 307 Watts  (W/m^2), shown by the blue dot on the vertical axis of the graph. Adding the greenhouse gas CO2 diminishes the flux to space, very rapidly for the first few parts per million of CO2, as one can see from the blue curve. But as more CO2 is added a law of diminishing returns comes into play. The blue curve is almost flat for current concentrations of CO2, so the greenhouse effect is very insensitive to changes in CO2 concentrations. In the jargon of radiative transfer the greenhouse effect is said to be “saturated.”

The vertical red lines show the decrease of flux to space caused by successive increases of the CO2 concentration  C by 50 ppm increments. The increments are so small that they need to be multiplied by a factor of 100 to be clearly visible on the graph.  Except for concentrations C that are almost zero, every doubling of CO2 concentrations decreases the radiation to space by 3 W. For example, the first red bar show that increasing C from 50 ppm to 100 ppm decreases the radiation to space by 300/100 W/m^2 = 3 W/m^2.”