Many of the world’s leaders appear to believe that emissions of carbon dioxide (CO₂) constitute an existential threat whose impact is already severe and will become impossible to deal with within a very few years. This has resulted in a number of international agreements, beginning with the Rio Pact of 1992 and continuing up through the 2016 Paris Accords. Despite these agreements, the increase in the concentration of CO₂ in the atmosphere continues unabated (see Figure 1). In surveying the underlying science, it becomes clear that the role played by China in this story is indicative of a more general cynicism inherent in many of the supposed “solutions” to climate change.

From a minimum in temperature around 1960 (basically the end of a modest cooling trend beginning around 1939, which led to concerns over global cooling) until 1998, the global mean temperature anomaly (the index used to describe the Earth’s temperature) did increase by about 0.5 degrees Celsius. That’s a small change compared to the typical change between breakfast and lunch, though the net increase since then has been relatively insignificant (except for a major El Niño in 2014-16) and appreciably less than predicted by all climate models. It should be noted that the increase was small compared to what was happening in any given region, and temperatures at any given location were almost as likely to be cooling as warming. Despite the fact that increases of CO₂ thus far have been accompanied by the greatest increase in human welfare in history, and despite the fact that there have been large increases in the Earth’s vegetated area largely due to increases in CO₂’s role in photosynthesis, governments seem to have concluded that another 0.5 C will spell doom. 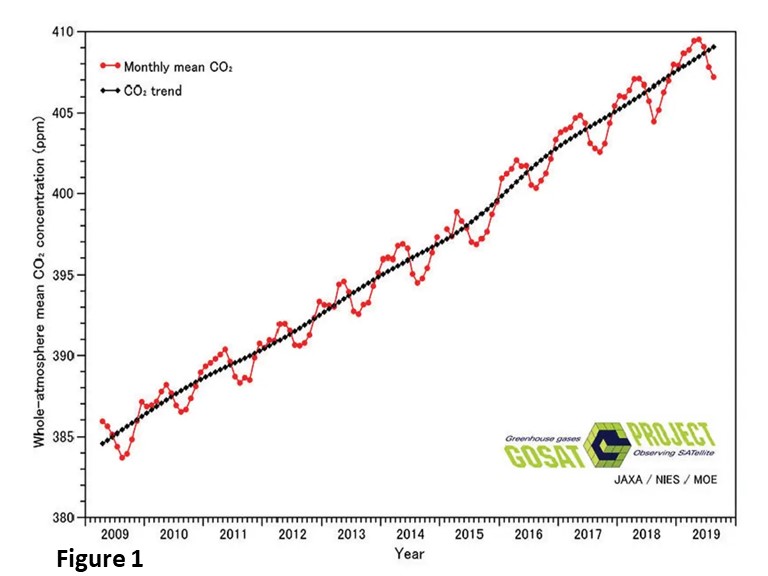 One sees frequent references to the agreement of 97% of the world’s scientists. However, as pointed out by Joseph Bast and Roy Spencer (and myself), this claim is specious. One also sees references to increases in things like sea level, hurricanes, and other weather extremes, but as been widely noted, these claims are based on the illegitimate cherry picking of starting dates for the trends. There is also the important question of what exactly constitutes an existential threat. According to the United Nations Intergovernmental Panel on Climate Change, if we continue along the present path, using the current models that seem to overestimate warming, there would be in 2100 a reduction of global gross domestic product of less than 4% (of a total GDP that would be much higher than what we have today). It is hard to call this an existential threat.

Let us ignore the above problems for the moment, and ask why emissions that presumably have led to the observed increase in CO₂ have continued to increase. Figure 2 below shows the likely answer. Increasing emissions from China, India, and the rest of the developing world swamp the small reductions in the Anglosphere and the European Union. Indeed, if emissions from the Anglosphere and the EU were to cease (which is of course an impossibility), it would make little difference. According to the Global Energy Monitor, China is planning the addition of 200 GW of coal-fired generating capacity by 2025. If we assume this is a four-year period and that a large-scale power plant is 1 GW, that would be about one plant per week over the next four years. Why would China intentionally pursue the presumed destruction of the Earth?Moreover, why are the Anglosphere and the EU pursuing hugely disruptive, destructive, and expensive policies intended to reduce their already largely irrelevant emissions? 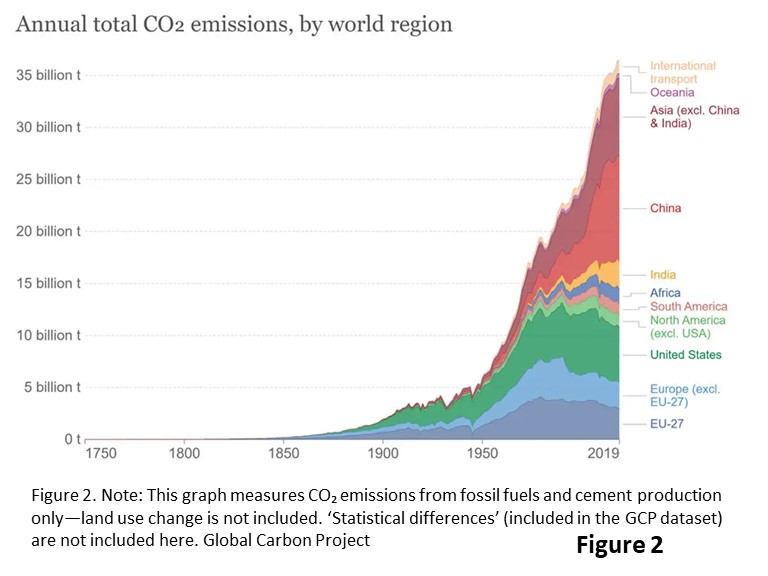 The answer to the first question is likely to be that China sees the threat of climate change as readily manageable regardless of what one believes about the underlying physics (remember that China’s leaders, as opposed to ours, tend to have technical backgrounds). But they also recognize that climate hysteria in the West leads to policies that clearly benefit China. Indeed, China is actually promoting activities like the Sino-American Youth Dialogue on climate change to promote climate alarm among young American activists. In a recent announcement sent to students at MIT, the Youth Dialogue’s Committee stated:

“With rapid growth of the global population and the continuous expansion of the world economy, carbon dioxide emissions in the atmosphere have surged. Extreme disasters induced by global warming keep popping up. The world is undergoing irreversible climate change. It is in everyone’s stake to protect the planet we call home. We must confront the problems brought to mother nature by climate change and seek solutions in cooperation, sharing responsibility as two major countries and collectively building ‘a community with a shared future for mankind.”

The letter went on to offer modest cash rewards to those making the most “compelling” arguments. At the same time, the Chinese, unlike the World Bank, have been happy to fund coal projects in developing countries. (It will be interesting to see how the Communist Party implements Chairman Xi’s recent pledge to cease this practice.)

The second question is more worrisome because of the patent illogic of proposals claiming to address climate change. Confronted with natural disasters, it is obvious that richer societies are more resilient than poorer societies. For example, earthquakes in Haiti can result in thousands of deaths. Similar earthquakes in California result in orders of magnitude fewer deaths. Thus, it would seem that confronted with what is claimed is an existential threat over which we, in fact, have almost no influence, it seems obvious that the correct policy would be to increase resilience against disasters. Instead, the West is proposing to do the very opposite. It is hard to think of good or virtuous reasons for such a policy. Perhaps our policymakers have a pseudo-religious wish to expiate the sin of letting ordinary people reach comfortable middle-class standards of living. The encouragement of such policies by China is undoubtedly one of the reasons; certainly, many of the proposed Western responses (electric cars, windmills, and solar panels) will involve heavy investments in China, which dominates the global solar industry and is already the world’s biggest market for electric vehicles.

But I doubt that this is the main reason. To be sure, the common response of politicians to any purported problem is to do “something.” These “somethings” often involve some short-term benefits to the politicians and institutions that support such policies. But in the case of climate alarm, one has to wonder if those politicians who are investing in waterfront property are really concerned about the climate. Nor is the rejection of nuclear power indicative of seriousness.

Debate over this issue has been avoided and even actively suppressed under the fatuous claim that the science is “settled.” Indeed by 1988 Newsweek had already claimed that all scientists were agreed on the subject, even though nothing could have been further from the truth. And the truth has been buried ever since. As former Energy Undersecretary for Science in the Obama administration Steven Koonin compellingly illustrates in Unsettled: What Climate Science Tells Us, What It Doesn’t, and Why It Matters, the issue remains far from actually being settled. The book relies entirely on the science from the official assessments of the United Nations Intergovernmental Panel on Climate Change, and from similar official U.S. assessment reports. The vicious attacks on Koonin since the book’s release in May indicate the absence of almost any level of discourse. Yet, given what is at issue, the need for an open debate over both our assessment of climate science and the proposed policies is, indeed, desperately needed.

Richard S. Lindzen is Professor Emeritus of Atmospheric Sciences at the Massachusetts Institute of Technology. He is a member of the National Academy of Science, the American Academy of Arts and Sciences, and the Norwegian Academy of Science and Letters, and a fellow of the American Meteorological Society, the American Geophysical Union, and the American Association for the Advancement of Science. He sits on the Board of Directors of the CO2 Coalition, a non-profit based in Arlington, Virginia that promotes the many benefits of increasing carbon dioxide.

This article was first published at tabletmag.com