TUNKHANNOCK, PA —Those declaring the decline of fossil fuels as a done deal should check in with Lackawanna College’s School of Petroleum and Natural Gas (PNG).  Students here are looking forward to life-long careers.

“It baffles me,” says Wyoming County Commissioner Thomas Henry, commenting on the popular media’s gloom-and-doom representation of the fossil fuel industry. Natural gas production has breathed new life into northeastern Pennsylvania, which sits atop the prolific Marcellus Shale formation — one of world’s richest.

“I only see this industry getting larger and larger,” says Mr. Henry. “There is no lack of gas resources here. It is not going away in my lifetime or in my children’s lifetimes.”

Founded in 2010 in modest quarters across the street from a Flying J Truck Stop at New Milford, the school recently moved 30 miles south into an 18,000-square-foot facility in Tunkhannock — a name of Native American origin just as that of the nearby Susquehanna River. PNG is one of six satellite locations of the Scranton-based college, itself founded in 1894 and a former educational resource for young boys who worked in the area’s anthracite coal mines. 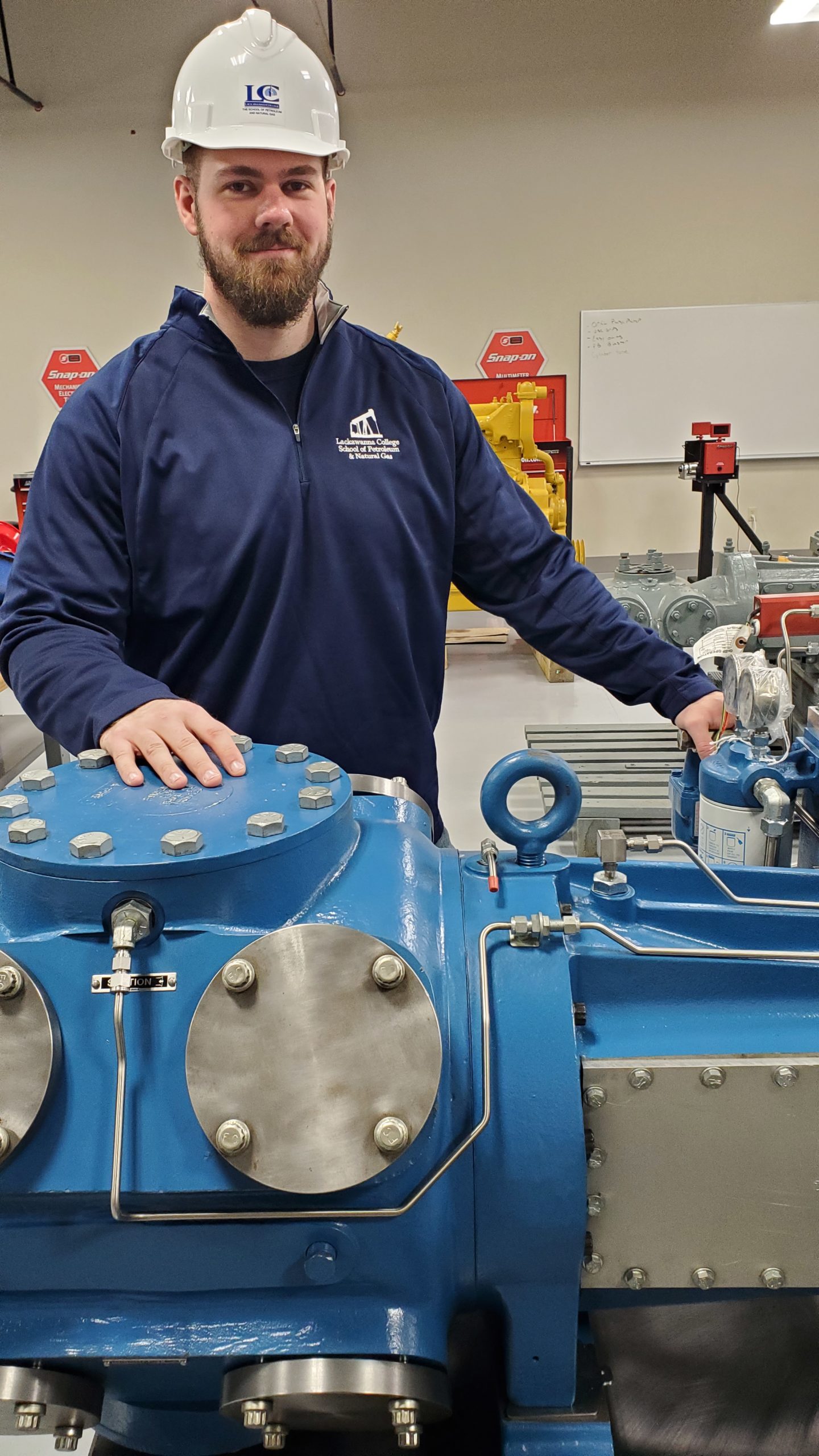 Tom Evans of Wilkes-Barre, standing behind a compressor used for training at Lackawanna College’s School of Petroleum and Natural Gas, will receive an associate degree in May. Photo courtesy of Gordon Tomb.

For an annual tuition of $15,000, students can earn an associate degree in petroleum and natural gas technology as well as a certificate in compressor/engine mechanics — a valued trade since compressors are used to create the pressure differentials that move gas and petroleum through pipelines. Also awarded are a variety of industrial and safety certifications.

The school reports 100 percent placement with graduates typically starting out between $60,000 – $70,000 a year and receiving six figures within about four years of employment — a handsome return on a $30,000 investment in the two-year program.

PNG — having graduated 322 students so far — currently has 55 students, down from the mid-70s two years ago largely because of the pandemic, according to the school. Enrollment hit a peak of 120 in 2012 and dropped at least partly because of a decrease in gas prices and production activity. Whether enrollment increases as prices and productivity rise over time remains to be seen.

In any case, the suggestion of a declining industry “is a big misconception for this region and maybe more generally as well,” says Brian Constanzo, a school administrator. “The ebb and flow of the industry is no indication for the ongoing need for workers.

“People hear that the Keystone pipeline, for instance, is being shut down and think that there are going to be no more pipelines. That just isn’t true. Students coming into this program are going to find a job.”

Sue Gumble, PNG program director, says flatly: “We don’t have enough graduates to fill the jobs that are available. Of the 12-15 companies that we currently partner with, not one of them has enough people for their open positions.”

As an example of the demand for labor, Chad Gorman, operations manager for GasSearch Drilling Services Corp., Montrose, Pa., who oversees 220 people, reports having more than 50 vacancies.

Students are trained for various stages of oil and gas production, including well drilling and pipeline construction and maintenance. Skills taught also are applicable in manufacturing, power generation and other industrial settings. The school’s learning aides include electric motors, petroleum- or gas-fired engines, compressors and drill bits — and plenty of items for which a layman could only guess at their purpose.

A petroleum engineering graduate of a four-year program at Marietta (Ohio) College, 24-year-old Zach Conrad works for Coterra Energy (formerly Cabot Oil & Gas), a major producer of Marcellus gas and one of the companies that provided the school with a $2.5 million endowment several years ago. “Marietta didn’t have half the equipment for hands-on training that Lackawanna has,” he says. “Seeing and doing is half the battle of learning.”

Most students come from the region and stay to work after graduation, although some have travelled as far as Louisiana and Texas for employment. An example of the former is Tom Evans, a resident of nearby Wilkes-Barre, who graduated from Susquehanna University with a sociology degree only to discover an aversion to office work.

with that of a well-drilling roughneck than a social worker’s. “I wanted to do something with my hands and solve problems, something that is exciting, something new every day.”

According to the May/June issue of Oil Man Magazine, the Bureau of Labor Statistics projects employment of petroleum engineers to grow three percent from 2019 to 2029, about as fast as the average for all occupations. A step up the job ladder from PNG graduates, engineers’ mid-career salaries top 20 other professions at $182,000.

While there have been reductions in some petroleum engineering schools around the U.S., Texas A&M International University in Laredo recently approved the creation of a new program. “Oil and gas have been and will continue to be an industry of both great history and promise for years to come,” says Dr. Pablo Arenaz, university president.

Dr. Arenaz’s optimism is consistent with a surge in the use of fossil fuels following global energy shortages resulting from the failures of green-energy sources in Europe and elsewhere and the need for aggressive economic growth in developing nations.

“People miss recognizing what fossil fuels contribute in so many areas like the manufacturing of plastics and other products, in addition to being an energy source,” says GeoSearch’s Mr. Gorman, whose deficit of workers is his constant reminder of the need for the resource.

Gordon Tomb is a senior advisor with the CO2 Coalition, Arlington, Va., and primary editor of “Inconvenient Facts: The science that Al Gore doesn’t want you to know.”

This commentary was first published at Real Clear Energy on December 31, 2021