I was totally shocked to hear the claims by a fire scientist I had once admired and often quoted in my blog posts about wildfire. In a National Public Radio interview Jennifer Balch said, “Climate change has lengthened the state’s fire season.” Then she said “”Climate change is essentially keeping our fuels drier longer. These grasses that were burning, they’ve been baked all fall and all winter.”

Having studied fire ecology for 30 years and knowing her published science, I could only believe she had been corrupted by the need to attract large amounts of funding, and these days that comes to those who blame the climate crisis. And here’s why I now hold that opinion so strongly.

Colorado’s Marshall Fire was a grassfire that happened with temperatures hovering around freezing. All fire experts and fire managers know grasses are 1-hour lag fuels. That means in dry conditions grasses can become flammable within hours. Attempting to link CO2 global warming, she and other alarmists were now blaming the Boulder area’s grass flammability on the warm dry conditions from July through November. But dry conditions in the past months are totally irrelevant. Those months could have also been cold and wet, but just one day of dry conditions is all that is needed for grasses to burn. 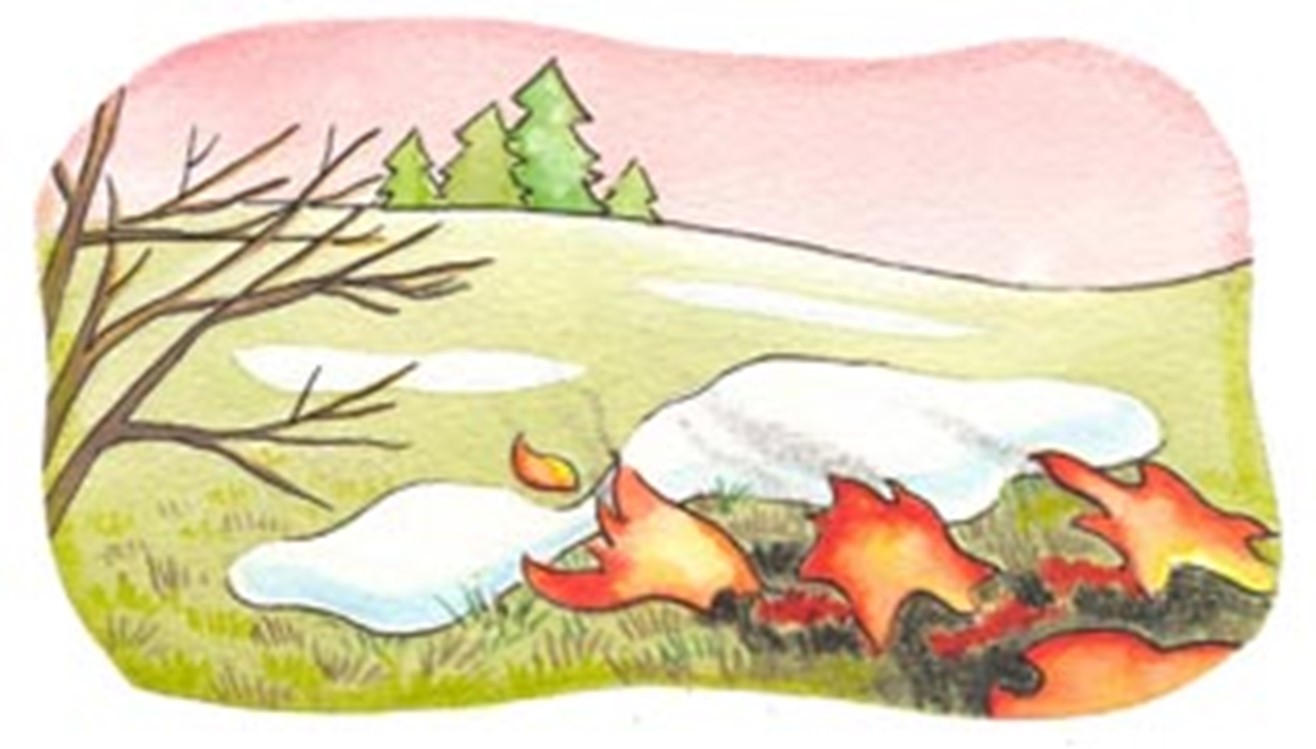 To minimize recklessly set fire that often occur as people burn away unwanted dead vegetation, the Nova Scotia government felt the need to counter the Myth that “It’s safe to burn grass as long as there is still some snow on the ground.”

The Fact is: “Within hours of snow melting, dead grass becomes flammable, especially if there have been drying winds. Grass fires burn hot and fast and spread quickly around, and even over, patches of snow.”  That’s a fact that Balch and every other fire expert should know!

Apparently, Daniel Swain, a climate scientist at the University of California Los Angeles and the Nature Conservancy and acolyte of climate alarmist Michael Mann and Noah Diffenbaugh, also failed to understand grasses are 1-hour fuel. He stated in an interview for NBC’s article How climate change primed Colorado for a rare December wildfire that “Climate change is clearly making the pre-conditions for wildfires worse a cross most fire-prone regions of the world,”

But dry grasses are not the pre-condition to be worried about. The pre-conditions that neither Swain nor Balch shared with the public is well known: Boulder County’s invasive grasses increase fire danger. The “main offender is cheatgrass, which was likely introduced to the area alongside agriculture and ranching” and “is increasing fire danger by 29%”

In fact, in 2013 Balch published, Introduced annual grass increases regional fire activity across the arid western USA (1980–2009), writing “Cheatgrass was disproportionately represented in the largest fires, comprising 24% of the land area of the 50 largest fires” and that “multi-date fires that burned across multiple vegetation types were significantly more likely to have started in cheatgrass.”

It was also very disingenuous for Balch to say ““Climate change has lengthened the state’s fire season”. It is the very same meme that every climate alarmist regurgitates that climate change has made “a year-long fire season the new normal”. But in 2017 Balch published in Human-started wildfires expand the fire niche across the United States that human ignitions “have vastly expanded the spatial and seasonal “fire niche” in the coterminous United States, accounting for 84% of all wildfires”. Balch’s published graph clearly shows that human ignitions have extended fire season all year long. Based on her own research, a more relevant comment would have mentioned that Louisville, Colorado’s population had jumped 10-fold; from 2,000 in 1950 to about 20,000 today. Does a 10-fold increase in population create a 10-fold increase in fire probability. The Marshall Fire was not naturally started by Lightning. 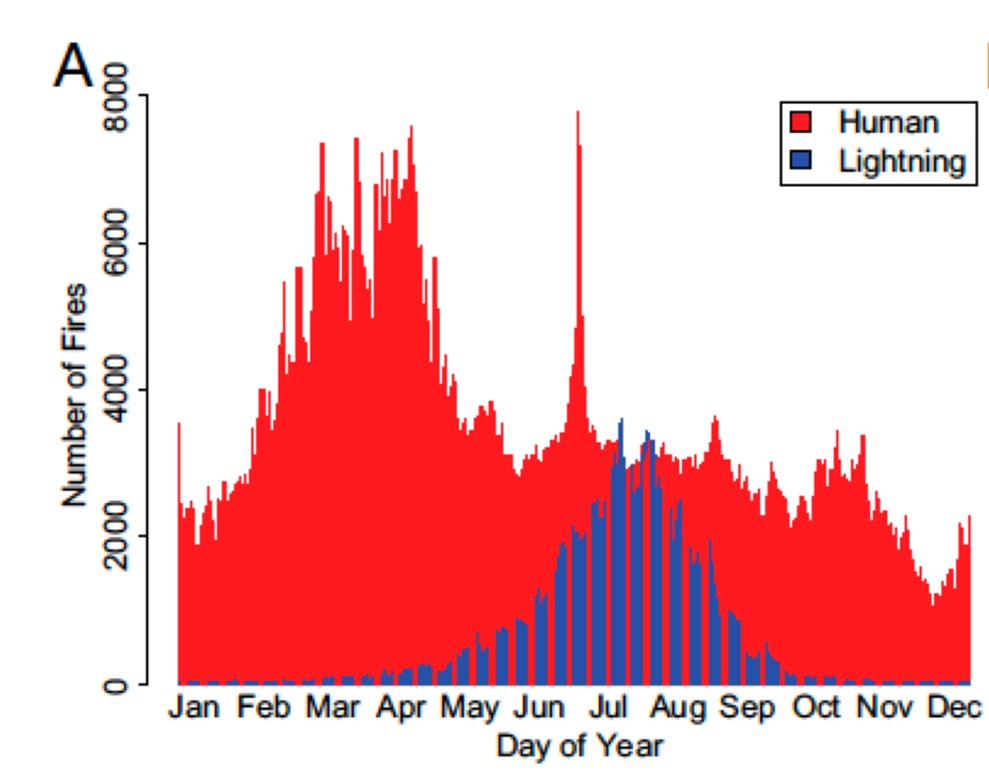 In 2015, Balch created the Earth Lab program at Colorado University. In 2017 it became part of CIRES, a partnership of NOAA and CU Boulder. Earth Lab, got increasing attention from mass media that’s always seeking click-bait. As Earth Lab’s team began blaming more fires on climate change, it got more attention and Balch got more interviews.

Earth Lab hired Natasha Stavros as Earth Lab’s Analytics Hub Director. In videos posted by the Washington Post, she claimed climate change causes “longer, hotter, and drier fire seasons” reflecting Balch’s conversion to a climate crisis narrative. To get around Balch’s earlier scientific research Stavros deflected, “We are not talking about the ignition source” or the “availability of fuels”, “what we are talking about are the conditions of those fuels”. But in the case of the Marshall Fire, 1-hour grass fuels have nothing to do with climate change. It only takes a few hours to be in highly flammable conditions. That’s weather, not climate!

Although lacking in scientific integrity, pivoting to a climate crisis narrative worked in Balch’s favor. The U.S. Geological Survey has selected the University of Colorado Boulder to host the North Central Climate Adaptation Science Center (NCCASC) for the next five years. Balch, as director of CIRES’ Earth Lab, and now NCCASC Director had attracted $4.5 million in funding. Universities around the country similarly create such centers to attract such major funding. Certainly, blaming fires on a climate crisis attracts more funding than if its director sounded like a “denier” blaming invasive grasses and human ignitions.

The politics of funding research requires a major level of group think. Daniel Shechtman won the Nobel Prize for discovering quasi-crystals that are now used in surgical instruments. But when he first announced his observations, he was kicked out of his lab by his colleagues. They saw him as a threat to the lab’s prestige and funding because observing quasi-crystals contradicted the consensus that was enforced by Linus Pauling that quasi-crystal did NOT exist.

Similarly, esteemed atmospheric scientist Dr Cliff Mass was criticized by Washington University administrator’s for detailing how an episode of problematic acidic waters that had been pumped into the state’s oyster’s hatcheries, was due to natural upwelling events, not climate change. But contradicting the climate crisis angle threatened funding to WU’s Ocean Acidification Center. Up until then Mass had been the Seattle Times go-to person for all weather events, but that stopped when his one analysis didn’t support climate crisis groupthink. Dr Peter Ridd was fired for presenting evidence showing his colleague’s claims of coral reef destruction were exaggerated.  So, all savvy university professors know you can’t contradict the meme if you want funding, or worse, keep your job.

Climate crisis groupthink, also ignores natural climate change, as did Balch and Swain. But one meteorologist confidently blamed the lack of snow and dryness on a natural La Nina. The science is well established that depending on how colder Pacific surface waters set up during a La Nina, atmospheric currents can carry higher or lower amounts of moisture to different regions. California had record snowfall this December while Colorado snowfall was very low. And if the Marshall Fire had been ignited just 2 days later, there would have been a snowfall to suppress the fire.

However too often, alarmists scientists cherry-pick one-year events. They weaponized this year’s low snowfall while ignoring that last year’s Colorado snowfall was far above normal. In November last year, Fort Collins received more than 15 inches of snow on its way to 80 inches, which is 25 inches more than normal. Again, such variations in snowfall are weather, not climate. 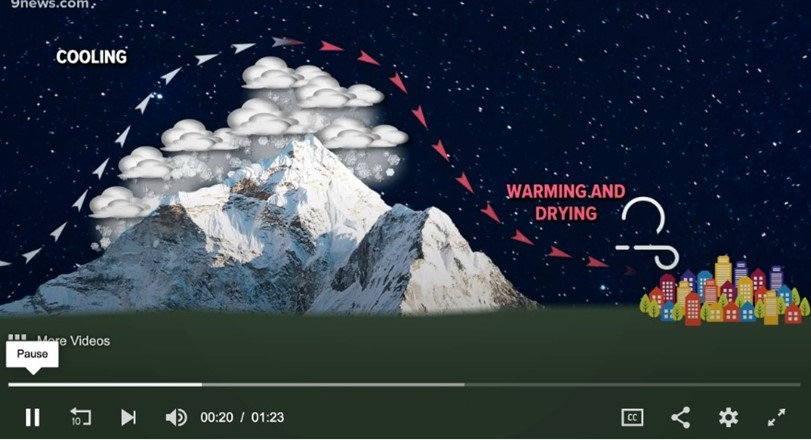 Alarmists also weaponized the dry conditions as solely due to global warming drought. They ignored the drying and warming effects of the Chinook winds that are very common in Colorado. Chinooks are known as “snow eaters” because as the winds pass over the mountains of the western USA they are forced upward and precipitate all their moisture. When those winds descend from the Rockies down to Boulder, temperatures rise adiabatically (due to pressure not added heat) and the warm dry air quickly removes moisture or snow from the surface. Southern California’s Santa Anna winds are similar and drive large fires.

Sometimes Boulder’s winds reach speeds of 100+ mile per hour. NOAA reported The Chinook Wind Events Winter of 1982 during which peak wind gusts more than 100 mph damaged areas around Boulder. Weatherwise journal reported 100+MPH winds over Boulder on January 7, 1969, which snapped power poles and toppled planes as seen in the photographs below. In November 2021 the weather service gave a red flag warming due to the high winds from a Chinook event. But without a coinciding human ignition, there was no rapidly spreading fire. 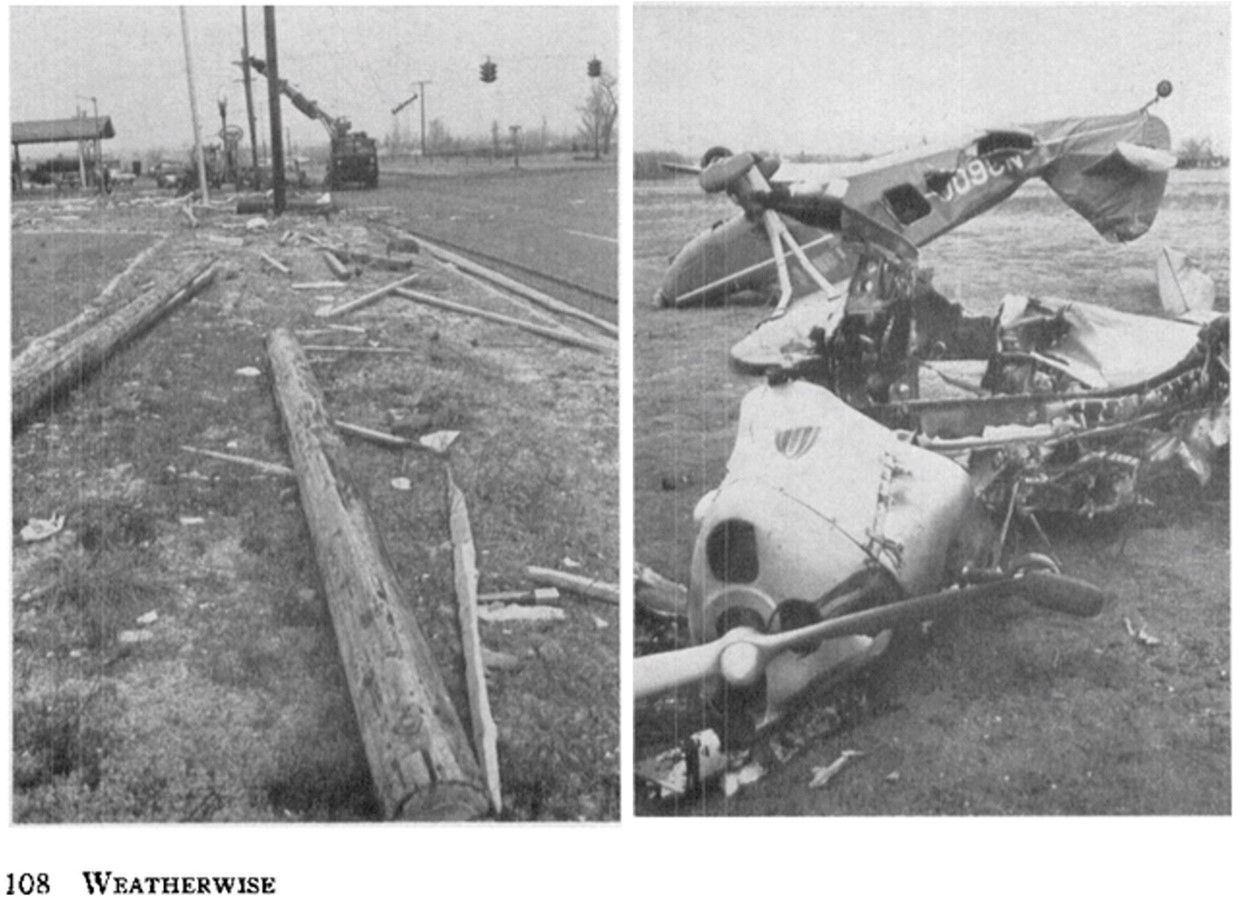 I would like to believe that Balch’s Earth Lab scientists have been campaigning for the housing developments in Boulder’s suburbs of Louisville and Superior to create a system of firebreaks and defensible space. Those suburbs had built into easily ignited grassland in a region where fires are rapidly spread by the dry Chinooks descending from the Rockies. Such natural fire danger is not always obvious to the public looking for affordable housing. But it is not obvious that was ever done, at least not as obvious as faulty climate change narratives.

Fire experts should have pushed for building codes, requiring adequate spacing between new houses. As a story in Wildfire Today reported today, one common feature of the surviving homes was they were more distant from neighboring homes. Many houses in the devastated subdivisions were only 10 to 20 feet apart. Without adequate fire breaks or defensible space, if just one house allowed the fire to reach it, the heat of that burning house is enough to ignite any house next to it. Similar dynamics were seen in California’s Tubbs and Camp Fires that demolished neighborhoods. 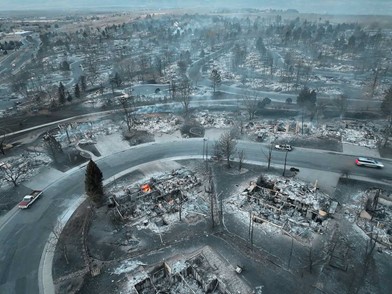 But perhaps local governments were greedy. Eager to build a tax base a growing Louisville population was most important. Politicians had worked hard to present Louisville as one of the top 10 most livable little cities. Putting natural fire danger front and center, might put a damper on the city’s attractiveness. And not surprisingly the Denver Democrats didn’t waste time to capitalize on the Marshall Fire devastation. The released a statement claiming “This fire has also punctuated our climate crisis and made abundantly clear the need for bold action. The science is clear, and the impacts are very real. We will continue to work with our community and legislators to ensure climate change is treated with the urgency and attention it deserves.”

But the science does not show a connection between the Marshall Fire and Climate Change. And due to the greed of the media, politicians, and selfish scientists, only scientific integrity is facing a real crisis. 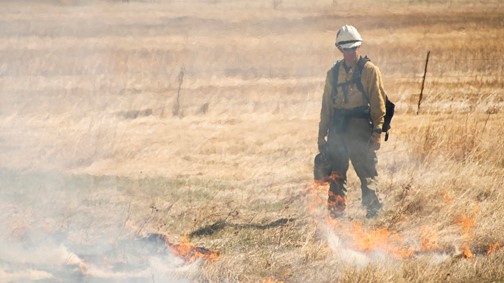 Finally, it is worth noting that some scientists are acutely aware of the increasing fire danger presented by the build-up of dead vegetation. To remove that hazard prescribed burns are being performed. But sometimes prescribed burns get away and burn down people’s homes. So prescribed burns are carefully planned for times when fires are most easily controlled. So, one must wonder just how unusually dangerous local conditions were if the City of Boulder planned a prescribed burn on Monday, December 13, 2021, just 2 weeks before the Marshall Fire. Had climate change really made conditions so dangerous?

This commentary was first published January 2, 2022 at Watts Up With That https://wattsupwiththat.com/2022/01/02/colorados-marshall-fire-has-funding-needs-corrupted-climate-science/