Without climate change polar bears would not exist

A great deal of concern has been expressed during the past 30 years that human-caused climate change will render polar bears extinct. This is based entirely on speculation about the future climate rather than actual reductions in the present bear population. In fact, their numbers have increased during the past 50 years.

How many people are aware of the historical fact that there would not be a single polar bear if not for past changes in the climate? And how many know that Earth has been cooling rather steadily during the past 50 million years to become the Pleistocene Ice Age we are living in today? In fact, it was not until about three million years ago that mountain glaciers and freezing of the Arctic Ocean began to occur regularly in the Northern Hemisphere. Until that time there was nowhere on Earth that the present-day polar bear could have lived.

Uncontested is the fact that as the Arctic froze the polar bear evolved directly from the Eurasian brown bear during a period of hundreds of thousands of years, the precise beginning of which is unknown. The Eurasian brown bear is the same species that we call the North American grizzly bear. But the polar bear evolved long before the brown bear walked across the Bering Land Bridge to the New World 15,000-20,000 years ago during the most recent glacial maximum, when sea level was 120 meters (400 feet) lower than today.

As ice spread across the Arctic in the sunless winter months some Eurasian brown bears ventured out on the ice to eat Arctic seals that breathe through holes in ice on which they birth their young. This eventually resulted in the process of divergent evolution where a single species splits into two due to geographical separation or to different types of ecosystems. In this case, polar bears, found themselves in a cold white environment whereas brown bears lived mainly in forests and grasslands. As a result, the polar bear developed white fur, adapted its digestive system to a more carnivorous diet and became much larger than its now distant cousin. This instance of divergent evolution was caused entirely by change in global climate.

Even after hundreds of thousands of years of separation, the two species are still able to breed during rare encounters to produce viable offspring. This fact gives substance to the timescales required for new species to evolve, even when the climate is changing relatively quickly.

On the basis of a lot of hot air, it is now predicted that polar bears will be extinct by 2100. From the time when the international treaty ending unrestricted hunting of polar bears was signed by all polar nations in 1973, the bear population has grown from 6,000-10,000 to at least 30,000, and perhaps as many as 50,000.

A byproduct of the burgeoning bear population is the ransacking of homes and bear attacks, some of them fatal. The Inuit people who live year-round in the Canadian Territory of Nunavut have recently adopted a Polar Bear Management Plan as a result. This has gone largely unreported below the Arctic Circle, as has the historical treaty signed in 1973.

Patrick Moore is the author of “Fake Invisible Catastrophes and Threats of Doom,” which postulates that all the scare stories today are based on things that are either invisible, very remote, or both.

(The following graphs are for the editors to provide confirmation about the 50-million-year cooling trend, the many glacial and interglacial periods in the Pleistocene Ice Age, and the 6.000-year cooling trend supported by ice cores from Greenland.) 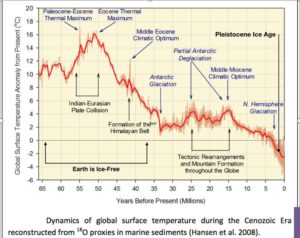 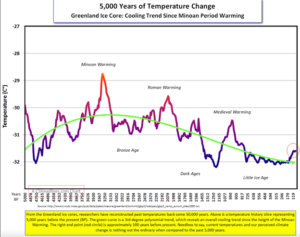 This article was originally published on the bizpacreview website at: https://www.bizpacreview.com/2021/10/28/without-climate-change-polar-bears-would-not-exist-1155382/