Some people just seem to have a distorted view of their proper place in the Universe.  In what should have been seen as a joke has been taken seriously by David Vetter a “Senior Contributor” at FORBES.  Note that the magazine gives a disclaimer that “Opinions expressed by Forbes Contributors [like David Vetter] are their own.”

David Vetter is one of the many so-called journalists associated with Columbia University’s climate news cabal: Covering Climate Now.  They trumpet Vetter’s Forbes piece in their weekly newsletter emailed to thousands of activists journalist as “Media responsibility. Leading climate scientist Professor Michael Mann is urging YouTube to take down climate denial and misinformation videos the way it removes Covid-19 misinformation videos. By David Vetter for Forbes…”.  Covering Climate Now provides the opportunity for other news outlets to reproduce these stories across the world.

YouTube Is Serving Up Climate Misinformation. This Top Scientist Says Google Should Ban It

“Mann wrote the tweet in response to a post from a fellow Twitter user regarding a 2013 video titled “Why Has Global Warming Paused?” featuring William Happer, a professor of physics at Princeton appointed to the National Security Council under the tenure of President Donald Trump, himself an avid climate denier. In the video, Happer, who is not a climate scientist, claims that global warming appeared to have halted in 1998—a claim that subsequent research has disproved and which NOAA has deconstructed in a Q&A.” [ source ]

Now, Michael Mann is certainly a well-known name – but not for any primary advances in his own field. The joke is that Vetter calls Mann a  “leading U.S. climate scientist”.  Mann is a leading voice of Climate Alarmism but, in my opinion,  not really much of a scientist.  The majority of his output is self-promotion and  attacks on other scientists who don’t agree with his brand of radical Climate Alarmism – he attacks anyone who even slightly disagrees with the political statements and solutions promulgated by the IPCC.

Mann complains that a video featuring William Happer, made in 2013,  is available on YouTube.  Vetter (writing on Forbes) says “Happer, who is not a climate scientist, claims that global warming appeared to have halted in 1998—a claim that subsequent research has disproved and which NOAA has deconstructed in a Q&A”.  A clever piece of obfuscation.  The NOAA “deconstruction”  states explicitly “the slowdown in the rate of average global surface warming that took place from 1998–2012 (relative to the preceding 30 years)  has unequivocally ended.”  Happer, in the video, was speaking in 2013 about that very slowdown acknowledged by NOAA in the supposed deconstruction – information, not misinformation – that neither Mann or Vetter apparently ever actually read, or, in my opinion, prefer to ignore.

Who is Mann accusing of misinformation? 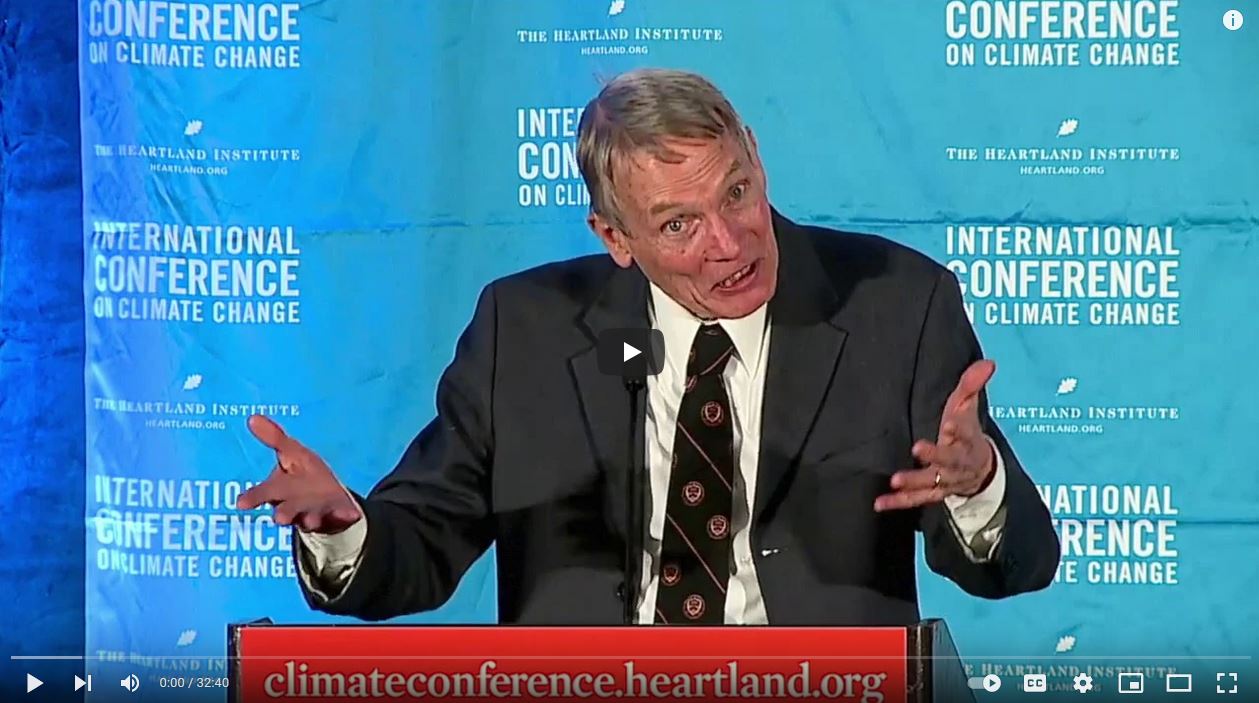 “…the Cyrus Fogg Bracket Professor of Physics and one of the pioneers in the field of optically polarized atoms, is transferring to emeritus status at the end of this academic year. Will is known for developing rigorous theories to analyze his elegant atomic physics experiments as well as for extensive service to Princeton and the U.S. government. His research has initiated several vibrant fields outside of atomic physics.”

“Will is also known for his extensive government service. Since 1976, he has been a member of JASON, a group of scientists and engineers who advise the federal government on matters of defense, intelligence, energy policy, and other technical problems. While partic­ipating in the 1982 JASON summer study, he proposed to use a thin sodium layer in the upper atmosphere as a source of an artificial guide star to correct the “seeing” distortions in optical telescopes due to the effects of atmospheric turbulence. The sodium layer is excited from the ground with a laser and adaptive optics are used with real-time feed­back to cancel the distortions. Today, most large optical telescopes use such laser guide-star systems. From 1987 to 1990, Will served as chair of the steering committee of JASON.

From 1991 to 1993, Will served in President George H. W. Bush’s administration as the director of energy research in the Department of Energy, where he oversaw a basic research budget of roughly $3 billion. His responsibilities included directing much of the federal funding for high energy and nuclear physics, materials science, magnetic confinement fusion, environmental science, the human genome project, and other areas. More recently, he chaired the National Academy of Sciences’ Panel on Nuclear and Radiological Issues and the National Research Council’s standing committee on improvised explosive devices.”  [ source  .pdf ]

William Happer has been a leading star in the world of practical physics and, when not working for the United States government in various  advisory positions,  such as the director of energy research in the Department of Energy from 1991-1993, has been a professor of physics, now Emeritus, at Princeton.

“The Princeton Department of Physics is often ranked high in national and international rankings. According to US News, Princeton is ranked as No. 3 in Physics.[9] In the World University Rankings 2019, Princeton was ranked as No. 1 in physical sciences.”  [ source ]

Will Happer probably knows more about the physics of the atmosphere and energy transfer through it than any other man alive.  Will Happer joined the U.S. federal government‘s super-elite JASON scientific advisory group in 1976, when Michael E. Mann was 12 years old and just starting junior high school.

Summary:  Michael Mann vs. Will Happer?   – field mouse squeaks at the alpha-male lion of physics.

Kip Hansen is a research journalist and a proud member of the CO2 Coalition.

This commentary was first posted on Watts Up With That on December 12, 2021