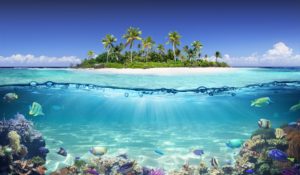 The CO2 Coalition of climate scientists today released a White Paper analyzing decades of peer-reviewed research on the impact on the oceans of carbon dioxide emissions from the conversion of fossil fuels to energy.  Ocean Health – Is there an “Acidification”  problem? concludes that CO2 is an important plankton food that enriches sea life, and that the term “ocean acidification” is highly misleading.

The principal researcher for the paper is biologist Jim Steele.  A member of the CO2 Coalition, Steele is the recently retired director of San Francisco State University’s Sierra Nevada field campus, a position he held for over 25 years.

The acidity or alkalinity of sea water is described by its pH level.  At a representative ocean surface temperature of 25 degrees Celsius, water is acidic at a pH less than 7 and alkaline if pH is greater than 7.  Seawater is naturally alkaline at 8.2.  Steele reports a scientific consensus that even if atmospheric CO2 concentrations were to rise from today’s four percent of one percent to 10 percent of one percent (over about 250 years at current rates), ocean pH would fall only to 7.8, still well above neutral for all ocean surface waters, and stabilize there.

Steele cautioned that “much of the policy debate on pH levels is based on mathematical modeling rather than field data, so a better understanding of the biological dynamics through on-site research is key.”

The White Paper reveals that the term “ocean acidification” was invented to scare citizens into opposing the use of fossil fuels, which power 80 percent of the U.S. and world economies.  It also shows that carbon dioxide is a vital part of ocean health and the ocean food web, because additional CO2 input allows marine life to thrive.  The foundation of the ocean food web is phytoplankton, which includes organisms such as microscopic plants and bacteria. These organisms require CO2 to make their food through photosynthesis.

CO2 Coalition chair Patrick Moore, a noted ecologist and a former top-ranking Greenpeace official, said that, “This paper details the powerful cycle that takes surface carbon down to the depths for lengthy periods, before upwelling to enrich surface life again. Shells and marine species thrive in widely varying pH levels, making the so-called acidification crisis yet another cynical example of propaganda masquerading as science. As with fears of polar bear extinction, frequencies of hurricanes, length of droughts, and ‘accelerating’ sea-level rise, the specter of ‘ocean acidification’ has no basis in the scientific data.”

Read Now
The Governor and other officials have relied heavily on the state’s Climate Action Plans and specifically on the 2018 Pennsylvania Climate Action Plan3 in order to support their claims of current and future devastating impacts of continued CO2-driven warming. Assertions in the Climate Action Plan are refuted by the analysis of Gregory Wrightstone, Executive Director of the CO2 Coalition and an expert reviewer for the U.N. Intergovernmental Panel on Climate Change’s 6th Assessment Report (IPCC – AR6). Continue Reading
Next Publication
Climate Issues in Depth
7.9.2022

Read Now
The paper’s Abstract explains that while the “radiative forcing” of each methane molecule is indeed 30 times larger than that of a carbon dioxide molecule, the increase in global methane is 300 times less than that of carbon dioxide. As a result, methane is only one tenth (30/300) as powerful in forcing as carbon dioxide, which adds about a degree Celsius to global warming as it doubles in the atmosphere. A methane doubling would provide only a tiny fraction of total greenhouse forcing, the paper says. Continue Reading