Carbon Dioxide Benefits the World: See for Yourself 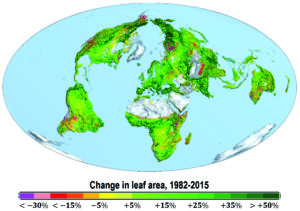 This white paper summarizes the views of the CO2 Coalition, a non-profit organization that seeks to engage thought leaders, policy makers, and the public in an informed, dispassionate discussion of how our planet will be affected by CO2 released from the combustion of fossil fuel. Available scientific facts have persuaded Coalition members that additional CO2 will be a net benefit. Rather than immediately setting this document aside for promoting such a politically incorrect view, readers would do well to act on the ancient motto of Britain’s prestigious Royal Society— nullius in verba, “don’t take anyone’s word for it,” or more simply, “see for yourself.”

Claims that “97 percent of scientists” agree that a climate catastrophe is looming because of the emission of CO2 should be greeted with skepticism. Traditional science has advanced by comparing observations or experiments with theoretical predictions. If there is agreement with theory, confidence in the theory is increased. If there is disagreement, the theory is abandoned or it is modified and tested again against observations. Scientific truth has never been established by consensus, for example, by “97 percent agreement.” History reveals many instances when the scientific consensus of the day was later discredited. The widespread embrace and practice of eugenics in the early 1900s; opposition to the theory of plate tectonics in geology; and the dominance of Lysenkoist biology in the Soviet bloc, are a few recent examples. Given the frequency of mistaken consensus, citizens everywhere should heed the Royal Society’s motto and learn as much as they can about how increasing CO2 levels in the atmosphere will affect the planet.