CO2 Coalition member Andy May posted a science-based commentary on March 3rd rebutting the notion that most of the warming of the last 100-plus years was attributable to man’s emissions. The critique of his post by Climate Feedback was poorly sourced, poorly written and bordered on inane. Andy’s rebuttal is below and I have to admire his restraint in responding in a dispassionate and scholarly manner in his response to what Andy calls “high school level fallacies.”

The Climate Feedback website critiques my CO2Coalition article “Attributing global warming to humans.” The factcheck is here. Like most “fact checks” these days it is a thinly disguised opinion piece. The statement that they claim is incorrect is:

“There is no evidence, other than models, that human CO2 emissions drive climate change and abundant evidence that the Sun, coupled with natural climate cycles, drives most, if not all, of recent climate changes, as described in Connolly, et al., 2021.” [emphasis added]

They cleverly leave out the last phrase: “as described in Connolly, et al., 2021,” and then immediately assert “Solar irradiance has had a negligible impact on Earth’s climate since the industrial era.” This is followed by no evidence other than an appeal to the mythical “consensus.”

Later in the article, they say Connolly, et al. uses simple linear regression to establish a link between solar irradiance and surface temperature. Connolly, et al. does not state that the Sun controls the climate or that humans do, it simply shows that, using available evidence, solar variability (actually TSI, or Total Solar Irradiance variability) could account for anywhere from 0 to 100% of the warming since the Little Ice Age (the so-called “pre-industrial” era). One of the main points of Connolly, et al. is that the IPCC and the so-called “consensus” are ignoring two critical areas of current research. First, they ignore the uncertainty in our estimate of surface warming since the Little Ice Age, and second, they ignore the considerable uncertainty in solar variability long term trends, both recently and since the Little Ice Age. As they state in the paper, the amount of 20th century warming that can be simulated as due to solar variability, depends upon the surface temperature dataset and the solar TSI model used. There are many versions of both. Suffice it to say, while the exact influence of human activities and solar variability on climate change are both unknown, no one can claim solar influence is negligible. The correct answer is we don’t know.

In the Climate Feedback fact check, their Figure 1 shows the TSI reconstruction preferred by the IPCC, the empirical PMOD reconstruction. The PMOD reconstruction was created by Judith Lean and the late Claus Fröhlich by adjusting the data to match their solar model, it was not from the best satellite data, like the more accurate ACRIM model, which shows a long term change in solar irradiance that may explain some of the 20th century surface warming.

Next Climate Feedback claims that there is evidence from independent observations that humans are driving climate change. But, the first piece of evidence they offer is the old and very controversial “atmospheric fingerprint” idea, which I discuss here and here. I understand the logic behind the atmospheric fingerprint idea, but logical speculation does not prove anything. Further, even if the atmospheric fingerprint is caused by additional greenhouse gases in the troposphere it does not imply humans dominate climate change, the concept is qualitative, not quantitative. Further, there are many other reasons why the stratosphere might be cooling as the troposphere warms, and in any case stratospheric cooling has slowed a lot in recent years, how did that happen if greenhouse gases are causing the cooling? See Figure 1. 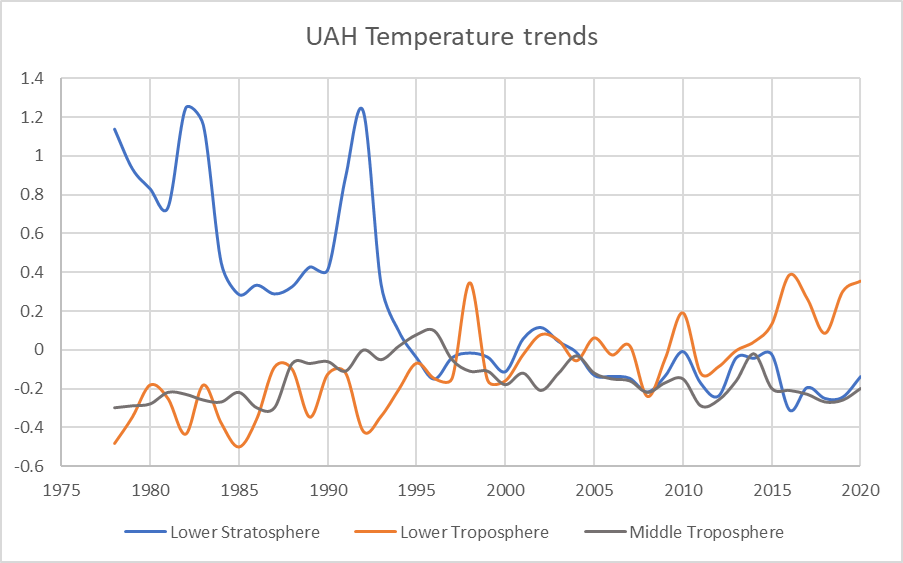 Their next line of evidence is that incoming and outgoing radiation measurements from satellites somehow suggest that greenhouse gas emissions are the cause of global warming. This evidence has two problems, a positive change in the [incoming – outgoing] radiation balance only suggests the surface is warming, it does not suggest that greenhouse gases are the cause. The upper portion of the world ocean has warmed about one degree since the 19th century, consistent with a small positive energy imbalance of about 2-3 W/m2. However, whether this warming is due to greenhouse gases or natural causes is unknown. Further, the best estimate of the continuous incoming and outgoing imbalance is only about 0.5 W/m2 and this imbalance is well below the accuracy of the satellite measurements, which is between ±3 to 6 W/m2 (Loeb, et al., 2018).

The next point they make is that I do not understand what TCR is and that I erroneously believe that the CMIP models (aka the IPCC models) overestimate warming. The “fact check” claims the models “reliably reproduce observational trends in surface” temperatures around the world. The “fact checker” is at odds with his own source, the following is a quote from the latest IPCC report, AR6, on pages 3-23 to 3-24:

“The AR5 assessed with low confidence that most, though not all, CMIP3 (Meehl et al., 2007) and CMIP5 (Taylor et al., 2012) models overestimated the observed warming trend in the tropical troposphere during the satellite period 1979-2012, and that a third to a half of this difference was due to an overestimate of the SST trend during this period (Flato et al., 2013). Since the AR5, additional studies based on CMIP5 and CMIP6 models show that this warming bias in tropospheric temperatures remains.”

Thus, the overestimate applies to the atmosphere and to the ocean surface. Later on page 3-24 we find this:

“In summary, studies continue to find that CMIP5 and CMIP6 model simulations warm more than observations in the tropical mid- and upper-troposphere over the 1979-2014 period”

“… we assess with medium confidence that CMIP5 and CMIP6 models continue to overestimate observed warming in the upper tropical troposphere over the 1979-2014 period by at least 0.1°C per decade, in part because of an overestimate of the tropical SST trend pattern over this period …”

“It has long been known that previous generations of climate models exhibit excessive warming rates in the tropical troposphere. With the release of the CMIP6 (Coupled Model Intercomparison Project Version 6) climate model archive we can now update the comparison. We examined historical (hindcast) runs from 38 CMIP6 models in which the models were run using historically observed forcings. We focus on the 1979–2014 interval, the maximum for which all models and observational data are available and for which the models were run with historical forcings. What was previously a tropical bias is now global. All model runs warmed faster than observations in the lower troposphere and mid-troposphere, in the tropics, and globally.”

Climate Feedback claims they have examined the climate models and determined they were “skillful in predicting” global surface temperatures. This assertion is not consistent with AR6 or with McKitrick and Christy’s study. Their claim that I do not understand what TCR is, is revealing. Gillett is very clear in his article (Gillett et al., 2013) that if human greenhouse gas emissions are driving climate change, TCR should be proportional to emissions. This is logical, but it is not what is observed in some of the models, they point to GISS-E2-H as an example. Clearly, Climate Feedback is trying to obscure the clear connection between model tuning and the hypothesis that CO2 drives climate change, what Steve Koonin calls “cooking the books” (Koonin, 2021, p. 93). In any case, when multiple models arrive at nearly the same temperature record but generate wildly different TCR (climate sensitivity to CO2) values, it is not consistent with CO2 being the climate driver.

They quote Henri Drake at the end of their article, and he writes: “there is ‘abundant evidence’ of greenhouse gas-induced climate changes.” Then he refers to the incoming and outgoing spectrally resolved radiation measurements that clearly show the effects of greenhouse gas absorption and re-emission. Sure, this is true, but how is this “abundant evidence” that humans are causing climate change? Their “fact check” simply reinforces the main conclusion of Connolly, et al.’s exhaustive look at the evidence; that the calculation of the amount of warming caused by humans or nature, is totally dependent upon the datasets chosen for the calculation. It could be 100% human or 100% nature, we just don’t know, carefully selected observations can easily support either conclusion.

Drake’s argument is a type of strawman logical fallacy that one often sees in “fact check” opinion pieces. He takes my point that “There is no evidence, other than models, that human CO2 emissions drive climate change” and subtly changes it to greenhouse gases do not affect our climate, a clearly false statement. Of course, greenhouse gases affect our climate, but this is a far cry from “human CO2 emissions drive climate change.” Similar “fact check” arguments can be seen here. Do not be fooled by these high school level fallacies.