Is it not in the tradition of “liberalism” to support free speech and a healthy exchange of ideas and facts? Your firing of MLA John Rustad for re-Tweeting a Tweet of mine will go down as a huge error in judgement. There is no actual proof or even evidence that there is a “climate emergency”. But it is absolutely certain than CO2 is the basis for all life, as all life is carbon-based, and all the carbon in life comes from CO2. And there is absolutely no hard evidence that CO2 is now, or has ever been, a primary driver of global temperature, never mind the entire climate which includes a lot more than temperature.

Charlie Smith in the Georgia Strait refers to “Moore’s claim that there has been no net warming in Australia in 10 years and that the Great Barrier Reef has more coral cover this year than ever recorded.”

As if I conjured this up myself. In fact, both these reports were from credible primary sources and I cited them in the Tweet. The source for the fact that Australia has not warmed during the past 10 years comes from the highly respected UAH satellite record. See below:

And the coral reef report is from the Australian Institute of Marine Science, the peak government-sponsored body monitoring the Great Barrier Reef for the past 36 years. See below: 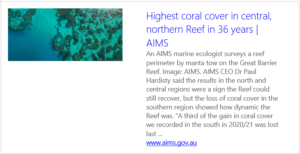 Congratulations on your personal entry into the petty cancel-culture. All John did was repeat the truth. And you punished him for it with your self-righteous zeal that is based on fabrication and clever language about “climate deniers”. We don’t deny there is a climate. We don’t deny that the climate changes. We don’t deny that CO2 is a greenhouse gas and that we are returning some of it to the atmosphere where it came from in the first place. (BTW, all the “fossil fuels” were produced by solar energy through photosynthesis in the sea and on the land. They are by far the largest storage battery of solar energy on the planet). But we do deny that our CO2 emissions are causing a “catastrophe”, but rather that they are causing the greening of the Earth as we humans contribute to a restoration of the global carbon cycle which had been running down for more than 500 million years. The Earth is still in the Pleistocene Ice Age, albeit thankfully now in one of many Interglacial Periods within this Ice Age. But even today the Earth is cooler than it has been for the majority of its existence, and life has flourished through the warmer periods when there was no ice on the poles. Please look it up. It’s there for all to see. And please apologize to John Rustad and re-instate him if he will have you.

My brief bio is attached for your interest.

Patrick Moore, author of Fake Invisible Catastrophes and Threats of Doom, was a director and leader of Greenpeace from its founding in 1971 until 1986. He is currently on the board of the CO2 Coalition.