Nearly every area of the mid-latitudes will see summer heat during the high sun angle summer months. Some years the extremes are greater and more persistent than other years. Ocean temperature patterns, solar drivers and local factors including soil moisture, and foehn wind events play a key role in extreme temperatures in summer.

This year, the summer started out on the cool side in many areas including the tropics which averaged -0.65F colder than the 30-year average as measured by satellites. Some warmth was starting to show in the south-central U.S and western Europe at this time. 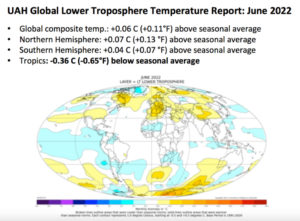 We are in the third year of ‘La Niña’. It is the strongest year of the event. Strong La Niñas have historically been hot and dry in the central states into the eastern United States. They produce more tornadoes in the spring and when the Atlantic is warm and also more landfalling hurricanes in the east. 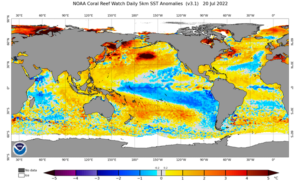 Indeed, the heat is augmented where the springs and early summers are drier than normal. The July to September mean temperature anomalies for La Niñas are shown here (CPC). 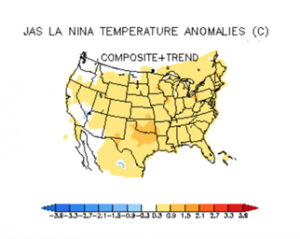 The Southern plains often see the most persistent heat in La Niñas. So far, there have been 26 100F days in Dallas, TX in 2022. No end is in sight until heavy rains develop and put out the fire. Some showers and storms recently lowered maximums a bit.

See how after a cold spell in May, it has been increasingly hot in Dallas. 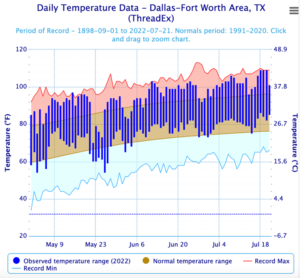 Models have more showers the next two weeks. But without an organized event (like a tropical event), it is difficult to get enough rains to suppress highs in mid-summer for longer periods. Dallas has seen 34 days of 100F heat so far in 2022, but do not be alarmed, Dallas since 1950 has had as many as 71 days over 100F in one year.

All are La Nina years. 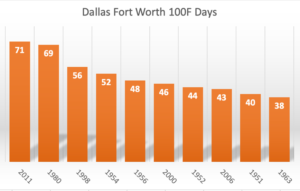 We can see below that the hot summers were indeed strong in multi-year La Niñas (negative MEI v2 (Multivariate ENSO Index) usually found in periods of a negative PDO (Pacific Decadal Oscillation). 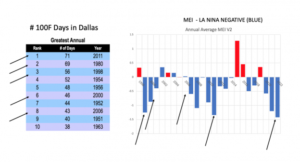 You can see that the Multivariate ENSO Index (MEI) and the negative PDO are both the strongest since 1979 (right side of the above graph). This was a strong event.

As the Dallas data showed, heat is not a new phenomenon nor getting more frequent. In fact, the warmest decade for Texas and the entire U.S. by far was the 1930s. 22 state/territory all-time heat records still reside in the record books that were set in the 1930s. There have been more record lows since the 1940s than record highs. 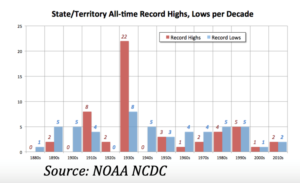 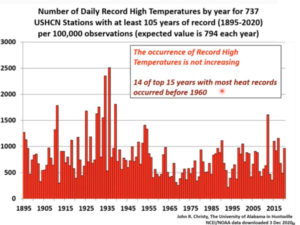 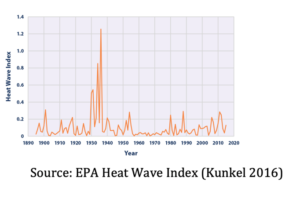 The mid 1930s were especially hot (and record cold in winter). Dryness accentuates both heat and cold.

The Washington Post this week talked about the amazing heat of the summer of 1936 (following the coldest winter). 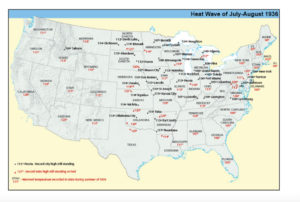 The summer of 1936 produced triple digit heat in 45 of the 48 C states in the continental U. S., most records that are still standing. Eight states saw highs over 120F!

The central heat in La Niñas often plumes north and east in mid-summer into the eastern U.S. and southeast Canada. 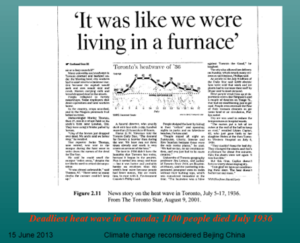 In NYC, 7 of the top 10 warmest Julys  occurred in La Niña summers. The other 3 were in years where ENSO was neutral and/or transitioning to La Nina. As of July 21, 2022 Central Park has averaged 78.6F. 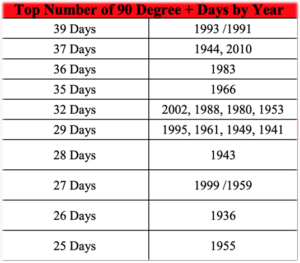 In Central Park, the 1950s was the hottest decade by far. 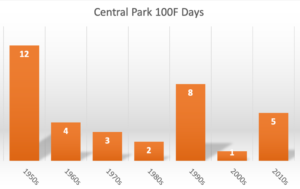 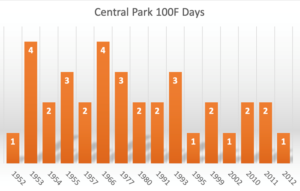 The current heat wave in the Big Apple, in what had been a mostly moderate summer in the first half, will continue to Monday before the typical summer weather returns. 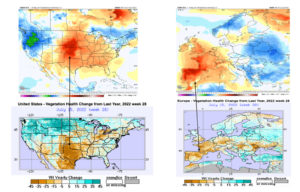 Soil moisture is a key factor in summer. When the soil is dry, the sun’s energy warms the ground and is not consumed in evaporating moisture back into the air. It amplifies any heat building in an amplified pattern.

La Niña induced dryness effect on vegetation in the southern plains is evident. Europe, like the central US, has found itself in a part of the global wave pattern that has limited rainfall and enhanced the summer temperatures. Notice the cold alternates with the warm, a sign of an amplified trough ridge pattern.

The UK is surrounded by water and often that limits the heat. However, the winds turned from off the warm continent into Britain for a few days last week and the temperatures spiked for two days until the maritime influence returned.

Even with the high heat, nights are bringing some relief. More seasonable air has returned. In the UK, cold is a greater danger than heat especially as blackouts threaten in the winter when solar energy is limited given the latitude and cold often comes with little winds at night. Over 20% of the population are in energy poverty, often having to chose between heating and eating. Britain and most countries find 10 to 20 times more people die from cold than heat. 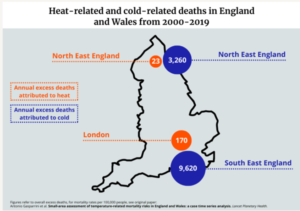 DOWNSLOPE WINDS IN THE WEST

In the western U. S. west of the mountain ranges of the Cascades and the Sierra Nevadas,  the area normally has a natural air conditioner working with the cool waters of the eastern Pacific. Only when there is a pressure pattern strong enough to force downslope winds does the heat develop to the coast. The air is warmed by compression of the air as it descends from low pressure into higher pressure near the surface. These episodes are usually brief.

In late June 2021, a three-day heat wave besieged the near coastal areas of the dry Pacific Northwest as a heat ridge set up in British Colombia on position to cause intermountain heat to sink down to the lower elevations with the accompanying compression producing all-time record heat. See the brief heat burst in Seattle in late June. 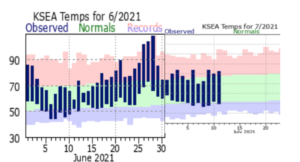 These local heat events are not uncommon and often are found in urban areas near mountains and especially in dry years.

This event led to new record highs in the coastal cities as downslope winds kept the ocean cooling at bay. Triple digit heat is common in summer in the intermountain areas away from the ocean influence. But occasionally some of that heat makes its way to the coast and is superheated by compression as it sinks downslope.

This event is similar to a Sundowner, dubbed a “poison wind.” One such event was reported June 17, 1859, by the Coastal Pilot of California. According to the report, the morning air temperature of 75 to 80 degrees rose steadily until about 1 p.m., when a series of superheated waves of wind blasted the Santa Barbara area.

By 2 p.m., the air temperature reached 133 degrees and hovered there for three hours, killing small animals, destroying fruit, ruining gardens and heavily damaging trees the newspaper reported. That year a similar powerful heat ridge likely forced the wind to sink off the mountains to the north and superheat just as we saw this June.

These events are usually brief and these local weather oddities are not signs of man-made changes.

The metropolitan areas of the Mid-Atlantic and Northeast U.S., experience this compressional warming from downslope winds when heat ridges build east from the central in summer, which also block any sea breezes. , Most of the triple digit readings and high records here occur with west to northwest winds.

Sleep well, it is late July and it is hot. There is nothing unusual nor unprecedented about that.

Joe and John Coleman launched the Weather Channel in 1982 where he was responsible for hiring and directing the 64 meteorologists and broadcasters and designing the award winning programming..