As hosts of the Glasgow COP26 climate conference, U.K. leaders were models for the meeting’s steady stream of misinformation and fearmongering that came from the likes of Barack Obama and Greta Thunberg.

“The clock on the doomsday device is still ticking, but we’ve got a bomb disposal team on site,” said British Prime Minister Boris Johnson. “They’re starting to snip the wires – I hope some of the right ones.” If the specter of catastrophic global warming is not sufficiently scary, how about the image of an explosion?

As for misinformation, Boris claimed that “India (is) keeping a billion tons of carbon out of the atmosphere by switching half its power grid to renewable sources.”

Actually, India is increasing emissions, not reducing them. The country is determined to raise coal production by 50 percent — from 700 million tons to 1 billion tons a year. The country has invested heavily in the coal sector and is asking coal utilities to implement fresh strategies to achieve the new target.

Also, the claim of India’s power grid being 50 percent renewables is misleading. While the total installed renewable capacity is around 40 percent out of the total installed power generation systems in the country, only nine percent of all electricity consumed comes from wind and solar because the so-called green technologies are available much less than are baseload sources. Seventy percent of of all electricity comes from coal, followed by hydroelectric and nuclear. Even if wind and solar ever achieve 80 percent of total installed capacity, the actual generation from them would be less than 20 percent.

Also, there is no imminent threat from the climate as Boris so dramatically claims. Certainly not anything thing like a ticking bomb. Antarctica has been colder during the last four years, polar bears have thrived, islands are gaining land mass, and fewer people die from climate disasters than ever before.

Of course, understanding these realities requires unbiased research of data, which seems to be too much of a bother for Boris Johnson. Perhaps, the prime minister’s aides could read him page 256 of the United Nation’s special report, “Global Warming of 1.5°C.”

The report states that if we do nothing on climate, the subsequent theoretical increase of 3.66°C in temperature by the year 2100 will cost a meager 2.6 percent of the global gross domestic product — a loss that gives no reason to panic nor any justification to declare a climate emergency. And that is assuming U.N. projections are not overstated, which they often are.

To balance the scare tactics of the prime minister, U.K. Chancellor Rishi Sunak employed alluring cliches to promote the financing of climate polices.  “We’re talking about making a tangible difference to people’s lives,” said the chancellor.  “About cheap, reliable and clean electricity to power schools and hospitals in rural Africa. About better coastal defenses in the Philippines and the pacific islands to protect people from storm surges. About everyone, everywhere having fresher water to drink…cleaner air to breathe.” 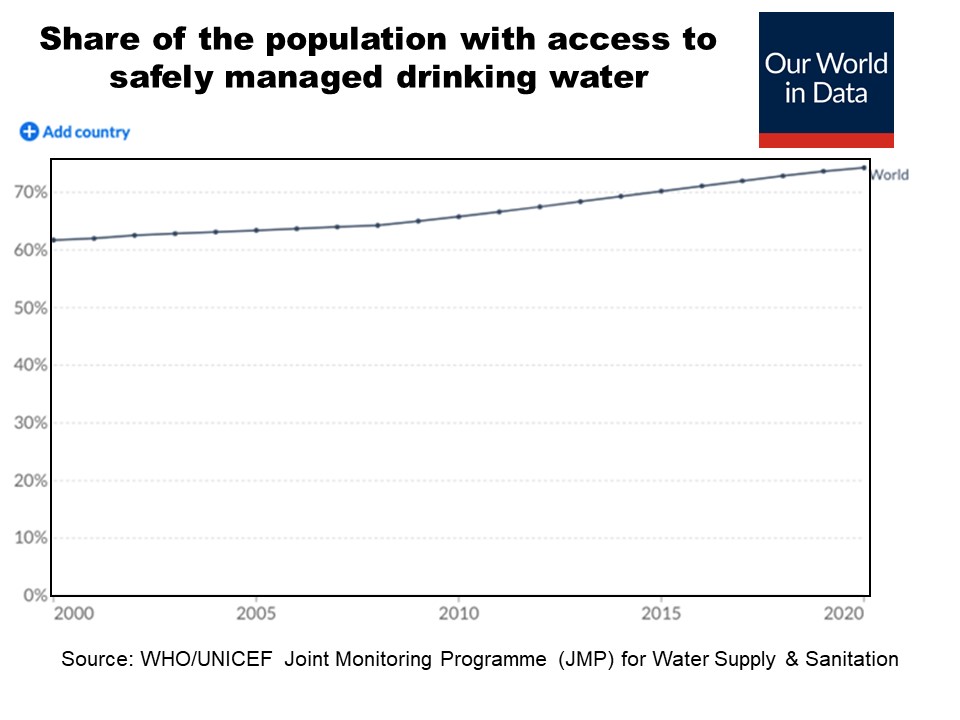 Instead of real-world data, the chancellor uses high-sounding language as poetic musical prelude and endnote to sell his vision of spending money on climate policies for a supposedly better world. He ignores that more people in the world have better access to clean water than ever before in modern history. The share of global population with access to safe drinking water went up from around 60 percent in the year 2000 to around 73 percent in 2020 despite a rapid increase in population and growing groundwater problems in cities.

Western economies — Europe, U.K., and U.S. — that have been dependent on fossil fuels boast some of the cleanest air in the world today. This is because fossil fuels provide the fastest creation of wealth, which can be spent on reducing pollution. Average life expectancy in the world went up from just 45 in 1950 to 71 in recent years. These are all markers of improvement, not degradation. 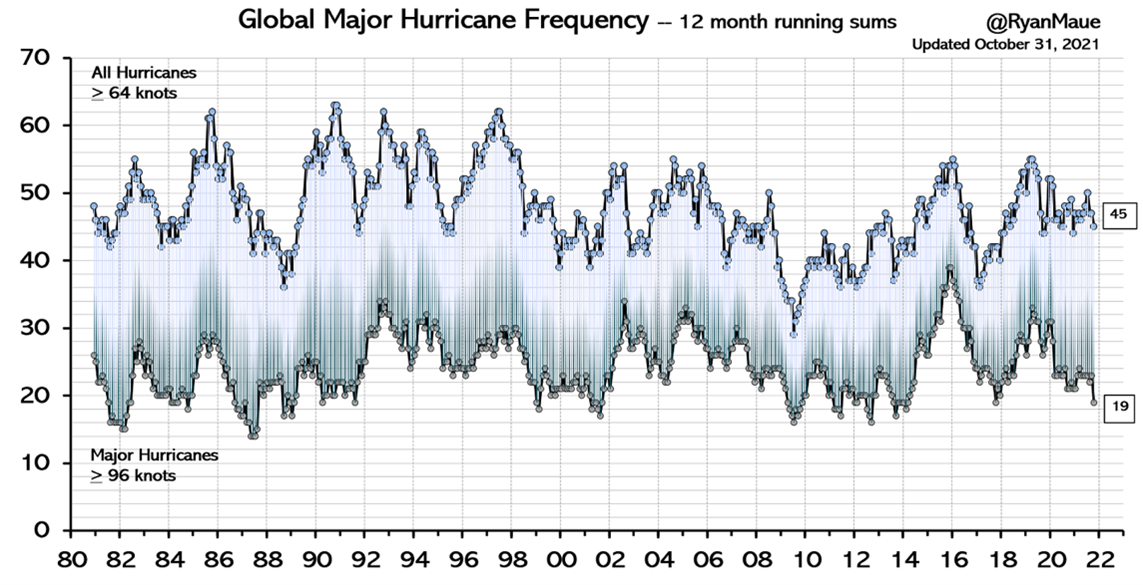 When it comes to extreme weather events, there has been no increase in the global tropical hurricane frequency, a fact that is conveniently overlooked by leaders like Sunak when they bemoan storms in cyclone-prone regions of the world.

If the chancellor really intends to provide affordable and reliable energy to the poor in Africa, then fossil fuels, nuclear, and hydro are the only probable solutions. Wind and solar are unreliable, and available battery technologies are simply not viable for on-demand baseload.

For those who care about facts, it is frustrating to have media-enabled leaders utter absurdities with few holding them to account. Billions of energy-starved people deserve better.

This commentary was first published by Real Clear Energy, November 17, 2021. 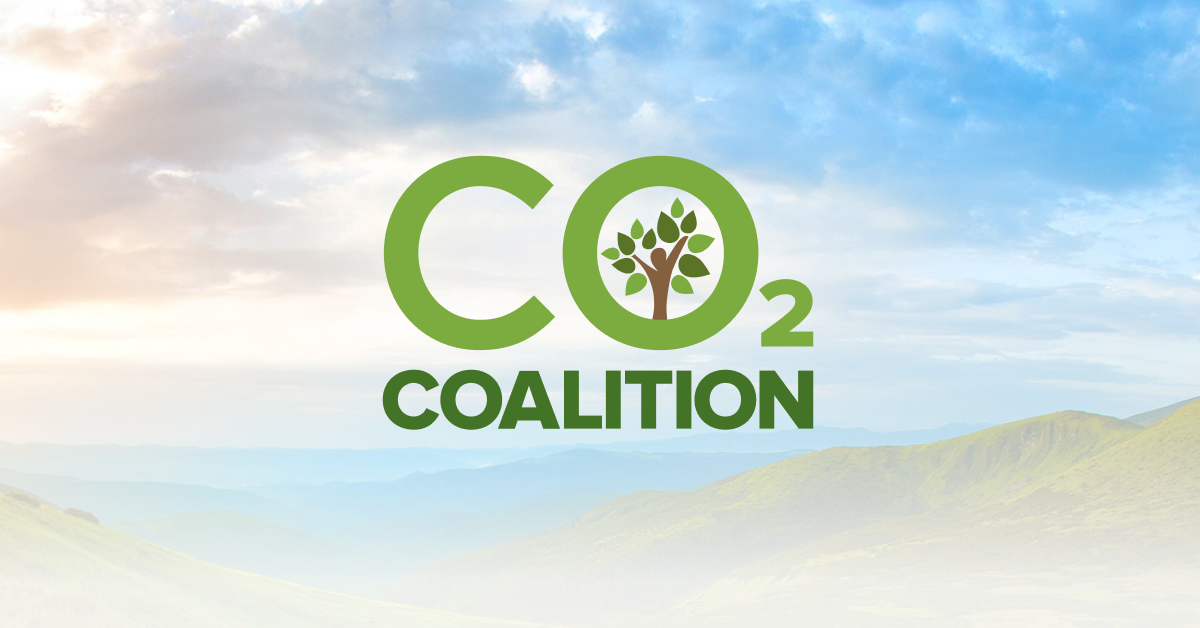