Would Einstein be a global warming skeptic if alive today?

Albert Einstein would almost certainly have been a global warming skeptic if he were alive today. Many distinguished, contemporary scientists are skeptics too.

We are lucky that Einstein left a rich legacy of pithy quotes that reveal how he would probably relate to today’s cult of global warming alarmists. 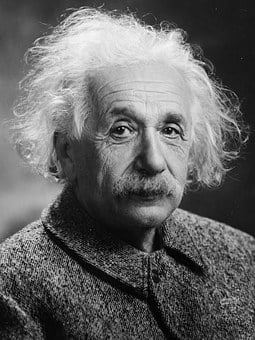 Quite aside from the falseness of the claim, Einstein would have remembered the famous attack on himself, “A Hundred Scientists Against Einstein,” published in Germany in 1931. His response was, “If I were wrong, one would have been enough.”

His view of groupthink was summarized in another comment: “In order to be a member of a flock of sheep, one must, above all, be a sheep oneself!”

Or take the oft repeated statement by climate alarmists, most of whom have little real knowledge about any science: “The science is settled!”

Science, and especially a scientific topic as complicated as the Earth’s climate, is never settled. No credible astronomer, for example, would ever say we know everything about the universe. As Einstein put it, “We still do not know one thousandth of one percent of what nature has revealed to us.”

Einstein himself had shown that Isaac Newton’s wildly successful law of universal gravitation had major deficiencies.

For example, Newtonian gravitation had no room for the gravitational waves, whose existence, at exactly the level Einstein predicted, was first demonstrated by my Princeton friends, Joe Taylor and Russell A. Hulse, for which they received a richly deserved Nobel Prize in 1993.

Most importantly, Einstein would have paid close attention to how well the establishment theory of global warming agreed with experiment. He famously stated: “No amount of experimentation can ever prove me right. A single experiment can prove me wrong.”

The earth has done the kind of experiment Einstein had in mind. It has warmed at a much slower rate, two or three times slower, than models have predicted.

To make matters worse for alarmists, no one knows how much of the relatively small warming is due to increased carbon dioxide.

After all, quite similar warming was observed more than a century ago when CO2 could not have played a role. The alarmist narrative has been proven wrong by experimental observation.

With his reverence for observational fact, Einstein would have been repulsed by the Orwellian demonization of CO2 as “carbon pollution.”

Satellites show that the modest increase of CO2 in the past few decades has produced a measurable greening of the Earth, especially in arid regions.

Plants “breathe in” CO2 and “exhale” oxygen. Commercial growers add as much CO2 as they can afford to their greenhouses, to improve the quality of their flowers, fruits and other plant products. Adult humans breathe out about two pounds of the “pollutant” CO2 per day.

Over most of geological history, concentrations of atmospheric CO2 have been much higher than those today. Both plant and animal life were more abundant when the atmosphere was enriched with three or four times more CO2 than today’s levels.

Climate alarmists are having a difficult time justifying their claims with science.

The Earth stubbornly refuses to warm as quickly as establishment models predict. Extreme weather is not becoming more frequent. Sea levels are rising at about the same rate as they did in the 1800′s. Crop yields break previous records year after year.

Rather than address honest scientific concerns, alarmists attack skeptics as “deniers,” a word deliberately chosen to vilify the person, along with CO2.

Einstein was subject to similar attacks, by envious, prejudiced contemporaries. His advice on how to deal with this was: “Weak people revenge. Strong people forgive. Intelligent people ignore.”

This article appeared on the South Coast Today website at http://www.southcoasttoday.com/opinion/20180323/would-einstein-be-global-warming-skeptic-if-alive-today/1