Late last Friday I was deplatformed for the first time in my 45 years of giving keynote speeches at conferences around the world. The City of Regina, which through my speaker’s bureau had signed a contract with me to kick off their Reimagine Regina Conference in May, caved to local activists and told me I should stay home.

In its announcement regarding my banishment, the city said it did not want “to spark a debate on climate change.” It said the stated goal of the conference is “to make the city’s facilities and operations 100 per cent renewable by 2050.” In other words, municipal officials wanted me to say what they wanted me to say and not what I wanted to say to them. That’s just not how I operate.

Regina is one of at least 54 cities and towns in Canada that have declared a state of “climate emergency.” This is political virtue-signalling at its disingenuous best: the only people fleeing any emergency from these cities are doing so to escape the frigid winter by flying to a warmer country further south. Not a lot of Canadians from our southern regions are heading to Yellowknife or Inuvik, N.W.T, to escape global warming. The climate emergency is at best a bad joke. It might even be amusing were it not threatening to ban the primary energy sources — natural gas, oil and coal — that provide 85 per cent of global energy and make our civilization possible.

Of the 195 countries recognized by the United Nations, Canada is the coldest, with an annual average temperature of -5.35 C. (Russia is number 2 only because it doesn’t have islands situated near the North Pole.) It strikes me as odd that the world’s coldest country worries more about warming than the people of India, Brazil or Saudi Arabia, where it really is warm. These countries don’t have carbon taxes that punish farmers for fuelling their tractors or policies that are aimed at destroying much of their country’s natural resource sector.

Why do I believe CO2 emissions from using fossil fuels to power modern societies are not “pollution” that will bring about the apocalypse? Let me count the ways.

First and foremost, CO2 is the most important food for all life on earth. On both land and in the sea all the carbon for carbon-based life, which is all life, comes from CO2. All green plants on land and all plants in the sea, phytoplankton and kelps, combine CO2 with H2O and by photosynthesis produce the sugars that provide the energy source for all life, including ours. The increase in CO2 due to our emissions has resulted in a greening of the planet and an expansion of forests. This is not contested. 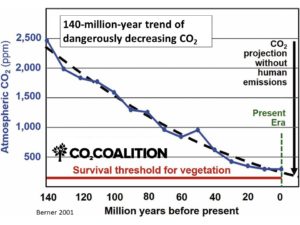 Second, during the hundreds of millions of years since modern life evolved from primitive, single-celled life in the sea, CO2 in the atmosphere and oceans has steadily declined. This is primarily due to the advent of calcifying marine species that use CO2 and calcium dissolved in the sea to make protective shells of calcium carbonate (limestone) for themselves (corals, clams, mussels, shrimp and many planktonic species, etc.). As a result, CO2 in the atmosphere fell from at least 0.6 per cent to 0.018 per cent only 20,000 years ago at the last glacial maximum.

There is no doubt in my mind that on balance our CO2 emissions are 100 per cent positive for the continuation of life on Earth. Commercial greenhouse growers around the world inject CO2 into their greenhouses to double and triple the concentration compared to present atmospheric levels. By doing so they increase the growth and yield of their crops by 20 to 60 per cent. This, too, is uncontested.

I realize this is a hypothesis that not many people have heard about, thanks to the wall of “denial” that has been created by the climate emergency crowd. But I know that this analysis of CO2 history will eventually win the day, as it is a provable fact. I could have presented my ideas to the Regina audience — after all, science is about continual discovery — but they turned me away rather than listen to an alternative point of view.

Patrick Moore, a past president of Greenpeace Canada, is chair of the CO2 Coalition in Washington, D.C.