The case for nixing the Paris Agreement

The United States should withdraw from the Paris Climate Agreement. For too long, well-meaning policymakers have been misled by propaganda, masquerading as science, that more atmospheric carbon dioxide (CO2) will harm the planet. Paris represents the culmination of this campaign. The pact extends into perpetuity, its very terms dispensing with the value of the supposedly previous “seat at the table.” For this and many other reasons, the time to withdraw is now.

Real pollutants from fossil fuel combustion, such as oxides of sulfur, nitrogen and fly ash, are rightly controlled, and by cost-effective technology. But more CO2 is not a pollutant but is a benefit to humanity. The “social cost of carbon,” aka CO2, is negative. It is immoral to prevent developing countries from using reliable, inexpensive fossil fuels to escape centuries of poverty.

Most developing countries have offered no plans to limit CO2 emissions any time soon, rhetoric about Paris‘ universal inclusivity notwithstanding. Without their cooperation, stabilizing atmospheric levels of CO2 is not possible, nor would this stop climate change if it could be done. Climate has been changing since the Earth was formed — some 4.5 billion years ago — according to geological evidence. Climate changes on every time scale — decades, centuries, millennia and even longer periods. 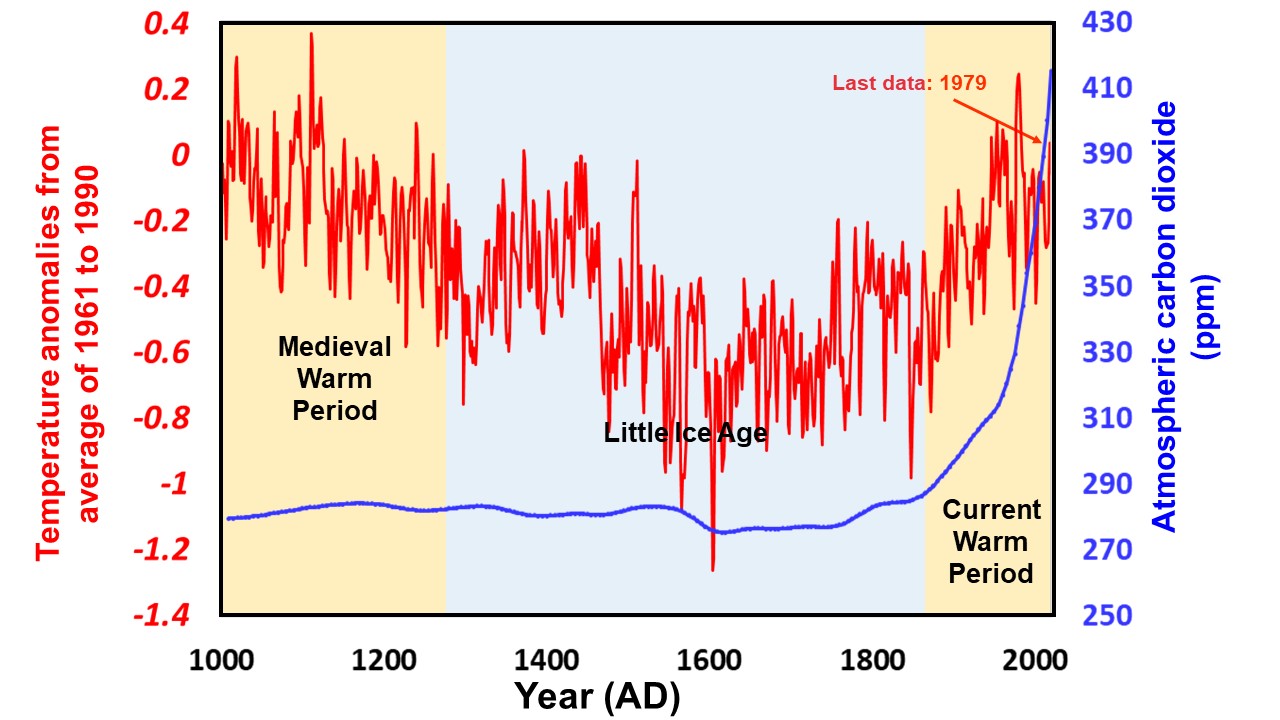 The climate of Greenland really was warm enough for farming around the year 1100, and the Little Ice Age really did drive Norse settlers out of Greenland by the year 1500. Like these changes, the very minor warming we have had over the past few centuries is mostly from non-human causes.

Each human exhales about two pounds of CO2 a day from simply being alive. Living creatures, humans, animals and plants are largely made of carbon. Carbon dioxide is essential to the growth of plants. By the standards of geological history, plants have been coping with a CO2 famine for several tens of millions of years. Satellites already show dramatic greening of the Earth as CO2 levels begin recovery toward their historical norms. These were measured in thousands of parts per million (ppm), not today’s puny 400 ppm.

CO2 is indeed a greenhouse gas, but much less important than the major greenhouse gas, water vapor (H2O) and clouds. Observations show that doubling CO2 will warm the Earth’s surface by around 1 degree Celsius. At the current rate of increase of CO2, it will take more than a century to double. Twice as much CO2 and a modest 1 degree Celsius warming would benefit the world in many ways, extending growing seasons for agriculture, increasing crop yields, and lessening human mortality, which increases in cold weather. And modest warming means that there will also be no dangerous increase in sea levels.

Climate policy, however, poses a grave threat. Yes, those who engineered the Paris Agreement will be upset if the United States withdraws. Withdrawal will also outrage the many who profit from climate alarmism. But remaining in the Paris Agreement will not sit well with many of those who voted for Mr. Trump in part because of his campaign promises to withdraw from the agreement. These voters rightly perceived that the agreement would benefit a privileged international elite, at the expense of the common people of the United States and of the rest of the world.

We should learn from this experience. After withdrawal from the Paris Agreement, the United States should commission a national red-team/blue-team review of the basic science of climate. The Intergovernmental Panel on Climate Change (IPCC) might have played this important role, but its leadership was quickly captured by political operatives, determined to support climate alarmism, even when this was at odds with the findings of honest scientists who wrote technical parts of IPCC reports.

“Heretical,” off-message science has been ruthlessly suppressed to reassure policymakers that they had the backing of “97 percent” of the scientific establishment. It is time to do an honest job on the science of climate.

Regarding policy, Americans never felt compelled to sign up for international folly in the past. We should once again show leadership and walk away from the Paris Agreement.

This article appeared on the Washington Times website at https://www.washingtontimes.com/news/2017/may/23/paris-agreement-should-be-nixed/