Bill has a PhD from Princeton University and an MS From MIT, with emphases on solid state physics and semiconductor devices. He is currently an Independent Research Consultant focused on Integrated Circuits (ICs) and General Optimization Analyses. His personal career-long knowledge and interests in sources of energy are now directed towards rational, reliable global needs of the future

Bill modeled photovoltaic cells as a student in the late ‘50’s and was trained as a nuclear specialist in the US Navy, but the majority of his career was at AT&T Bell Telephone Laboratories, where he  became Head of the Very Large Scale Integration (VLSI) Department. After BTL’s breakup, he served 10 years as a Director of the Semiconductor Research Corporation, a consortium of industry and government to establish roadmaps and to fund PhD research in semiconductors.

He has served and chaired national committees. He has over 60 patents, over 60 peer-reviewed papers and presentations, and has been consistently rated within the top percent of his peers, whether in education or industry. He has authored a book: “Global Warming Temperatures and Projections.”

Fellow of the IEEE, Certificate of Appreciation from the Department of Defense, 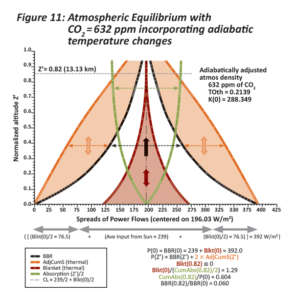 At Professor Happer’s behest, Bill developed during the 00’s a monster spreadsheet model of the atmosphere with 50 slices of a normalized altitude (Z’) from 0.0 to 1.0 (infinite altitude). No supercomputer apps were used; every step is based on a proper understanding of quantum mechanical absorption and Planck reconstruction for altitudes less than Z’=0.82. There is a formal calibration point and a formal idealized calibration plot against which actual simulations can be compared. There are several aspects of these analyses that do NOT seem to be mentioned in IPCC-accepted models, including a “fail/safe” confirmation of a projected surface temperature. A book was published in 2018, but, almost immediately, new insight produced new introductions into the model.