Mike studied meteorology in the United States Navy, and after graduation was assigned as a weather observer/forecaster aboard the aircraft carrier U.S.S. Lexington, where he worked providing weather information for flight operations until 1979.

Upon his honorable discharge from the NAVY, Mike began his television career in Oklahoma City, at KOKH-TV and KWTV. In 1981, Mike was one of the first three weather forecasters in the United States to utilize Doppler radar on the air for severe weather identification and coverage.

He then moved to WPCQ-TV in Charlotte, North Carolina.

In 1983, Mike became the chief meteorologist at KCTV in Kansas City, where he worked for 9 years.

In 1992, he moved to WDAF-TV in Kansas City (now known as FOX4) to replace the legendary Dan Henry, who was retiring. Mike was the chief meteorologist there for 27 years from January 1992 to December 2018, providing weather for the 5, 6, 9, and 10 PM newscasts.

In 1994, Mike was recognized in a national publication, as one of the “top 15 best local weathercasters” in the country.  Thompson ranked among other weathercasters from markets as large as Boston, Washington, D.C., Dallas, San Francisco, and Chicago.  Mike was a recipient of the Kansas City Media Professional’s “Best TV Reporter-Weather” for 1988, 1991, 1993 and inducted into the Hall of Fame in 1994.

In 1997, he was one of 100 meteorologists from across the United States to be personally invited by President Clinton to attend a Global Warming conference in Washington, D.C. At that conference, Vice President Al Gore presented a lecture on the now debunked “hockey stick” graph that attempted to correlate rising atmospheric CO2 levels with rising global temperatures. Mike questioned the voracity of the presentation and it impelled him to embark upon his own research and study of the climate, which continues to this day.

During his tenure as Chief Meteorologist at WDAF-TV (FOX4), Mike originated, organized, wrote, and produced “Weathering the Storm” an educational weather show designed for school children, for 20 years ending in 2018. Hundreds of thousands of children have attended the program, held each year at Kauffman Stadium, in conjunction with the Kansas City Royals.

Between 2006 and 2014, he won six Emmy Awards for his meteorological work on-air and in for his work producing the weather show for School Day at the “K”. Mike also earned a spot in the Guinness Book of World Records for achieving the world’s largest outdoor weather class in 2009, a distinction he holds to this day.

In 2008, Mike was inducted into the National Academy of Television Arts & Sciences Silver Circle at the Mid-America 2008 Emmy Gala in St. Louis.  Every year NATAS inducts television professionals with 25 or more years of outstanding service in television into the prestigious Silver Circle. 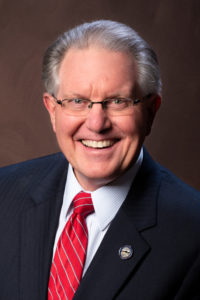 In 2020 Mike took over the 10th District Senate seat in the State of Kansas from retiring Senator Mary Pilcher-Cook.  He successfully ran for re-election to that position in 2020. He is currently the Chairman of the Senate Utilities Committee, and also serves on the Senate Judiciary Committee, Public Health Committee, Local Government Committee, and Transparency and Ethics Committee.

Mike is currently listed as a Policy Advisor for the Heartland Institute.

In his spare time, Mike enjoys speaking, reading, economics, politics, water sports, music, playing the guitar, and BBQ!   He has been married to LeAnne for 46 years. They have three children, 9 grandchildren, and one great-grandchild.