The Governor and other officials have relied heavily on the state’s Climate Action Plans and specifically on the 2018 Pennsylvania Climate Action Plan3 in order to support their claims of current and future devastating impacts of continued CO2-driven warming. Assertions in the Climate Action Plan are refuted by the analysis of Gregory Wrightstone, Executive Director of the CO2 Coalition and an expert reviewer for the U.N. Intergovernmental Panel on Climate Change’s 6th Assessment Report (IPCC – AR6).

Because of DEP’s flawed climatic analysis, the agency’s predictions of drought, flooding and other extreme weather events have no scientific basis.

DEP’s projection of increased flooding is contradicted by data from the Ohio, Allegheny and Susquehanna rivers that show a decline in the size of flood crests in the last 100 years even though the average precipitation has increased by three inches. Although Governor Wolf makes much of Susquehanna River flooding in 2018, that event ranks 31st in the list of greatest floods at Harrisburg and only slightly more than half of the magnitude of the 1972 flood from Tropical Storm Agnes. The IPCC says it “can discern no connection between a modest increase in temperature and any change in flooding worldwide.” 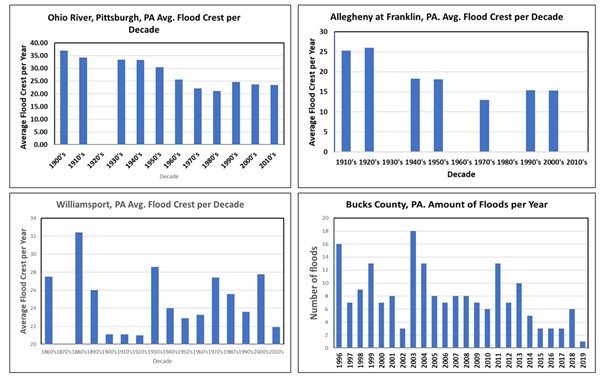 A DEP projection of more drought is unsubstantiated by data showing decreasing aridity in Pennsylvania over the last century while the climate warmed slightly during the period. 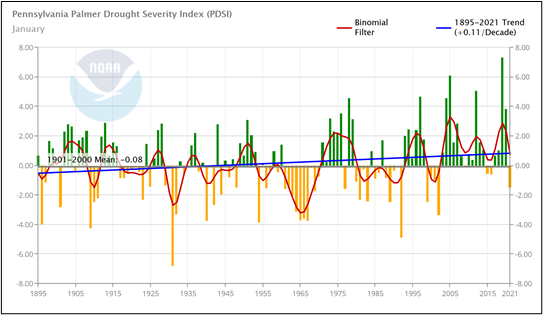 A DEP projection of more heat waves is contrary to data showing a peak in the country’s hot weather occurring in the 1920s and 1930s before CO2 levels began increasing following World War II. 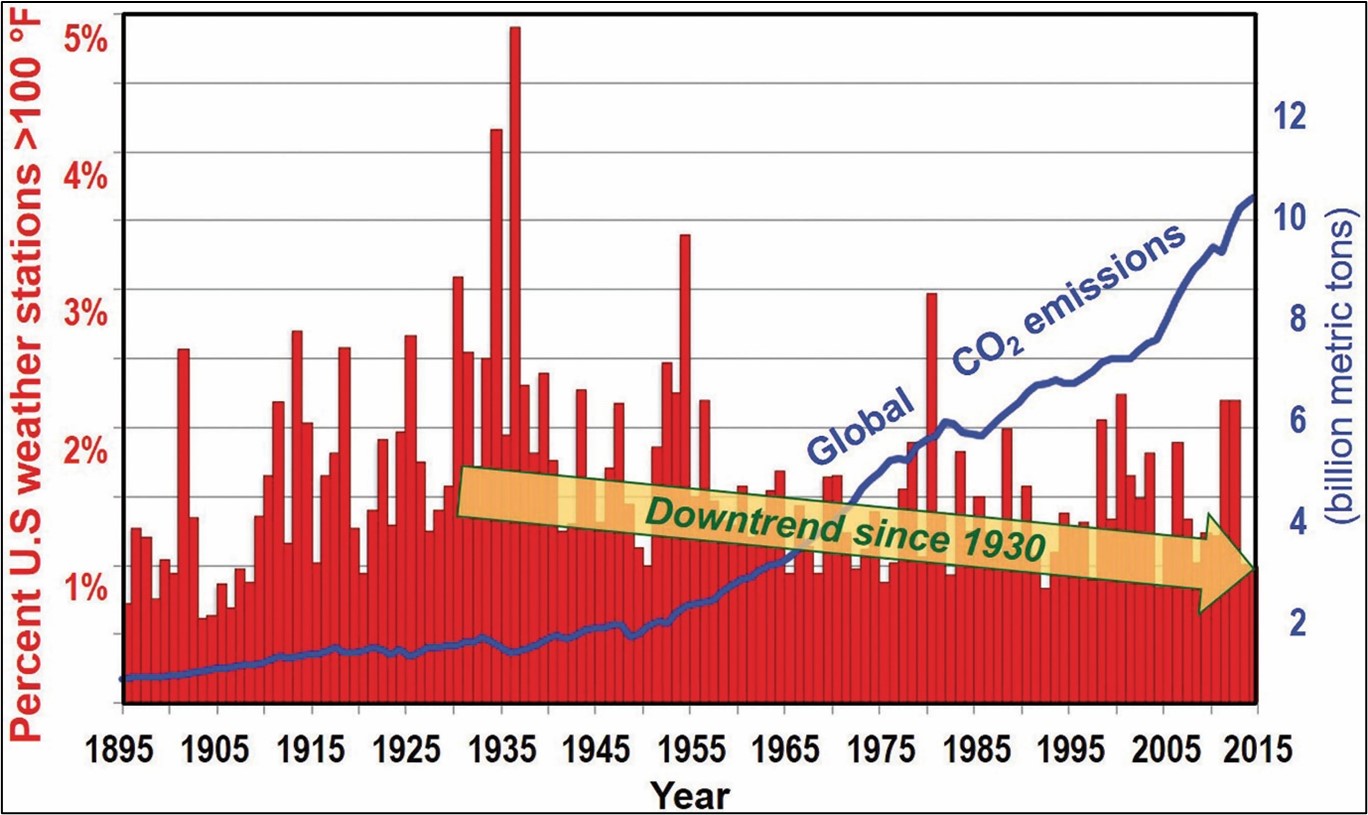 DEP’s projection of health risks from air and water pollution are inconsistent with data from the U.S. Environmental Protection Agency showing double-digit percentage decreases in pollution. Air and water today are cleaner than in more than 100 years and getting cleaner every year. According to the EPA, nationally, concentrations of air pollutants have dropped significantly since 1990. 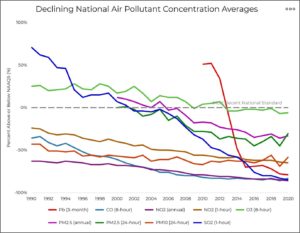 According to DEP’s Climate Assessment, Delaware River Basin communities (including Philadelphia) can expect more frequent flooding and associated disruptions due to sea-level rise that presumably is caused by anthropogenic warming. Fortunately, historical data suggest that is unlikely.

Global sea levels have been rising for over 200 years, long before humans began adding prodigious amounts of CO2 to the atmosphere in the mid-20th century, and oceans are likely to continue to rise whether RGGI is adopted or rejected. Having successfully already adapted to possibly as much as two feet of sea-level rise over the last two centuries, Philadelphia — with modern technology and capabilities — can expect to easily adapt to the projected six to eight inches of rise between now and 2100. 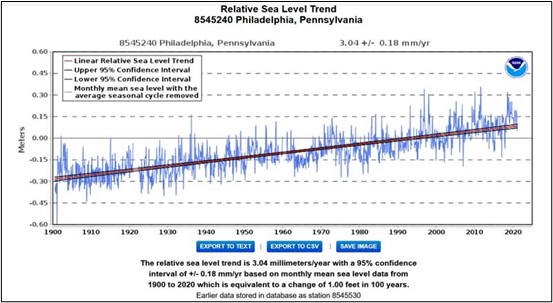 DEP predicts damage to Pennsylvania agriculture, but actual data shows improvements in farm production. Pennsylvania is no different than most of the rest of the globe, which is benefiting from a moderate rise in atmospheric carbon dioxide and natural warming. Over the last 50 years there have been increases in the length of growing seasons and crop production and an overall greening of Earth. 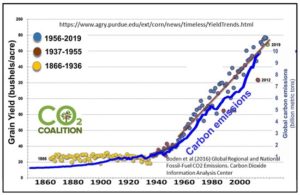 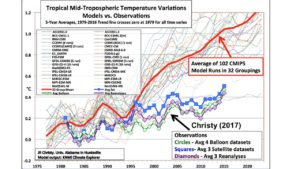 RGGI’s Flawed Use of Climate and CO2-Emission Models

Dr. Patrick J. Michaels, Senior Fellow for the CO2 Coalition and Competitive Enterprise Institute and Past President of the American Association of State Climatologists, found that all but one of 102 computer models used in the Pennsylvania Department of Environmental Protection’s (DEP’s) Climate Action Plan “failed dramatically” in representing how the climate behaved in the past. He suggested that it would have been preferable for the state to have used the one model that more accurately reflected past climatic conditions than to have averaged the results of all 102 irrespective of their accuracy.

In addition, the Pennsylvania analysis uses a CO2-emission model that assumes an unrealistic increase in the use of coal that exceeds some estimates of the quantity of recoverable coal reserves. Correcting for the state’s reliance on flawed analyses reduces the predicted warming by 2050 to less than two degrees Fahrenheit from the state’s projection of 5.4 degrees.

Even if Pennsylvania were to reduce its emissions from electricity to zero, Dr. Michaels says any reduction in temperature or in sea-level rise would be too small to measure.
The Pennsylvania Climate Action Plan report, which serves as the basis for Governor Wolf’s RGGI proposal, needs to be dramatically revised, and should no longer be used as the basis for any policy proposals in its present form, concludes Dr. Michaels.

Pennsylvania Gov. Tom Wolf’s proposal to enter RGGI will be economically damaging and provide no environmental benefits, according to a June 2021 analysis by David T. Stevenson, Director of the Center for Energy & Environment at the Delaware-based Caesar Rodney Institute. The findings are consistent with what Mr. Stevenson found in a 2018 peer-reviewed report published by the Cato Institute.

Mr. Stevenson’s recent analysis says the Wolf administration’s 2020 “Pennsylvania RGGI Modeling Report” predicts economic and environmental benefits on the basis of flawed assumptions. For example, emission reductions are likely overstated in the modeling report because Pennsylvania reductions in fossil fuel use will most likely be replaced by fossil fuel power plants in other states as electric generation and demand from energy-intensive manufacturing shift away from Pennsylvania.

“The assumptions used in the report are flawed as are the forecasted outcomes,” said Mr. Stevenson, author of more than 100 analytic reports. “Using information learned from the decade-old RGGI program it is clear emissions will not be reduced globally, electric rates will rise, and there will be billions of dollars of economic damage if Pennsylvania joins RGGI.”

Mr. Stevenson projects tax losses of $282 million from the economic damage to exceed the $261 million in estimated receipts from the sale of emission allowances. The losses break down as follows: $92 million in corporate income taxes, $102 million in personal income taxes and $88 million in utility gross receipts taxes.

According to the 2018 Stevenson report, RGGI had no effect on carbon dioxide reductions — nor any supposed health benefits when other factors are considered: the effects of regulatory and market forces and the quantity of emissions exported to other states by the importation of power into RGGI states.

The conclusions of the Stevenson report include the following:

Read Now
The CO2 Coalition of climate scientists today released a White Paper analyzing decades of peer-reviewed research on the impact on the oceans of carbon dioxide emissions from the conversion of fossil fuels to energy.  Ocean Health – Is there an “Acidification”  problem? concludes that CO2 is an important plankton food that enriches sea life, and that the term “ocean acidification” is highly misleading. Continue Reading