A Primer on Carbon Dioxide and Climate

A Primer on Carbon Dioxide and Climate 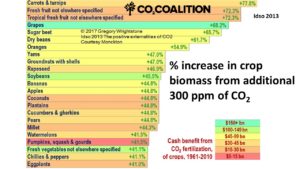 The public requires an informed, dispassionate discussion of how our planet will be affected by CO2 released from the combustion of fossil fuel and other sources. In a white paper, entitled Carbon Dioxide Benefits the World; See for Yourself the CO2 Coalition, a new and independent non-profit organization summarized the scientific case that additional CO2 will be a net benefit for the world.  Following the words of the United States Declaration of Independence, the Coalition believes that “a decent respect to the opinions of mankind” requires that they should declare the causes which impel them to this politically incorrect view—and in more detail than is appropriate for a White Paper. That is the purpose of the present paper, a A Primer on Carbon Dioxide and Climate.

Atmospheric water, H2O, as vapor and clouds, is by far the most important source of greenhouse warming of the Earth’s surface.  Atmospheric CO2 also contributes to greenhouse warming but much less than H2O. More CO2 will cause some additional warming, both directly and with amplification (or possibly attenuation) by feedbacks, which are still very poorly understood.  In addition to modest warming from more CO2, the earth’s temperature is affected by many other factors.  Among these are solar activity, the distribution of atmospheric water vapor and clouds, atmospheric and ocean circulation patterns, volcanic activity, slow changes in the earth’s orbital parameters.  Whether more CO2 will be good or bad for life on earth does not depend on the mere existence of greenhouse warming and related effects from more CO2, like changes in the pH of the oceans, and benefits to plant growth.  The issue is the magnitudes of the effects.  As detailed below, we are persuaded that the net effects of increasing CO2 will be very good for the world, and especially for its human population.

Download the pdf here: A Primer on Carbon Dioxide and Climate

Read Now
This white paper summarizes the views of the CO2 Coalition, an independent non-profit organization that seeks to engage thought leaders, policy makers, and the public in an informed, dispassionate discussion of how our planet will be affected by carbon dioxide (CO2) emissions Continue Reading