“In the study, published in Geophysical Research Letters, Millán and his colleagues estimate that the Tonga eruption sent around 146 teragrams (1 teragram equals a trillion grams) of water vapor into Earth’s stratosphere – equal to 10% of the water already present in that atmospheric layer. That’s nearly four times the amount of water vapor that scientists estimate the 1991 Mount Pinatubo eruption in the Philippines lofted into the stratosphere.”

“Millán analyzed data from the Microwave Limb Sounder (MLS) instrument on NASA’s Aura satellite, which measures atmospheric gases, including water vapor and ozone. After the Tonga volcano erupted, the MLS team started seeing water vapor readings that were off the charts.”

“Volcanic eruptions rarely inject much water into the stratosphere. In the 18 years that NASA has been taking measurements, only two other eruptions – the 2008 Kasatochi event in Alaska and the 2015 Calbuco eruption in Chile – sent appreciable amounts of water vapor to such high altitudes. But those were mere blips compared to the Tonga event, and the water vapor from both previous eruptions dissipated quickly. The excess water vapor injected by the Tonga volcano, on the other hand, could remain in the stratosphere for several years.”

“This extra water vapor could influence atmospheric chemistry, boosting certain chemical reactions that could temporarily worsen depletion of the ozone layer. It could also influence surface temperatures. Massive volcanic eruptions like Krakatoa and Mount Pinatubo typically cool Earth’s surface by ejecting gases, dust, and ash that reflect sunlight back into space. In contrast, the Tonga volcano didn’t inject large amounts of aerosols into the stratosphere, and the huge amounts of water vapor from the eruption may have a small, temporary warming effect, since water vapor traps heat. The effect would dissipate when the extra water vapor cycles out of the stratosphere and would not be enough to noticeably exacerbate climate change effects.” 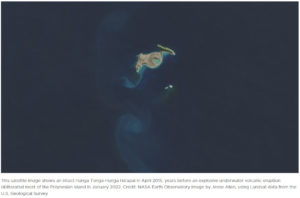