“In the wake of Sen. Joe Manchin’s announcement that he won’t vote for a bill addressing climate change unless inflation slows next month, climate leaders are calling for President Biden to declare climate change a national emergency — and it appears that the White House is seriously considering the move. A formal declaration would open up new possibilities for unilateral action by the executive branch to combat climate change, including halting U.S. exports of crude oil and halting offshore drilling. Biden could even redirect military funding to the construction of renewable energy projects — much as former President Donald Trump diverted more than $18 billion in Pentagon funding to build a wall on the U.S. border with Mexico — and impose trade penalties on countries that permit deforestation, such as the destruction of the Amazon rainforest in Brazil.” 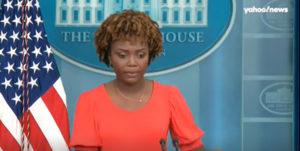