“The findings of both the 2009 and the 2022 Surface Stations studies clearly demonstrate the COOP network’s temperature records—at both USCHN and GHCN stations—have been substantially corrupted. After surveying a comprehensive and representative sample of stations, 96 percent were found to be biased in some way by the heat sink effect, or other heat sources.

Claims by NOAA, NCDC, and NCEI that this data contamination can be statistically adjusted are disingenuous, especially considering the widescale homogenization of good and bad data. Good data exists in the unperturbed stations demonstrated by Watts et al. in 2015, but the amount of bad data from poorly sited stations overwhelms the accurate data from well-sited stations.

It is important to note Watts and his fellow authors found a slight warming trend when examining temperature data from unperturbed stations, which cleaved closely to the findings of the University of Alabama-Huntsville’s satellite-derived temperature record.49 This warming trend, however, is approximately half the claimed rate of increase promoted by many in the climate science community.

In conclusion, the rate of warming as measured by unperturbed surface stations, USCRN, and UAH does not represent a climate crisis.”

Originally published here by Anthony Watts at the Heartland Institute on 27 July 2022. 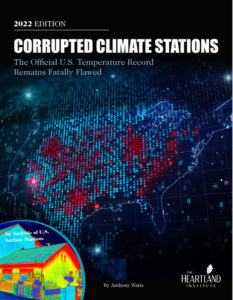