Back to the dark ages?

“UK households might have to turn down their thermostats and switch off lights to avoid blackouts under emergency plans. Government measures to tackle the energy crisis this winter would include appeals to the public to cut down on energy use in the event of an electricity or gas supply shortage. A document of contingency plans by the National Grid seen by The Telegraph showed ministers would use the option if the energy crisis worsened even further. The news comes as EU countries were told to cut their usage by 15 per cent from next month over concerns they will not be able to store enough for winter after Russia reduced its supply of gas on the NordStream pipeline.”

Originally published here at the Daily Mail on 23 July 2022. 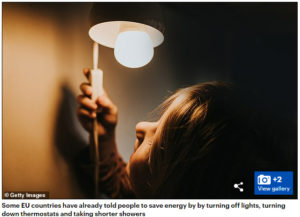