“The [Australian] Opposition Leader [Peter Dutton] said [in a statement] it was ‘high time’ Australia had a ‘honest and informed’ debate on the costs and benefits of developing a domestic nuclear industry.”

“The shadow climate and energy minister has rejected Labor’s opposition to nuclear power as the Coalition declares it will take a more ambitious emissions policy to the next election.” 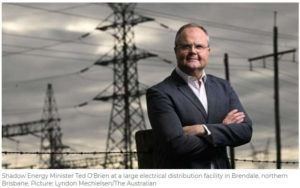