The Jordan B. Peterson Podcast with Dr. Richard Lindzen 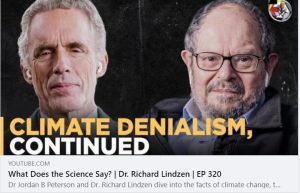 CO2 Coalition Member Dr. Richard Lindzen was recently interviewed on The Jordan B. Peterson Podcast.  The following is a brief overview:

Peterson noted the meritorious accomplishments of Dr. Richard Lindzen, and before proceeding with the interview stated:  “The first thing we’re going to determine before we dive into the topic at hand is why it might be reasonable and important to listen to Dr. Lindzen.”

It should be noted that, among many other accomplishments and recognitions, Peterson stated that Dr. Ricard Lindzen is a dynamical meteorologist. He has contributed to the development of theories for the Hadley Circulation, hydrodynamic instability theory, internal gravity waves, atmospheric tides, and the quasi-biennial oscillation of the stratosphere. His current research is focused on climate sensitivity, the role of cirrus clouds in climate, and the determination of the tropics-to-pole temperature difference. He has attained multiple degrees from Harvard University, and won multiple awards in his field of study such as the Jule Charney award for ‘highly significant research in the atmospheric sciences’. Between 1983 and 2013, he was the Alfred P. Sloan Professor of Atmospheric Sciences at MIT where he earned emeritus status in July of 2013.

Peterson stated that 97% of scientists agree that climate change is real, noting that “this is different from saying that global warming is real, by the way” to which Dr. Lindzen replied:

“There are some issues where I think you could say there is 100% agreement; for instance if you were to say CO2 is a greenhouse gas and adding it will probably create some warming, I don’t think too many people would disagree. I think the only thing would be how much, and many people would think it would be negligible. But no one would disagree with that. Given this telephone game where you can say something perfectly innocent, and the politicians can interpret and say ‘so you agree that we’ll have warming.’ And that warming, however small, you know, they’ll assume is the end of the world. Well, yeah, it’s agreement; but it’s not agreement with what they’re ultimately claiming–that it’s an existential threat.”

The complete interview can be viewed on The Jordan B. Peterson Podcast here.