Candace Owens interviews Executive Director of the CO2 Coalition Gregory Wrightstone to discuss the fabricated climate crisis and the importance of carbon dioxide.

Owens: Welcome back i am very excited about our next guest. I’m a huge fan of his work, which you would know if you’re watching the show and I’ve referenced it several times on various episodes. Gregory Wrightstone is a geologist, Executive Director of the CO2 Coalition and author of the best-selling book “Inconvenient Facts: The Science That Al Gore Doesn’t Want You to Know.” Gregory, welcome to the show!

Wrightstone: Oh, thanks for having me! Thank you for having me on. I’ve got to tell you, though, I didn’t set out to write a book like this. This really started as an exploration for the truth about climate change because I knew, as a scientist and a geologist, some of what we were being told about climate change was just wrong. i suspected other things and so I did my own personal search for the truth and frankly what I found angered me greatly. 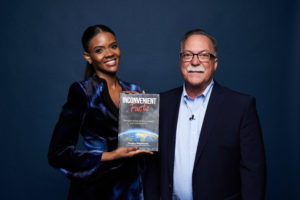 I saw an abuse of the scientific process. I saw things that are accepted as fact and reported unquestioned by the mainstream media being presented as facts when, actually, the science the facts and the data that I looked into disputed so many of these things were being told.

There is no climate crisis. There is no climate emergency. What we see and what I’ve see from scientists who I work with at the CO2 Coalition — some of the top scientists in the world working on this — we see an earth and its eco systems that are thriving and prospering. The vegetation is greening the earth. Humanity and the human condition is improving by almost every metric you look at. Life in our ecosystems is getting better, not spiraling into some apocalyptic scenario.

Owens: Well, that’s a big statement! So, you’re saying there is no climate crisis, period. Wow!

Wrightstone: Yeah, basically what you’re asking me is “Why are they lying to us?” That’s really the underlying question and I always turn that back on the host and on the audience. Every single person in this audience is just as qualified as I am to tell me why they’re doing it. I can prove, I can present the science and facts that say, okay, this is what you’re being told and this is why it’s wrong but every single person here and in your audience watching this, is just as qualified as I am [on that question]. What is it? Is it control? Is it money? Is it funding It could be all those. Some people have said it’s [about] destroying the capitalist system.

I can tell you what’s going on and the proposals are empowering China tremendously in every regard, of course. We’ve just traded [away] our energy dependence from Saudi Arabia. When, the week that Joe Biden was inaugurated, it was the first week since 1985 that we did not import one barrel of oil from Saudi Arabia. We just became energy independent from the Middle East and what’s he want to do? Turn this around to energy interdependence on China.

Owens: I agree with that.

Wrightstone: [Many of AOC’s climate] solutions [are] what I would call solution[s] in search of a problem because if we don’t have a problem, we not only shouldn’t spend $3.5 trillion, we shouldn’t spend one red cent to solve a non-existent crisis and it’s what they’re planning right now. Their solution is to drive everybody away from gas and fossil fuels. And, their solution is to increase energy costs for everybody.

Owens: What is your take on things in terms of the scientific community? Are you optimistic? Are you pessimistic? And, where do we go from here?

Wrightstone: I’m pessimistic in terms of the scientific community. We find that the only people who actually propose things like this are either retired or they’re well enough along in their university career [that] they’re not going to be fired. We see scientists time after time being fired and run out of the scientific community. It takes a very very brave scientist and a brave person to stand up to this whole community saying there’s a 97 percent consensus and we find there aren’t very many brave people in this community and I applaud those that do.

Owens: Right, Well, then, we’re applauding you because you’ve been a brave, brave, brave scientist that’s standing up. I am telling you, guys, this is such an easy read. It is so informative. You must, must, must read it but, also, if you know a child or somebody that’s in school, this is the book that will get them started. Once you see it the truth you cannot unsee it. This is Al Gore’s worst nightmare: “Inconvenient Facts,” Gregory, thank you so much for joining the show!