In Search Of A (Near) Perfect CO2 Global Warming Analogy

Most people have a firm opinion on whether human emissions of carbon dioxide (CO2) are causing unnatural global warming, and hold that opinion without understanding how the molecule physically absorbs and then releases heat energy.

Analogies are a great way to explain science, and I’m going to share the worst and best analogies for how carbon dioxide acts as a greenhouse gas. I will also share why the warming effect of CO2 is limited.

The NASA website for kids contains an illustration of a greenhouse with plants growing on the inside and a snowman on the outside.

The caption is: “The greenhouse effect works much the same way on Earth. Gases in the atmosphere, such as carbon dioxide, trap heat similar to the glass roof of a greenhouse.”

And former U.S. Secretary of State John Kerry described greenhouse gases as a thin layer of gases that acts as a blanket at the edge of our atmosphere and works “exactly like a greenhouse.”

Both of these analogies are terrible because the Earth’s atmosphere is not like a greenhouse roof.

Let’s look at the energy the sun sends to the Earth. The sun emits short wavelength radiation that warms the surface of the Earth.

Seventy percent of that energy is then carried to the upper atmosphere by evaporation and convection (think of thunderhead clouds forming) and then radiated to space.

The remaining 30% escapes to space by long-wavelength infrared radiation (think of heat coming off a toaster). Every day new energy from the sun warms the surface of the Earth and an equal amount escapes back to space.

A greenhouse roof allows the short-wavelength sunlight in and the long-wavelength infrared radiation out but blocks the energy loss caused by convection and evaporation.

Greenhouse gases in the atmosphere work exactly the opposite; they allow heat loss from the surface by evaporation and convection and absorb some of the long-wavelength infrared radiation.

Each of the greenhouse gases absorbs specific wavelengths of infrared radiation and then re-emits that radiation in all directions.

Some of that is directed back towards the surface of the Earth where it is again absorbed and again released. This recycling of heat is the greenhouse gas effect, and it’s nothing like a heat-trapping roof except for the deceptive name.

CO2 absorbs infrared radiation of wavelengths between 14 and 16.5 microns. To understand the scale: it would take about five of these wavelengths laid end to end to equal the diameter of a human hair.

Adding more CO2 means more of these infrared wavelengths can be absorbed. But more CO2 does not mean a proportionately similar increase in recycled heat.

It’s because the Earth radiates a limited amount of those specific wavelengths of heat that CO2 can absorb them.

Dr. Ian Plimer wrote in Heaven and Earth that “Carbon dioxide in the atmosphere operates like a curtain on a window. If you want to keep out light, add a curtain. A second curtain makes little difference, a third curtain makes even less difference, and a fourth curtain is totally ineffectual.”

In his book Unsettled, Dr. Steven Koonin uses a similar analogy that the first few molecules of CO2 in the atmosphere are “…like the first layer of black paint on a clear window.”

He further states that doubling the CO2 concentration from today’s approximately 400 parts per million “doesn’t change things much … due to the ‘painting a black window effect.’”

These analogies are much better as they convey the concept (but without the mathematics) that once you have blocked all the available CO2-specific radiation, more blockage has no further effect.

In my book, I wrote that CO2 is like multiple fish weirs, each placed partially across a river with salmon swimming upstream.

My analogy exemplifies the Arrhenius greenhouse gas theory, which is accepted by the Intergovernmental Panel on Climate Change (IPCC).

The theory states that if all the CO2 emitted by humans since the start of the industrial revolution caused 1°C of global warming, it would take twice that volume to cause the next 1°C of warming, and four times that initial volume for the third 1°C of warming.

This happens because the Earth’s 14 to 16.5-micron infrared radiation is being depleted.

That’s the math, but it still doesn’t explain how the CO2 molecule physically absorbs and then releases long-wavelength infrared radiation. 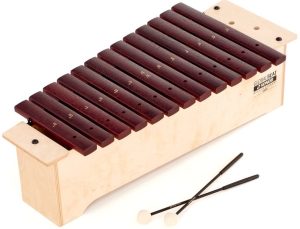 A xylophone bar is loosely attached to the frame near its two ends and when it is struck by a mallet in the middle, the mechanical energy absorbed causes the bar to vibrate and then is released as sound energy in all directions.

A simplified view looks like this (from University Corporation for Atmospheric Research):

Because the whole molecule is spinning in multiple directions, the reradiation is sent in all directions. But only certain wavelengths of energy can act as the xylophone mallet: 14 to 16.5 microns.

Dr. Happer has pointed out that the diagram above is simplified because in the one second it takes for the CO2 molecule to release the energy, it could have up to a billion collisions with other air molecules and transfer the energy to them before it can be released as longwave infrared energy.

Why Today’s Carbon Dioxide Emissions Are Insignificant To Global Warming

The ever-reducing CO2 contribution to global warming looks like this graph, which, ironically, is based on the IPCC’s formula (from Inconvenient Facts by Gregory Wrightstone):

On the graph above, consider that the pre-industrial (circa 1875) atmospheric CO2 level was about 280 parts per million (ppm), and today it is about 420 ppm—an increase of 140 ppm.

As a rough approximation, the three bars labeled 350, 400, and 450 ppm represent this past increase in CO2, and the sum of the global warming temperature increases associated with those three bars is about 0.7°C.

The global warming associated with those four bars is only 0.65°C. The graph shows it keeps taking more CO2 to achieve a smaller amount of global warming.

The above graph suggests global warming from increasing CO2never stops, but we know from ancient climates that even 12 times today’s CO2 concentrations did not cause runaway global warming.

Drs. Happer, Koonin, and Lindzen submitted to the U.S. (Northern California) District Court in 2021 that minor changes in cloud cover and convection currents can have a bigger effect on the Earth’s surface temperature than major increases in CO2.

This is because CO2 is well mixed throughout the entire 80-kilometer thickness of the atmosphere. As more CO2 is added, the chances of long-wavelength infrared radiation re-emitted by a CO2 molecule reaching the surface of the Earth is greatly reduced because it is likely to be absorbed by another CO2 molecule closer to the Earth.

That lower altitude CO2 molecule would most probably lose that extra energy in a collision with another air molecule and promote more air convection currents to the upper atmosphere.

Happer, Koonin, and Lindzen submitted that at today’s concentration, only CO2 molecules a few hundred meters above the ground re-emit long-wavelength infrared radiation that makes it back to the surface of the Earth.

Future CO2 emissions will result in little or no global warming because there is a limited supply of the 14- to 16.5-micron infrared radiation to absorb, and the new emissions will be well mixed in the atmosphere, most too far above the Earth to cause surface warming.

The CO2 molecule is like a xylophone bar but is only activated by specific wavelengths of heat. Then like sound, that energy is sent in all directions.

Note to NASA and John Kerry: That’s nothing like a greenhouse roof.

This commentary was first published at Climate Change Dispatch, January 23, 2023, and can be accessed here.

CO2 Coalition Member Ron Barmby (www.ronaldbarmby.ca) is a Professional Engineer with a Bachelor’s and Master’s degree, whose 40+ year career in the energy sector has taken him to over 40 countries on five continents. His book, Sunlight on Climate Change: A Heretic’s Guide to Global Climate Hysteria (Amazon, Barnes & Noble), explains in layman’s terms the science of how natural and human-caused global warming work.