The Koonin-Dessler Debate (Part I)

There was a 49-to-24 percent pro-skeptic edge at the beginning but after the debate, the skeptics’ lead grew to 73-to-19 percent, wow. Maybe some of the skeptics pretended to be less skeptical in order to increase the positive shift caused by the arguments?

Congratulations to Dr Koonin. Of course, I don’t want to minimize his achievement but it is easier to argue on our side when the truth silently but unambiguously stands on the same side. [joke based on facts]

The debate I announced here between Steve Koonin and Andy Dessler took place Monday August 15th, it was very educational and illuminating. I will try and write more about it in a few days.

In short Andy Dessler said that economic models suggest that climate change is a negative for human civilization and not positive at all. But he avoided putting any numbers to this assertion.

Dessler believes that wind and solar produce electricity cheaper than fossil fuels, and that they can provide most of our power. Koonin counters that the only reason wind and solar are cheaper is that the cost of fossil fuel backup and the required changes to the U.S. grid are not included in the solar and wind costs. Koonin shows an estimate of $2.4 trillion to upgrade our electric grid to work with mostly wind and solar.

Koonin stated that the costs of climate change are minimal, and in 100 years will not be noticeable because the world economy will grow so much in that time. Climate change, even in the worse scenarios, only reduces growth very slightly, by 4% or less, and everyone will still be better off. He notes that in the past global warming and climate change have benefited mankind since people are much better off today and much more resilient to climate change than 100 years ago. He also points out that the poor of today should not be made to suffer because the elites (that is the U.S. and the western world) believe, without evidence and only based on models, that fossil fuels are polluting. He adds that solar and wind are not pollution free.

“The elite’s environmental deterioration is often the common man’s improved standard of living.” From “Up and down with ecology- the ‘issue attention cycle,’” by Anthony Downs (link)

At the end of this very interesting Oxford-style debate in the New York Sheen Center, these were the results:

Obviously Koonin won, the swing was 25% in his favor. Let us hope that these results are not changed online like they were in the last big climate change debate.

Authored by Andy May and originally published at Petrophysicist on August 15, 2022 here. 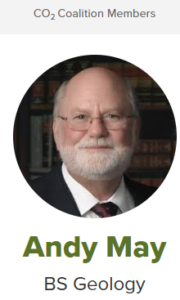