I want to thank Dr. Alan Longhurst for alerting me to the BBC’s fearmongering. He requested that I address the media’s perversion of science. Dr. Longhurst (now 97 years-old) is one of the world’s premiere oceanographers, inventor of the Longhurst-Hardy Plankton Recorder, served as the first Director of the Southwest Fisheries Science Center of the US National Marine Fisheries Service and Director of the esteemed Marine Ecology Laboratory of Canada’s Bedford Institute of Oceanography, among other prestigious positions and tropical research.

(The photos and captions are screenshots from BBC: Mangrove forests: How 40 million Australian trees died of thirst.) 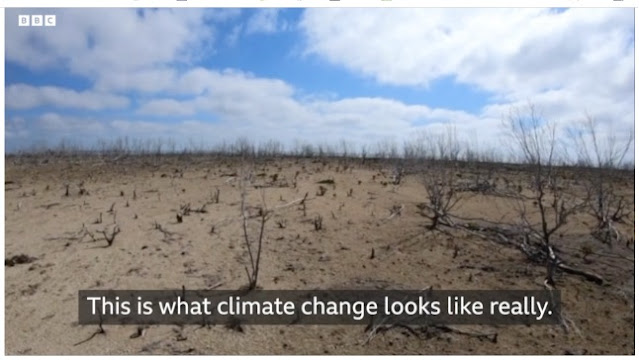 The BBC’s short video begins by showing devastated mangrove forests form northern Australia’s Gulf of Carpentaria from a 2015-2016 die-off. The BBC and ABC (Australian Broadcasting Company) framed this natural event as a human-caused climate change disaster, to perpetuate the myth of a climate crisis.

Mangrove specialist Dr Norman Duke attributed the episodic 2015 die-off to a 40 cm drop in sea level for 6 months due to an El Nino that caused the mangroves to “die of thirst”. Duke acknowledged that it is well known that El Ninos naturally cause such major drops in sea level in the western Pacific. But there is no evidence, nor any consensus, that El Ninos have been made worse by rising CO2. It is known however, that El Nino activity has increased over the last 6000 years as the earth cooled since the Holocene Optimum due to changes in the sun’s orbital cycles. 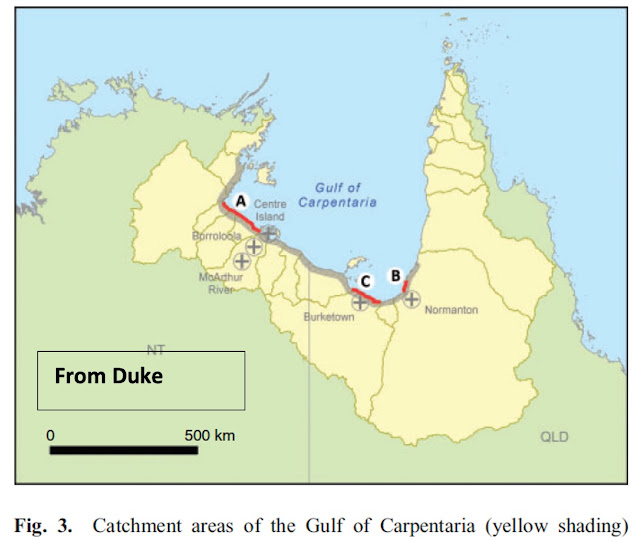 Duke estimated that about 7,400 hectares (74 km2) of mangroves were lost. That would amount to no more than 2% of the total mangrove covered forests in the Gulf of Carpentaria. Mangroves are salt-tolerant shrubs and trees that grow in warm, coastal waters. The areas of severe dieback matched zonation contours, where higher elevations were drier and most vulnerable to sea level fall.

In 2017, Duke published, “Large-scale dieback of mangroves in Australia’s Gulf of Carpentaria: a severe ecosystem response, coincidental with an unusually extreme weather event”. He reported that mangrove diebacks “occurred when regional annual rainfall levels were low, temperatures were high and sea levels were notably lower at the time.” And those conditions correlated with “the El Nino–Southern Oscillation (ENSO) cycle for this region”.

Although mangroves are tropical, and their expansion is linked to warmer conditions, and are known to be reasonably heat tolerant, Duke (2017) attempted to draw a connection with global warming, mentioning there were exceptionally high temperatures recorded at the time and “coincidental with heat-stressed coral bleaching”. Coral bleaching attributed to global warming was being tearfully pushed by Duke’s colleague Terry Hughes. Hughes’ catastrophic global warming narrative is now being refuted by the rapidly rebounding Great Barrier Reef corals. Such good news might be the driving force for Duke and the BBC to resurrect a catastrophic mangrove narrative to protect and support inane climate crisis narratives.

Duke (2017) had noted mangrove losses and retreat were linked to drought, decreased precipitation and temporary drops in sea level. All those weather conditions, including warmer temperatures due to reduced cloud cover, are all associated with El Nino events, as warm tropical waters slosh eastward across the Pacific. Falsely, the BBC, ABC and Duke are now oddly claiming the mangrove die-off and El Nino connection is newly discovered. 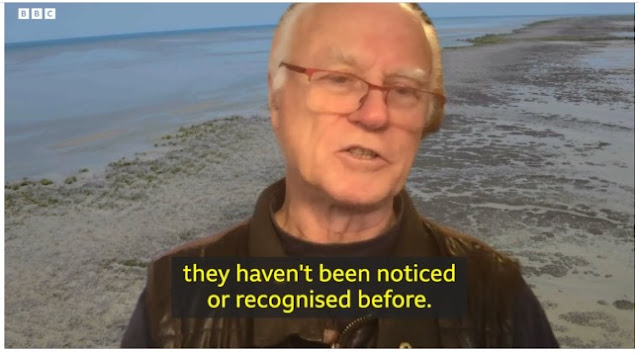 But others had also reported the El Nino effect at least 5 years ago. Lovelock (2017) in Mangrove dieback during fluctuating sea levels wrote “During El Niño, weak equatorial trade winds cause the thermocline to shoal in the tropical western Pacific and the presence of cool water results in sea levels that can be lower by 20–30 cm”. “Because both low sea level and low rainfall co-occur during El Niño years in the Indo-Pacific region, intensification of ENSO in the coming decades with climate change may be particularly unfavorable for productivity of mangrove forest ecosystems.”

Still the BBC and Duke doubled down on a climate crisis connection with transparent idiocy and sleight of hand. They seamlessly switched from blaming a natural fall in sea level for the die-off, to expressing concern that rising sea levels from global warming would hinder mangrove recovery. Yet that desperate claim is easily refuted, and in fact has been refuted already in the peer-reviewed scientific literature. 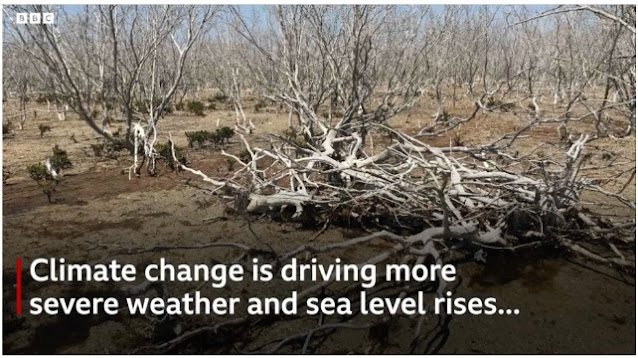 In 2016 Asbridge published “Mangrove response to environmental change in Australia’s Gulf of Carpentaria”. That study concluded, “increased amounts of rainfall and associated flooding and sea level rise were responsible for recent seaward and landward extension of mangroves in this region.” For the period 1987–2014, “mangroves were observed to have extended seawards by up to 1.9 km (perpendicular to the coastline), with inland intrusion occurring along many of the rivers and rivulets in the tidal reaches.”

But such knowledge did not prevent Duke and the BBC from descending into the depths of stupidity and call for paradoxical, useless and expensive remedies to “save” the mangroves. Duke wants to water the mangroves from the air or from ships to prevent them from drying and dying. The rationale for such stupidity: mangroves store carbon. They worried that the mangrove die-off released “1 million tonnes of carbon into the air”, and the ABC added that’s the “equivalent to 1,000 jumbo jets flying return from Sydney to Paris.” But mangroves have naturally dried and died before. No wonder great scientists like Longhurst fear the current perversion of science driven by climate alarmism.

Authored by Jim Steele and originally published at A Walk On The Natural Side on 15 August 2022 here.

Jim Steele is a Member of the CO2 Coalition. He is an ecologist who was appointed Director of San Francisco State University’s Sierra Nevada Field Campus by the Dean of the College of Science and Engineering in 1984 and retired as Director in 2010. His degrees are MA (Biology) and BS (Biology).