Kentucky Floods: Tragic, But Not Unprecedented Nor Climate Change

Recent flooding in Kentucky caused VP Kamala Harris to link it to climate change and one resident told Sky News that the flooding is the “worst I’ve ever seen.” That is likely true, but not very meaningful in terms of weather or climate history.

His grandparents and great grandparents, however, witnessed much higher floods during their lifetimes. A much larger flood occurred in 1913 when phenomenal amounts of rain fell over a one week period. The river reached widths of 2-5 miles in parts of Hopkins County,

That flood was eclipsed by the largest flood on record in Kentucky during January 1937  – 21 inches at Hopkinsville.

Finally, precipitation records show no increase in precipitation for Kentucky. To summarize, the recent flooding in Kentucky was tragic, but not unprecedented and not related to man-made climate change. At all. 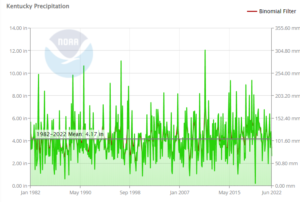 Gregory Wrightstone is the Executive Director of the CO2 Coalition as well as a geologist (BS and MS in Geology), bestselling author (Inconvenient Facts), and an Expert Reviewer for the Intergovernmental Panel on Climate Change (AR6).