Andrew Dessler and Steven Koonin will debate the resolution “Climate science compels us to make large and rapid reductions in greenhouse gas emissions.” Dessler will take the affirmative, and Koonin will take the negative. Dessler is a Professor of Atmospheric Science at Texas A&M University and Koonin is a Professor of Civil and Urban Engineering at NYU, his background is in theoretical physics.

They had separate back-to-back long-form interviews with Joe Rogan this past winter, Koonin’s interview is here, and Dessler’s is here. Koonin’s best-selling book, Unsettled, was focus of both interviews. Koonin’s book emphasizes that the ideas that humans are causing climate change and climate change is dangerous are not “settled” facts and may very well be incorrect. Dessler did not dispute the facts and analysis presented in Koonin’s book but thought that Koonin did not tell the whole story about human-caused climate change. This debate will allow them to discuss their differences on climate change, it should be very interesting.

The debate will convene at The Sheen Center, 18 Bleecker Street in Lower Manhattan, at 6:30 pm East Coast time on Monday, August 15, 2022. Tickets are available to attend in person or to participate in the live stream. A recording of the event will also be available about a week after the debate. I will be watching the debate on the live stream ($7.43 with tax); I hope all of you do as well.

There will be the traditional pre- and post-debate polls of the in-person audience views on the debate resolution, it isn’t clear if the on-line audience will be polled before and after. I’ll let you know when I find out. You might recall that in the last major climate change debate in 2007, at IQ2US, the website was tampered with and changed to report the wrong results, see here for the details. I notice that sometime in the past few months, the IQ2US results for the 2007 debate have been removed entirely, even the false results are gone. 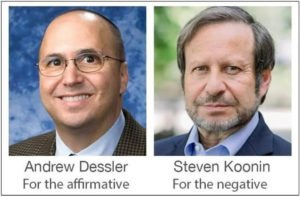 Originally published here at Andy May Petrophysicist on 30 July 2022.

Andy May is a Member of the CO2 Coalition who is a petrophysicist, paleoclimate expert, and author of four books on climate and Kansas history. His latest book is The Great Climate Debate: Karoly vs. Happer.