Unfortunately, nuclear will probably not be able to add additional new generating capacity before 2050.

Given the current status of nuclear power, it’s highly unlikely that the supply of electricity from nuclear reactors can be substantively increased before 2050.

As a result, only wind and PV solar will be available for attempting to achieve net-zero carbon by 2050 from a combination of sources.

(Alternatives 1 and 2 utilize the same step 1 and step 2 format of the precious articles.)

Step 1: Wind will be used to replace all the electricity generated by fossil fuels in 2021.

Step 2: PV solar will be used to supply the electricity needed when light vehicles are all battery-powered, and homes use electricity for heating rather than natural gas.

Steps 1 will use PV solar while step 2 will use wind, effectively reversing Alternative 1.

Using the conclusions derived from the previous articles the number of wind turbines and the amount of PV solar required for Alternative 1 are as follows:

In addition to these, wind and solar are needed to produce the hydrogen for carbon free steel and cement.

The above totals must be divided by 28 years to determine the annual requirements until 2050, as shown in the following table.

The following table summarizes the results. 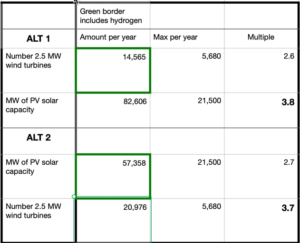 Note that the amount of capacity to supply hydrogen is included where the table is boarded in  green.

Alternate 1 is limited by the required amount of PV solar which is 3.8 times the amount ever installed in a year.

Alternate 2 is limited by the required number of new 2.5 MW wind turbines which is 3.7 times the number ever installed in a year.

Note also, in every instance, whether it be wind or PV solar, the amount of capacity that must be added annually, between now and 2050, far exceeds the largest capacity addition of the same type ever installed in a single year.

In alternate 2, if the size of the wind turbines is doubled, it will still require installing nearly twice the  number of units ever installed in a single year.

In addition, wind turbines have an expected life of 20 years. This means that:

(The same is true for PV solar which would increase the amount of PV solar needed.)

Batteries are required to provide back up for when the wind doesn’t blow. No battery has yet been invented that can provide the needed amount of storage to replace the electricity lost if the wind fails to blow for a week or two.

Storage, using batteries that have yet to be developed, will also be required, which further precludes the possibility that wind energy, or PV solar, can achieve net-zero carbon.

Use this link in an email to let others know about this article https://bit.ly/3NGE1uo.

Donn Dears is a retired engineer and senior executive of General Electric Co. under CEO Jack Welch; member of the CO2 Coalition, Arlington, Virginia; and author of five books, including “Net-Zero Carbon: The Climate Policy Destroying America.” Documents supporting the above conclusions are available at www.powerforusa.com.

Originally published here at the CO2 Coalition on 21 June 2022.