Efforts to increase Africans’ access to electricity through use of hydrocarbons continue despite countervailing moves to limit financing of fossil fuel projects.

Africa’s energy needs are unlike anywhere else in the world. As recently as 2016, two in every three Africans lacked access to electricity. Per capita access is shocking. More than 40 percent of continent’s 1.37 billion people have no electricity. That’s a population 65 percent larger than that of the U.S. that does not have so much as a light bulb to read at night — never mind air conditioning or Netflix. 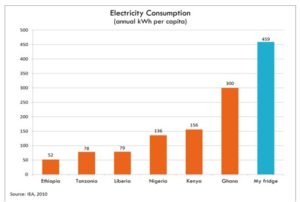 Image: A large household refrigerator in the US consumes 100 times more electricity than an average Nigerian, supposedly the fastest growing economy in West Africa.
Source: https://www.cgdev.org/blog/my-fridge-versus-power-africa

A 2010 comparison by the International Energy Agency showed that per capita consumption in many African countries was less than that of a refrigerator. These low levels of energy consumption reflect depressed economic activity and serious obstacles for 600 million Africans seeking to escape perpetual poverty.

Notwithstanding declarations by funding organization to withhold financing of fossil fuel development, there has been renewed interest from energy giants to exploit African hydrocarbon reserves. Egypt, Gambia, Rwanda, Mozambique, Namibia, Mauritania and other countries are handing out exploration and drilling licenses to oil and gas companies.

One of the biggest announcements in 2021 was from Zimbabwe, which is infamous for its inflation and broken economy. The country’s Muzarabani prospect is believed to hold 8.2 trillion cubic feet of gas and 247 million barrels of condensate. Drilling is set to commence in the first half of 2022 and promises to be a transformational event for the economy.

One of Africa’s poorest countries, the Congo, has harnessed only four peercent of its hydrocarbon reserves. Utilizing them will be a key factor in the war-torn country making meaningful economic progress.

In Kenya, the government will approve a $3.4 billion oil project that is expected to produce 585 million barrels of oil starting in 2025. The country is also constructing a 512-mile-long pipeline to its Indian Ocean port for exporting oil.

Morocco will be looking to capitalize on recent discoveries in its offshore fields. Last month, significant volumes of natural gas were discovered at the Anchois prospect off the coast.

Ghana is aiming to become West Africa’s Liquified Natural Gas hub, as production is set to commence at the Tema LNG terminal, which will pump out 225 million standard cubic feet of gas every day beginning this summer.

These are a fraction of the many ongoing African oil and gas projects, which are expected to continue far into the future.  As they should. Africa’s ambitions for hydrocarbon development are just and should not be disrupted for the sake of questionable climate goals.

Nigeria’s Vice President recently pointed out, “Efforts to restrict fossil fuel investments in Africa are even harder to stomach because many of the wealthy countries behind them — including Japan, the United Kingdom, and the United States — include natural gas in their own multi-decade plans to transition to clean energy.”

Of  course, these very same countries and others have used these fuels to create the unprecedented wealth they enjoy today.

This commentary was first published on February 21, 2022 at humanevents.com