President Joe Biden wasted no time in politicizing the recent tornado tragedy that claimed nearly 100 lives in Kentucky, Illinois, Arkansas, Tennessee, and Missouri. Speaking less than 24 hours after the devastation of communities and lives, Biden linked the storms to man-made climate change.

“All I know is that the intensity of the weather across the board has some impacts as a consequence of the warming of the planet and climate change,” Biden said. “The fact is that we all know everything is more intense when the climate is warming. Everything. And obviously it has some impact here.”

Is that really the case? Have violent tornadoes been increasing? The answer to that question is clear, but you won’t find the answer at the agency most responsible for monitoring such things. It appears that the National Oceanic and Atmospheric Administration (NOAA) is playing games with tornado data. In 2017, while researching tornado data, I archived the NOAA site’s page on tornadoes and data. At the time, NOAA specifically warned that pre-Doppler radar records of tornadoes (before 1995) are unreliable:

“One of the main difficulties with tornado records is that a tornado, or evidence of a tornado, must have been observed. Unlike rainfall or temperature, which may be measured by a fixed instrument, tornadoes are short-lived and very unpredictable. A tornado in a largely unoccupied region is not likely to be documented. Many significant tornadoes may not have made it into the historical record since Tornado Alley was very sparsely populated during the early 20th Century.”

Because of this, NOAA recommended (at the time) only using the strongest tornadoes as a measure of pre-Doppler numbers and provided this chart that documented an overall decrease in the number of strong and violent storms that were categorized as >EF 3 (I have added the carbon emissions to the chart). 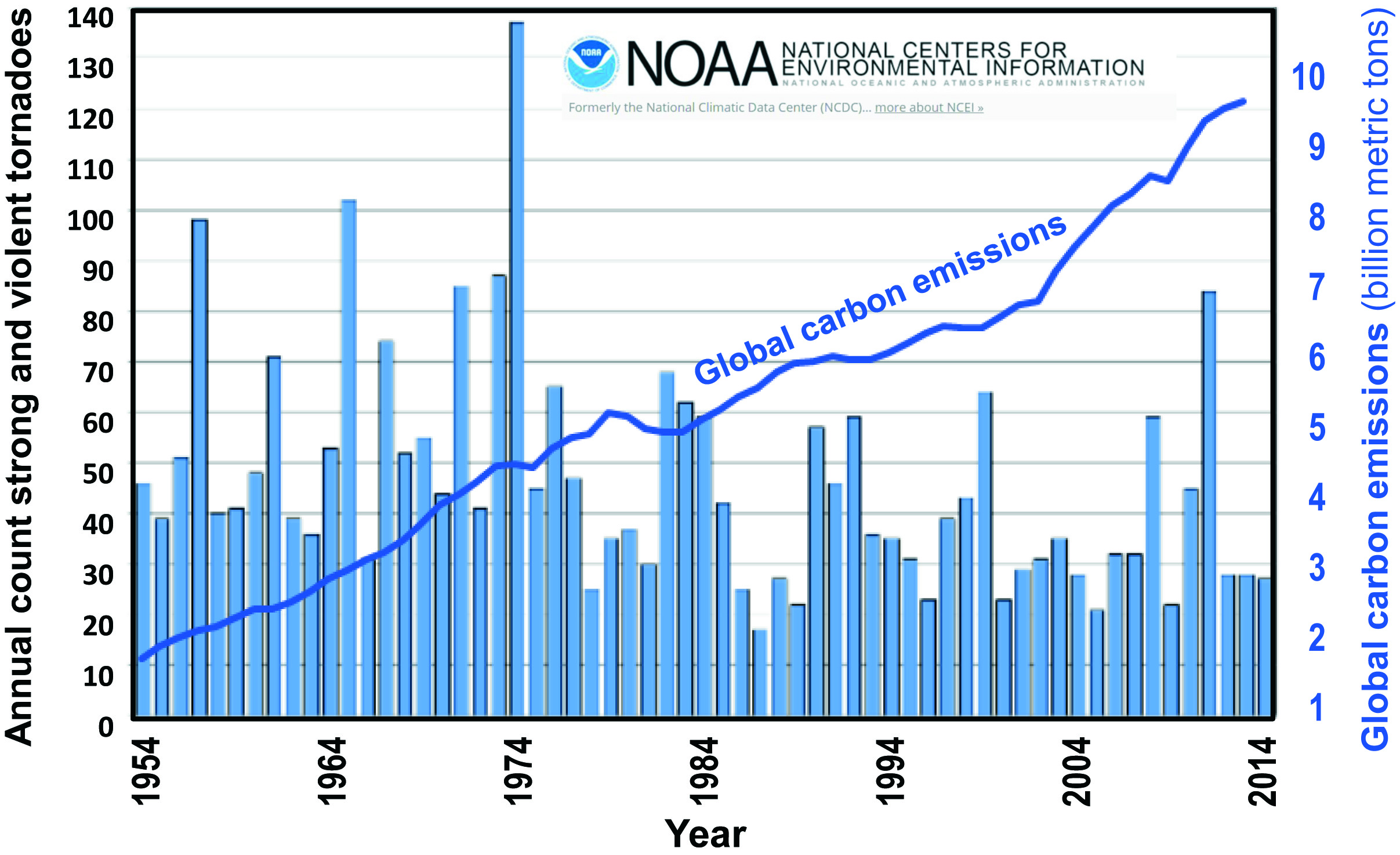 Accessing the very same link for NOAA today takes one to their latest iteration, which showcases a chart of ALL tornadoes dating back to 1950 and shows a steady and significant rise in the number of tornadoes from 1950 to the late 1990s. Bear in mind, that just a few years ago, NOAA specifically warned against using exactly this data because it would under-count the numbers before 1995. 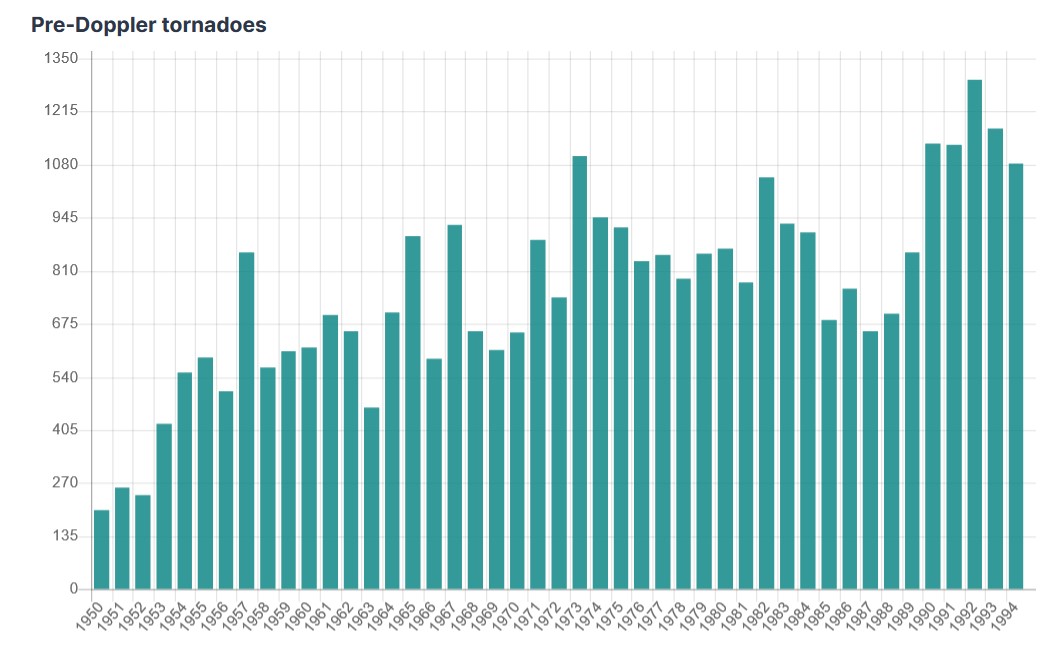 Figure 4, below, is a chart of all Doppler-era tornadoes showing no increase at all. 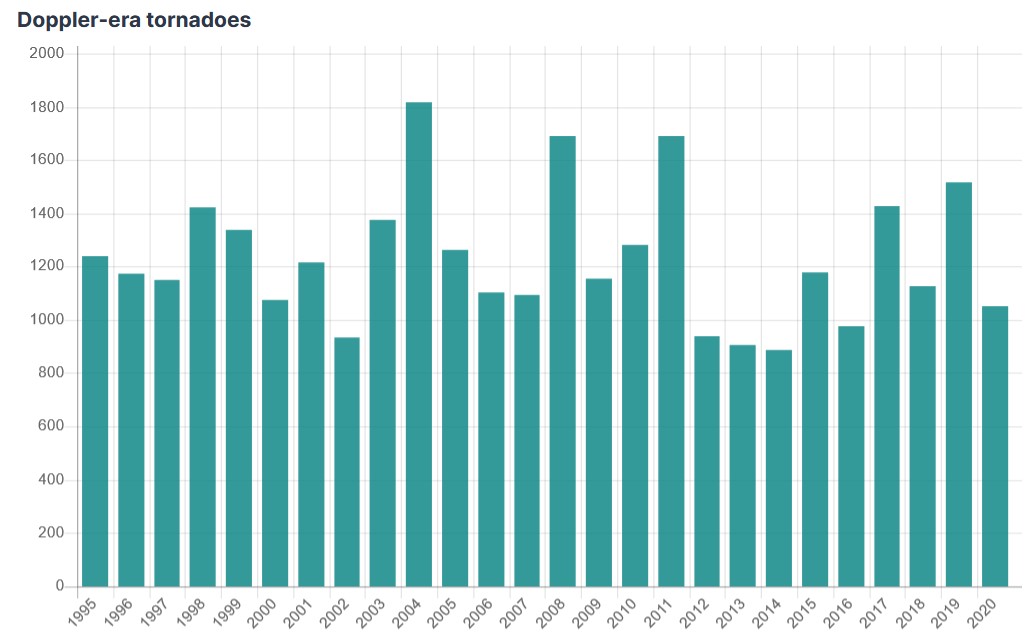 All of this begs the question: Why would a government agency promote flawed data? The answer is simple: It “confirms” their preconceived notion of increasing severe weather and provides support for alarming claims of ever-increasing death and destruction.

You can be sure that Joe Biden will not be the last to use these deaths and this tornado deception to spread fear and alarm to support their plans to spend trillions of dollars to solve a non-existent climate crisis. The Biden administration should “follow the science” and get to the business of helping the victims and stop spreading misinformation.

Gregory Wrightstone is a geologist, executive director of the CO2 Coalition, Arlington, Va., and author of “Inconvenient Facts: The science that Al Gore doesn’t want you to know.”