” A huge, swirling pile of trash in the Pacific Ocean is growing faster than expected and is now three times the size of France. According to a three-year study published in Scientific Reports Friday, the mass known as the Great Pacific Garbage Patch is about 1.6 million square kilometers in size – up to 16 times bigger than previous estimates. That makes it more than double the size of Texas.” CNN – March 23, 2018.

Of all the fabricated narratives about the environment, this one takes the cake. Yes, there is plastic in the oceans, mostly discarded fishing gear, but there is no island of plastic waste twice the size of Texas in the middle of the Pacific Ocean. Because the average person cannot see the middle of the Pacific for themselves sensationalist activists, media, and politicians just make this up. In fact, plastic in the oceans is doing far more good than harm. Allow me to explain this bold assertion.

Plastic is made from several raw materials including oil, coal, natural gas, and wood. Plastics are polymers — long-chain compounds often composed of identical molecules. Think of a string of pearls. Nearly all plastics originate from living matter formed with solar energy by photosynthesis in plants on land and sea. For example, rayon and cellophane are made from cellulose which is a polymer of glucose derived from wood and are therefore plastics. Cotton is pure cellulose and is therefore also a plastic. Natural rubber and synthetic rubber are polymers and therefore plastics. Oil, coal, and natural gas are all products of solar energy that produced forests and sea life that turned into fossil fuels over the millennia. Today they are made into polymers such as polyethylene, polypropylene, and polyvinyl chloride, otherwise known as PVC or vinyl.

To begin, despite the vast amount of propaganda, plastics are not toxic, they are inert. This is one of the reasons we package and wrap much of our food in plastic. It helps prevent spoilage from bacteria and mold, and protects the food from contamination by actual toxic substances. If plastic were toxic, we would not wrap our food in it. Plastic does not miraculously become toxic in the ocean.

There is a big difference between pollution and litter. Pollution is either a toxic substance or one that is harmful to life in other ways. Plastic litter may appear unsightly, but like driftwood on a beach it is not toxic and does not harm life. Like driftwood in the ocean, plastic promotes life, as many marine species attach themselves to it, lay their eggs on it, or eat other species that are living on it. Floating pieces of plastic are like small floating reefs that enhance rather that harm marine life. Many plastic objects are in the form of containers, so unlike most driftwood can be used as shelter from predators and habitat for breeding. 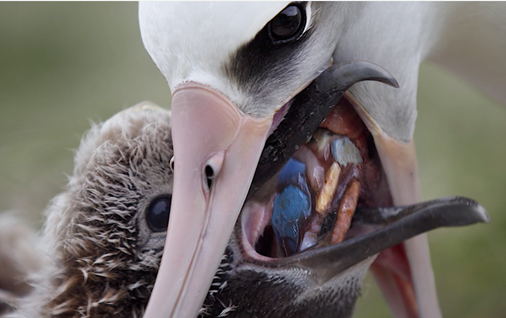 A parent albatross giving its chick bits of plastic as an aide to digestion in the gizzard. Photo from: https://vimeo.com/264508490

Perhaps the most unique benefit of floating bits of plastic in the sea is their use by seabirds as an alternative for the traditional items used as digestive aids in their gizzards. Birds have no teeth, so they swallow their food whole. All birds have two stomachs, one like ours and another that is a muscular organ, the gizzard, used to grind large hard pieces of food so they can be digested. To aid in this process birds on the land use pebbles fed to them by their parents from birth and then they gather pebbles for themselves all their lives. There are no pebbles in the ocean, so seabirds use floating bits of pumice from undersea volcanoes, bits of hard wood, floating nuts from trees, and since plastic was introduced to the oceans about 60 years ago, suitable bits of floating plastic. Many studies by bird specialists have found that this has no negative effects on chicks or adults. Yet Sir David Attenborough, The Smithsonian, and Greenpeace falsely allege that the parent birds are “feeding” plastic to their chicks “mistaking it for food” and that this is killing their chicks. They know what a bird gizzard is, but they never use that word. They know they are lying for the sake of notoriety and donations.

It would be beneficial to sea life if the environmental community and the international fishing industry would work to develop a program to prevent damaged fishnets being thrown in the ocean. Discarded fishnets can catch fish and other sea life and are nicknamed “ghost nets”. It should be possible to incentivize fishers to bring their damaged nets to the dock where they can be recycled or disposed of in manner that does no harm.

Dr. Patrick Moore, PhD in Ecology and co-founder of Greenpeace is the author of the recently published Fake Invisible Catastrophes and Threats of Doom. Dr. Moore is a Director of the CO2 Coalition based in Arlington, Virginia.

This commentary was first published by BizPacReview , November 15, 2021.