Bloomin’ Algae! How paleogeography and algal blooms may have significantly impacted deposition and preservation of the Marcellus Shale

Introduction
The Marcellus Shale of the Appalachian Basin has been characterized as having geologically favorable rock properties, including high total organic carbon, high porosity and high permeability. These properties are linked directly with the large natural gas reserve projections for individual wells and for the Marcellus play as a whole. The superior rock properties may be explained by the depositional framework of the Marcellus and the significant role that algal blooms may have played in the development of this resource. The Marcellus depositional system likely occurred in a “Perfect Storm” for organic mud creation, preservation and lack of dilution into a nearly enclosed depositional basin. Algal blooms in the Middle Devonian Marcellus Depositional Basin are proposed to have played a key role in the creation, accumulation and preservation of the Marcellus Shale. Algal blooms are suggested to have greatly increased the production of organics and also enhanced preservation by creation of possible basin-wide anoxia. This important role of algal blooms is likely to be applicable to many of the other Shale plays around the world.

Paleogeography
During the Middle Devonian, the central Appalachian Basin was located between 15o and 30o south latitude (Ettensohn 1992). Paleogeographic reconstruction by Ettensohn (1985b), Woodrow and Sevon (1985) and Blakey (2005) show that the organic-rich deposition occurred in a large, nearly enclosed sea (Marcellus Basin). The Acadian Highlands bounded the Marcellus Basin to the east and were proposed to have been quite significant, as Bradley (1982) estimated that they may have attained a height of at least 4 km. Ettensohn (1985b) placed the Basin in the path of southeasterly trade winds which would have brought moisture westward from the Iapetus Ocean.

Ettensohn (1985b) proposed that the Acadian Highlands would have created a rain shadow with likely arid conditions on the west flank of the Highlands. These arid conditions would have been a major factor in the quality of the organics deposited, as dilution of the organics by non-aeolian silici-clastics would have been minimized. The arid conditions and prevailing trade winds introduced aeolian siliciclastics into the basin from the landmass east of the Marcellus depositional basin. Werne et al (2002) reported the presence and enrichment of eolian silt grains in the organic-rich facies of the Oatka Creek in western New York and directly related this to a decrease in carbonate and non-eolian siliciclastic sediments. In addition, Sageman (2003) reported a direct relationship between increasing eolian silts and increasing total organic carbon.

Like other organic-rich shales, the creation, deposition and preservation of the organic Marcellus sediments were controlled by three factors (Sageman 2003): 1) primary photosynthetic production, 2) bacterial decomposition, and 3) bulk sedimentation rate. It is proposed that the Marcellus organic-rich units were deposited and accumulated in a “Perfect Storm” scenario of maximum organic production, maximum preservation, and minimum non-aeolian sediment influx. Subtropical warmth and increased solar radiation due to the basin’s paleogeographic location in the sub-tropics would have enhanced the growth of the marine phytoplankton, which was the dominant contributor to organic material in the organic-rich facies. Paleogeographic reconstruction by Ettensohn (1985b), Woodrow and Sevon (1985) and Blakey (2005) show that the organic-rich deposition occurred in a large, nearly enclosed sea. Figure 1 depicts the paleogeographic reconstruction by Blakey (2005) of the Appalachian area during the Middle Devonian at about 385 Ma. The arid conditions that were likely present during deposition of the organic facies led to probable non-aeolian sediment starvation, as evidenced by the decrease in non-eolian siliciclastic deposition in the organic-rich facies, preventing dilution of the accumulating organic material. 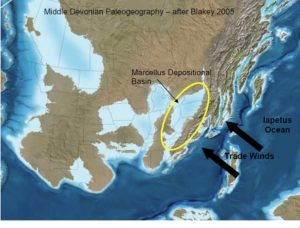 The Role of Algal Blooms in Marcellus Deposition/Preservation
Algal blooms in the Middle Devonian Marcellus Depositional Basin are proposed to have played a key role in the creation, accumulation and preservation of the Marcellus Shale. Phytoplankton would have been continuously present in the Marcellus Sea, but would have experienced dramatic population growth or “blooms” due to an influx of nutrients into the system. This sudden increase in the phytoplankton population would have greatly enhanced the amount of organic material available for deposition and accumulation. Associated with modern blooms are widespread anoxia events which may have occurred as basin-wide events during the Marcellus deposition, leading to enhanced preservation of the organics.

Associated with modern algal blooms are large anoxic “dead zones” that are created when an explosion in the algae population occurs. The algae quickly consume all of the available nutrients and die off simultaneously. This mass die-off then stimulates a bacterial process that breaks down the dead algae, using an immense amount of oxygen. This anoxic process creates a “dead zone” that proceeds to kill off and make uninhabitable the area surrounding the “bloom”. In addition, some species of algae produce neurotoxins which have severe biological impacts on the marine organisms of the area. Modern dead zones can exceed 1,600 square km (1,000 square miles) in areal extent.

It is proposed that large scale dust storms occurred in the Marcellus Basin which triggered widespread algal blooms and produced basin-wide anoxic events. Adams, et al (2010) report on a biogeochemical cascade during the Cretaceous that triggered widespread ocean anoxia and may provide a model for the suggested Marcellus basin-wide anoxia. The Cretaceous event was triggered by an influx of nutrients into the sea through an increase of volcanic derived sulphate. This Cretaceous anoxic event lasted less than 1 million years and may have ended with reduction of sulphate levels by mineralization of the sulphur mineral pyrite.

Since the Marcellus depositional basin was nearly land locked, with only a narrow opening to the south, repopulation of the now dead Marcellus Sea would only have occurred over a very long time frame. Phytoplankton growth within the Basin would have continued, with enhanced preservation of the organics due to lack of a developed marine eco-system. Preservation of the organics may also have been aided by the likely presence of a shallow wave base related to the enclosed basin setting, rather than a much deeper wave base in a setting of an open marine environment.

It is clear from the presence of aeolian silt grains in the western New York area that large dust storms must have been a somewhat regular feature, arising from the arid areas east and southeast of the Marcellus Basin. These dust storms may have been the result of large, basin-wide storms or possibly from Chinook-like winds racing westward down the west flanks of the Acadian Mountain Range (Patterson, 2009). The dust that was blown into the Marcellus Basin was likely derived from the Middle Devonian soils that would have contained naturally occurring nitrates, sulphates and iron which, when introduced into this sub-tropical basin, would have caused algal blooms to form. Mintz, et al (2010) report that soils in the area surrounding the Appalachian Basin were well developed during deposition of the Middle Devonian Mahantango Formation, which is located stratigraphically immediately above the Marcellus Shale.

Localized algal blooms may also explain why organic rock quality varies across relatively small areas of the basin and also why some larger regions have superior productive capabilities. Boyce and Carr (2010) presented evidence of significant local variations in thickness and TOC. It is possible that localized Chinook winds were focused by topography into certain geographic areas of the basin, which led to enhanced localized organic production, preservation and reservoir potential. 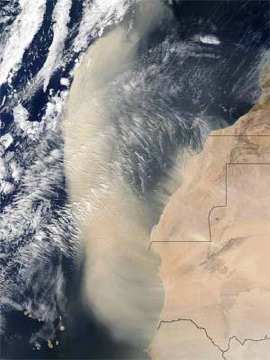 Recent dust storms may serve as an analog to the proposed ancient algal bloom triggering events. In September of 2009, eastern Australia experienced its biggest dust storm in 70 years, with a plume of dust 1,500 km long and 400 km wide. The dust originated primarily from the arid central Australian Lake Eyre Basin, an area used primarily for sparse grazing and little agriculture. This Australian dust storm deposited millions of tons of iron-rich red soil in the Tasman Sea east of Sydney and resulted in a giant algal bloom and associated “dead zone” in the Tasman Sea between Australia and New Zealand. Algal blooms also occur regularly in the eastern Atlantic Ocean due to large influx of nutrients from dust storms that are sourced from the Sahara desert (Figure 2).

Summary
The excellent rock properties of high TOC, porosity and permeability found in the Marcellus Shale are likely related in large measure to the depositional processes in place during the Middle Devonian. These controls on the depositional processes include paleogeography, nutrient sourcing of algal blooms by frequent dust storms, and preservation of the organics by basin-wide bloom related anoxic events.