Summary by Gregory Wrightstone and C. A. “Kees” de Lange

Nitrous oxide (N20) has now joined carbon dioxide (CO2) and methane (CH4) in the climate alarm proponents’ pantheon of anthropogenic “demon” gases. In their view, increasing concentrations of these molecules are leading to unusual and unprecedented warming and will, in turn, lead to catastrophic consequences for both our ecosystems and humanity.

Countries around the world are in the process of greatly reducing or eliminating the use of nitrogen fertilizers based on heretofore poorly understood properties of nitrous oxide. Reductions of N2O emissions are being proposed in Canada by 40 to 45 percent and in the Netherlands by up to 50 percent. Sri Lanka’s complete ban on fertilizer in 2021 led to the total collapse of their primarily agricultural economy.

To provide critically needed information on N2O, the CO2 Coalition has published an important and timely paper evaluating the warming effect of the gas and its role in the nitrogen cycle. Armed with this vital information, policymakers can now proceed to make informed decisions about the costs and benefits of mandated reductions of this beneficial molecule.

Key takeaways from the paper:

N2O and its warming potential

The first portion of the paper is highly technical and reviews the greenhouse warming potential of N2O. Like CO2, nitrous oxide is a linear, chemically inert molecule that absorbs infrared radiation. However, N2O has a longer lifetime in the atmosphere than CH4 because it is more resistant to chemical or physical breakdown. Increasing atmospheric concentrations of N2O likely contribute some amount of warming to the Earth’s atmosphere. To assess how much is likely, the authors consider well-validated radiation transfer theory and available experimental evidence rather than very complex general circulation climate models, which have proven unreliable.

The current N2O concentration at sea level is 0.34 parts per million (ppm) and increasing at a rate of about 0.00085 ppm/year. This rate of increase has been steady since 1985 with no indication of acceleration. A comparison with CO2, at a present concentration of approximately 420 ppm, is in order. For current concentrations of greenhouse gases, the radiative forcing per added N2O molecule, is about 230 times larger than the forcing per added CO2 molecule. This sounds bad, but what are the facts?

The rate of increase of CO2 molecules is approximately 2.5 ppm/year, or about 3,000 times larger than the rate of increase of N2O molecules. So, the contribution of nitrous oxide to the annual increase in forcing is 230/3,000 or about 1/13 that of CO2. If the main greenhouse gases CO2, CH4 and N2O have contributed about 0.1 C/decade of the warming of the Earth observed over the past few decades, this would correspond to about 0.00064 degrees Celsius per year or 0.064oC per century of warming from N2O, an amount that is barely observable. At the present rate of increase, a doubling of the N2O concentration would take more than four centuries and, according to Figure 5 of the paper, the increase in warming would be imperceptibly small.

Along with water and carbon, nitrogen is of key importance to plant life and the right proportion of it is critical for optimal growth. Carbon is available to plants from CO2 in the atmosphere; nitrogen must be made available in the soil. To this end various microorganisms and plant species, with the aid of symbiotic microorganisms, fix diatomic nitrogen (N2) from the atmosphere into the soil, where it enters complicated cycles of nitrogen-containing compounds that can move more or less freely in soil and serve many plants. Through the activity of microorganisms (recent work shows that archaea are of comparable importance to bacteria) the nitrogen cycle ends by releasing N2, and to a much lesser extent N2O, back into the atmosphere. Because of losses to the atmosphere and leaching to waterways, soil nitrogen needs to be replenished continuously to optimize plant growth. 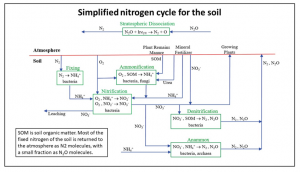 Agricultural and natural vegetative growth contribute comparable amounts to the nitrogen cycle. Optimum crop growth requires large amounts of nitrogen. Some nitrogen is provided by animal manure and decaying plants. However, these sources of nitrogen are insufficient for the needs of agriculture to feed a growing world population. 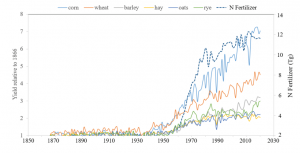 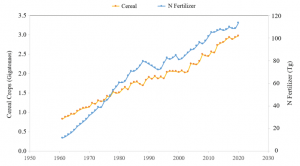 Feeding a world population that is growing at a rate of 1.1 percent per year is no trivial matter. Devastating famines from the past have been kept at bay during the last century by the fundamental scientific developments noted above. At the moment many governments, under the influence of ‘’green’’ pressure groups, exhibit a dangerous inclination to limit the use of nitrogen fertilizers to move farmers ‘’back to nature’’ in order to save the world from “climate disaster.” In the Netherlands, the government is considering forcing large numbers of farmers out of business to supposedly prevent catastrophic warming from N2O emissions. As this new paper shows, N2O emissions will have a trivial effect on temperature increases. Farmers themselves, not government bureaucrats, should determine the optimum amounts of nitrogen fertilizer to maximize crop yields.

Agriculture free of artificial fertilizers, despite it being highly labor-intensive and producing very low yields, may be feasible for a small niche of the world population willing and able to pay for it. However, it is inconceivable that the growing masses , or even the current world population, can be fed without the intelligent, science-based use of nitrogen and other fertilizers. 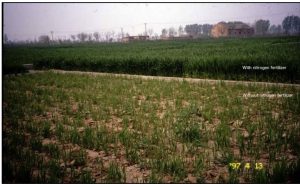 Wheat with and without nitrogen fertilizer – Deli Chen – University of Melbourne

Read Now
A team of experts assembled by the CO2 Coalition has completed a detailed examination of effects (or non-effects) of climate change in the Commonwealth of Virginia. View the entire document here (pdf) Virginia and Climate Change. Conclusion This detailed analysis of climate change and its alleged impact on Virginia finds the following to be true… Continue Reading