“Perhaps the powers that be should read a recent analysis by David Stevenson, director of the Delaware-based Caesar Rodney Institute’s Center for Energy & Environment: An increased use of wind and solar energy — the climate alarmists’ preferred alternatives to fossil fuels — failed to reduce emissions of carbon dioxide in the PJM Interconnection service area between 2019-21 despite adding $1 billion a year to power costs as a result of subsidies and taxes, according to Mr. Stevenson. … Combined wind and solar generation in PJM grew about 30 percent over 2019-21, but still only equaled about 4 percent of total production despite more than a decade of mandates and subsidies, said Stevenson. So, pouring money into wind and solar have accomplished little more than the transfer of wealth from taxpayers and consumers to the climate industrial complex.” 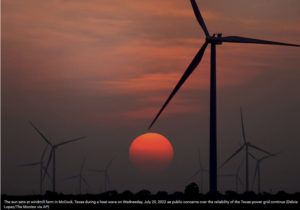