Reconstructing Historical Precipitation in the Amazon Basin Since 1786

<![CDATA[<b>Paper Reviewed Granato-Souza, D., Stahle, D.W., Barbosa, A.C., Feng, S., Torbenson, M.C.A., de Assis Pereira, G., Schongart, J., Barbosa, J.P. and Griffin, D. 2019. Tree rings and rainfall in the equatorial Amazon. Climate Dynamics 52: 1857-1869. Introducing their work, Granato-Souza et al. (2019) note that “only eight instrumental rainfall records longer than 80 years with less than 10% missing values are available for the entire [Amazon] basin, an area nearly the size of the coterminous US.” Therefore they write there is a great need to develop high-resolution precipitation proxies that extend beyond the instrumental record so as to properly evaluate “[instrumental-era] moisture extremes in the context of natural climatic variability during the late Holocene.” And in this regard, they developed what they describe as “the first exactly dated and well-replicated ring-width chronology in the eastern equatorial Amazon basin of Brazil” in order to estimate precipitation variability in this region since 1786. The resultant proxy for wet season (February through November) precipitation is shown in Figure 1 below. It was derived from Spanish cedar (Cedrela odorata) trees native to the region using standard dendrochronological methods and covers the years 1786 to 2016. Examination of the precipitation record reveals, in the words of the authors, that it is “dominated by interannual and subdecadal variability, not unlike the instrumental precipitation totals for the eastern Amazon study area.” Focusing on such variability captured in the reconstruction, Granato-Souza et al. note the existence of two extended wet episodes, a mid-twentieth century period from 1942-1956 and an earlier late nineteenth century period between 1882 and 1903, and one exceptional extended dry episode that occurred during the years 1864 and 1881. The significance of the new Amazon basin rainfall proxy is that there is nothing unusual, unnatural or unprecedented about the record, especially during the most recent decades when climate alarmists have been quick to attribute droughts in this region to be of anthropogenic (i.e., CO2-induced) origin. A longer-term perspective of the moisture regime clearly indicates there is no compelling support for that contention given that both wet and dry periods of greater duration and magnitude have naturally occurred throughout the record despite atmospheric CO2 concentrations being much lower than they are today. 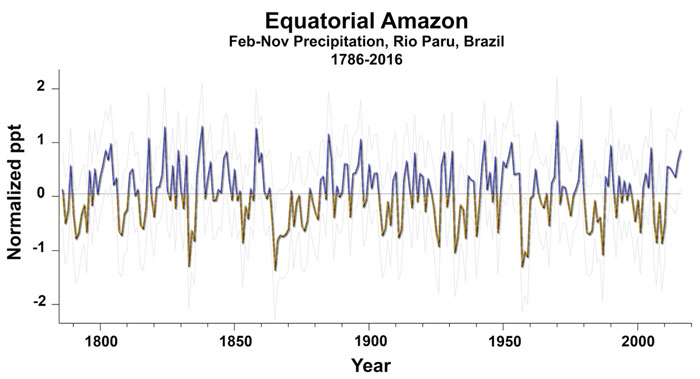