2 respiration of the organisms that live in and on the ocean floor. To help predict the changing contribution of this respiration to the carbon cycle in a warming world, researchers from the Royal Netherlands Institute of Sea Research (NIOZ) and universities in Taiwan have compiled the largest open-access database available of the sediment community oxygen consumption and CO2 respiration. Their findings are published in Nature Scientific Data. The oceans play an important role in the global carbon cycle, with nearly 98 percent of the CO2 being dissolved in seawater. Also, the burial of carbon at the seafloor is an important component of the global carbon cycle. “This large database is valuable. In-depth knowledge of the processes involved and the rates helps other scientists predict future scenarios for ongoing changes in climate and the oceans,” says Professor Gert-Jan Reichart of NIOZ and the University of Utrecht, and coordinator of a multi-stakeholder CO2-to-Ocean research coalition about the publication, in which he did not take part. CO2 respiration by seafloor dwelling organisms Sediments at the bottom of the ocean host organisms such as algae that produce organic matter, but sediments also receive organic material formed by phytoplankton at the surface ocean that sinks to the seafloor. Part of the organic material is buried and functions as a carbon sink over geological time scales, sequestering carbon for millions of years. However, most of the organic carbon is respired again as CO2 by microorganisms and animals that live in the top 10 to 50 cm of the sediment. The sediment community oxygen consumption (SCOC)—or, to put it differently, the CO2 respiration of organisms living in and on the seafloor—is considered a good proxy to understand the degradation of organic matter and to measure the flux of organic matter to the seafloor. These rates will likely be affected by climate change, and to predict their contribution to the carbon cycle in a warmer world, a sound understanding of the rates under the current climate regime is necessary. Therefore, the authors compiled the largest open-access database of SCOC to date, with more than 3,500 data entries from the literature and from measurements performed by the authors themselves on sea expeditions. 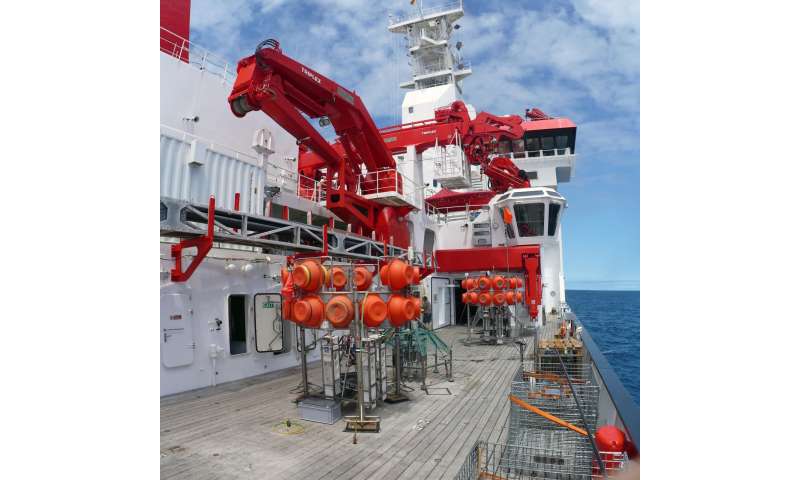 Benthic landers on board RV Sonne; landers belong to Max Planck Institute for Marine Research, Germany, and IRIS, Norway.
Credit: Dr Johannes Lemburg, Alfred Wegener Institute
Southern hemisphere still undersampled This database shows that most of the measurements were performed in the northern parts of the Pacific and Atlantic Ocean and the Arctic Ocean. The southern hemisphere, in contrast, is undersampled, and researchers know almost nothing about the respiration of sedimentary organisms in the Indian Ocean. Besides reporting actual SCOC values, this database can therefore also be used to plan future sampling campaigns to fill blank spots on the map and improve the understanding of carbon cycling in these areas. The 3,500 data entries constituting the database were based on sampling stations around the globe, but predominantly across the Northern hemisphere.   This article appeared on the Phys.org website at https://phys.org/news/2019-10-largest-ocean-floor-key-global.html]]>