How Much Fossil Fuel Is Left?

“Humanity can adapt to whatever climate change may occur—with sufficient prosperity and political will.” – Edward Ring, senior fellow of the Center for American Greatness

“The argument against fossil fuels rests on two premises. The first is that carbon dioxide emissions from burning fossil fuels are causing a climate emergency. … The other premise underlying the drive to eliminate fossil fuels is more pragmatic. We are reaching ‘peak oil,’ and there simply isn’t enough of it to last much longer. Oil, natural gas, and coal are all nonrenewable resources, with finite reserves.”

“According to the most authoritative source on energy in the world, total proven reserves of fossil fuel currently total 49,023 exajoules. This means that just with proven reserves, and if only fossil fuel were used, and if global energy consumption were doubled to 1,000 exajoules per year, there would still be a 50-year supply of energy. How much more fossil fuel can be extracted from unproven reserves is anybody’s guess, but it is a safe bet that twice as much more is available, meaning there’s at least another century’s worth of fossil fuel even if we used nothing else to power civilization.” 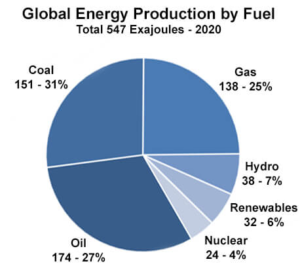