“Notably, the United States has a vested interest in Australia maintaining a steady flow of energy exports because Australia is a critical ally in managing East Asian relations. While this is most often thought of in terms of security cooperation, there is also an economic dimension. The two work very closely on regional maritime security and commercial stability. The risk of regional economic disruption as a result of Australia’s domestic energy issues would create a host of economic problems for East Asian countries that would bring on a new set of security challenges, directly or indirectly, to the U.S. and its allies at a time when Washington already has its hands full dealing with Europe, Russia and China.” 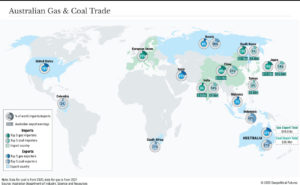