From The New American‘s Alex Newman:

Advocates for draconian controls over people under the guise of stopping alleged man-made global warming are also working to silence scientists who reject their hypotheses surrounding CO2 and climate change, warned CO2 Coalition Executive Director Gregory Wrightstone in an interview on Conversations That Matter with The New American magazine’s Alex Newman. Wrightstone, a geologist who has been censored by Big Tech himself, also sounded the alarm about the devastating effects that “climate” policies would have on humanity—and especially the poor. According to the scientist and members of his organization, which includes very prominent and highly credentialed experts such as Trump climate advisor Dr. William Happer of Princeton, CO2 is actually causing many beneficial effects for the planet. He also said that the geologic record shows CO2 concentrations have been drastically higher in the past. 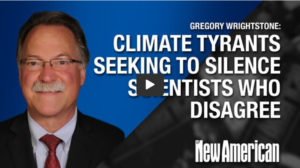