Writing as background for their study, Jacotot et al. (2018) say that “future climate change could affect the functioning of mangrove ecosystems, such as their productivity and carbon sequestration capacities, or even their ability to conquer new available spaces.” Thus, it was their objective to examine the interactive effects of elevated CO2 and increased tidal flooding on two mangrove species, Avicennia marina and Rhizophora stylosa.

Their experiment was conducted in controlled-environment greenhouses in the city of Mont-Dore in New Caledonia from June 2016 through May 2017. Two-year-old seedlings of the two mangrove species were grown in the greenhouses under ambient (400 ppm) or elevated (800 ppm) CO2, with the elevated CO2 being supplied during 0500 to 1900 hours each day. In addition, the plants were subjected to normal (3.25 hours for A. marina and 6.0 hours for R. stylosa) or increased (an extra 1.75 hours) tidal flooding durations to simulate what the authors describe as “realistic” durations of tidal flooding under expected end-of-the-century sea level rise projections.

The findings of the analysis can be summed up in three of the Result section headings of their paper: (1) “Elevated atmospheric CO2 concentrations will increase mangrove net productivity,” (2) “Increase in temperature will raise the beneficial effect of elevated CO2,” and (3) “Elevated CO2 will help mangrove trees to resist drought.”

With respect to their reporting that warming temperatures will enhance the beneficial effects of CO2 enrichment of the two mangrove species, Jacotot et al. write that the positive effects on photosynthesis were “more pronounced during the warm season, suggesting that an increase in global temperatures would further enhance the photosynthetic response of the considered species,” noting that there was “a clear difference in the photosynthetic response to elevated CO2 between the cool season and the warm season, which increased from 32 to 40% and from 38 to 45% for A. marina and R. stylosa, respectively.”

Lastly, the authors report that the increase in tidal flooding duration had no statistically significant impact on net photosynthesis for either mangrove species under ambient CO2 and that it had only a very small effect (3-5% decline) under elevated CO2 conditions. Consequently, in light of all of the above, the future looks very promising for the growth and survival of these two mangrove species. 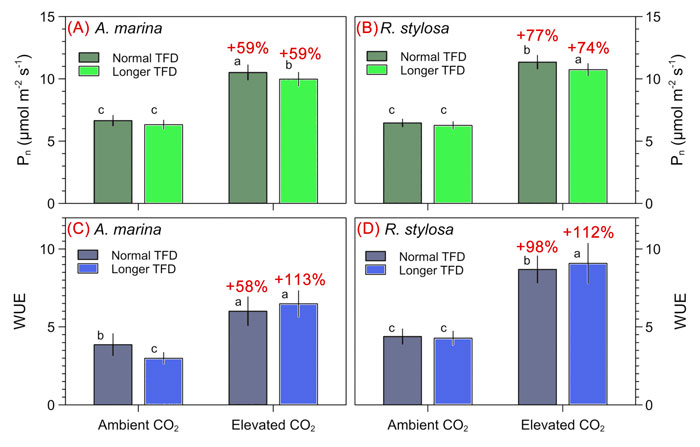 Figure 1. Mean values ± SEM (n = 360) of net photosynthesis (A, B) and water use efficiency (C, D) for A. marina and R. stylosa grown in ambient (400 ppm) or elevated (800 ppm) CO2 and under normal (dark green or blue) and longer (light green or blue) tidal flooding durations for 12 months. Different letters indicate significant differences (p < 0.05) and red percentages indicate the percent change in net photosynthesis (Pn) or water use efficiency (WUE) due to elevated CO2 at a given tidal flooding duration (TFD). Source: Jacotot et al. (2018).

This article appeared on the CO2 Science website at http://www.co2science.org/articles/V23/jan/a7.php

The Photosynthetic Response of Jicama to Elevated CO2

Far above average for total snow mass this year... Read about it here: https://t.co/yi9Jf9cPXe https://t.co/JfJLOkfPVA

While we didn't file the petition, we are happy that Coalition member @co2science did through his organization: Cen… https://t.co/dGIeFFWjk3

@JunkScience @realDonaldTrump We weren't the ones to file the petition. Craig Idso (@co2science who is a Coalition… https://t.co/Zb2GM7BNib