By Jenna McLaughlin Tue September 4, 2018 Washington (CNN) William Happer, a Princeton atomic physicist and prominent skeptic questioning whether humans are causing rapid climate change, is joining the National Security Council as senior director for emerging technologies, according to NSC officials. Happer, 79, is an emeritus professor of physics at Princeton who served in the Department of Energy under President George H.W. Bush in the early 1990s. He did not respond to CNN’s requests for comment. His public stance on climate change is in opposition to near universally accepted science. He told CNN in April 2017 that carbon dioxide is not the toxic “pollutant” it’s made out to be and “the temperature is not rising nearly as fast as the alarmist computer models predicted.” He compared the Paris climate agreement, signed in 2015 by the US under President Barack Obama and 194 nations, to British Prime Minister Neville Chamberlain’s appeasement of Hitler in the 1930s and said it was “silly” and “should be canceled.” […] CNN

According to her LinkedIn page, Jenna McLaughlin has a BA in Writing Seminars from Johns Hopkins University.  She started her extensive journalism career with Mother Jones in 2014.  She is currently a National Security Reporter with CNN. What in the Wide, Wide World of Sports does Dr. Happer’s views on climate change have to do with his joining the National Security Council as senior director for emerging technologies? On what basis can a 20-something person with a BA in Writing Seminars assert that Dr. Happer’s “public stance on climate change is in opposition to near universally accepted science”?  Recent surveys of the American Meteorological Society indicate that 1/3 to 1/2 of atmospheric scientists’ views “on climate change” are also “in opposition to near universally accepted science”… Maybe they didn’t cover the definition of “universal” in her Writing Seminars. The really galling (or hilarious) thing is that the CNN URL for the article calls Dr. Happer a “climate denier”… https://www.cnn.com/2018/09/04/politics/happer-climate-denier-trump-adviser/index.html Maybe CNN didn’t read their own article…

Happer has said he is not a “climate denier.” He told Foreign Policy magazine in May 2017 that “climate has been with us forever” and it’s ridiculous to “deny” it.

Ms. McLaughlin worked for Foreign Policy magazine in between here Mother Jones and CNN gigs. The only deniers here are the clowns at CNN…

He told CNN in April 2017 that carbon dioxide is not the toxic “pollutant” it’s made out to be and “the temperature is not rising nearly as fast as the alarmist computer models predicted.”

(Some of the following was copied from my previous rebuttal of a Climatariat News Network article.) Thirty years ago, NASA climatariat “scientist” James Hansen disproved catastrophic anthropogenic global warming (AKA Gorebal Warming)…

Hansen’s spectacular disproving of Gorebal Warming is even more apparent in his 5-year average temperature plot:

Bear in mind.  I’m using Hansen’s own temperature data, despite his penchant for influencing “the nature of the measurements obtained, so that key information can be obtained”…

What’s that?  The models have improved since 1988?  “Improved” is a relative term. Here  are the RSS satellite temperature data and a suite of climate models: 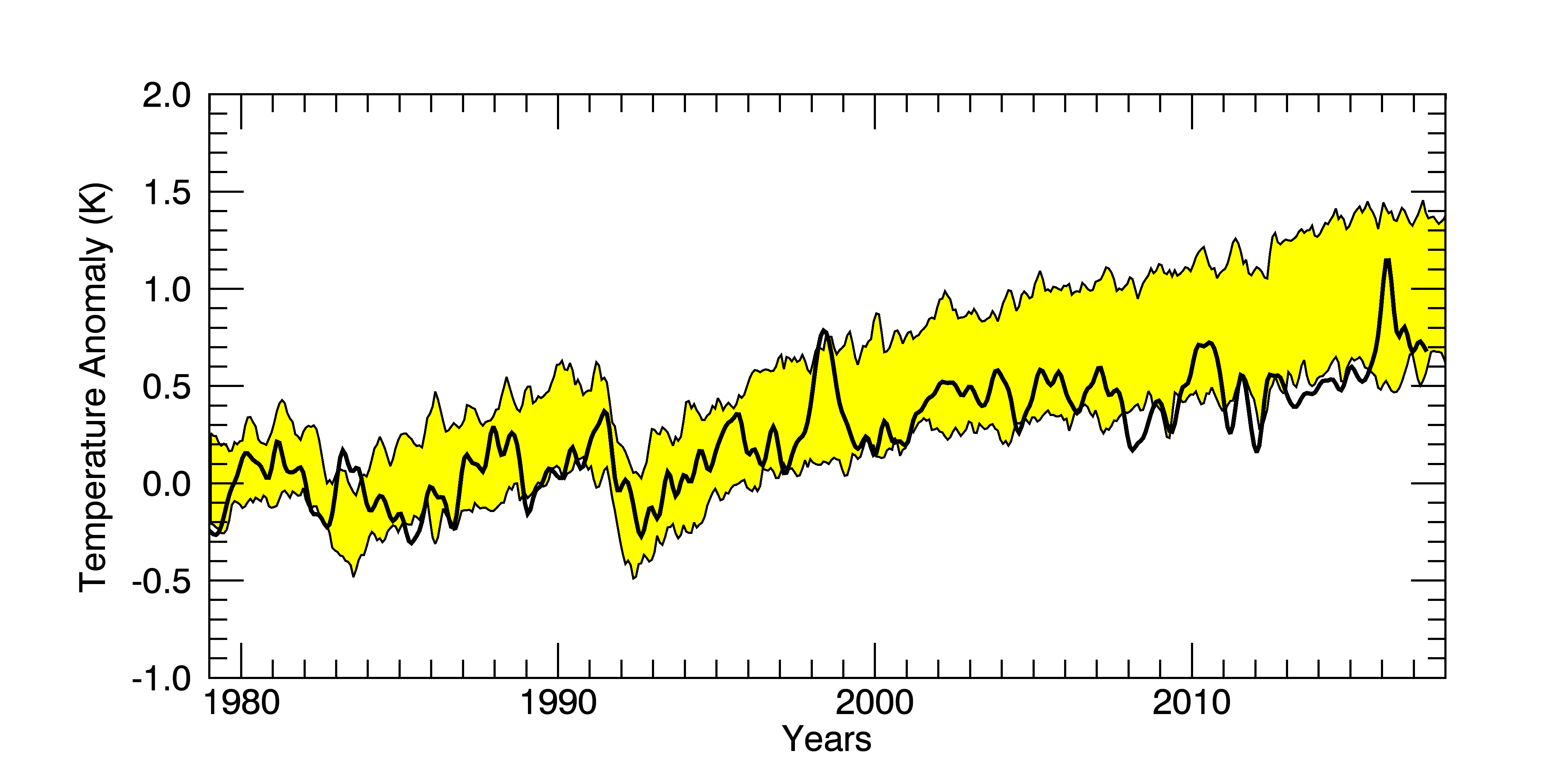 “Fig. 1.  Global (70S to 80N) Mean TLT Anomaly plotted as a function of time.  The black line is the time series for the  RSS V4.0 MSU/AMSU atmosperhic temperature dataset.  The yellow band is the 5% to 95% range of output from CMIP-5 climate simulations.  The mean value of each time series average from 1979-1984 is set to zero so the changes over time can be more easily seen.  Note that after 1998, the observations are likely to be in the lower part of the model distribution, indicating that there is a small discrepancy between the model predictions and the satelllite observations.(All time series have been smoothed to remove variabilty on time scales shorter than 6 months.)” Remote Sensing Systems

95% of the model runs predicted more warming than the RSS data since 1988… And this is the Mears-ized RSS data, the one in which the measurements were influenced to obtain key information (erase the pause and more closely match the surface data). Describing this as “a small discrepancy” would be like CNN calling this “near universally accepted science”…

The observed warming has been less than that expected in a strong mitigation scenario (RCP4.5).

Output of 38 RCP4.5 models vs observations.   The graph is originally from Carbon Brief.  I updated it with HadCRUT4 to demonstrate the post-El Niño divergence.

RCP4.5 is a strong mitigation scenario with the atmospheric CO2 concentration leveling off below 540 ppm in the second half of the 21st century.

RCP 4.5: The RCP 4.5 is developed by the MiniCAM modeling team at the Pacific Northwest National Laboratory’s Joint Global Change Research Institute (JGCRI). It is a stabilization scenario where total radiative forcing is stabilized before 2100 by employment of a range of technologies and strategies for reducing greenhouse gas emissions. The scenario drivers and technology options are detailed in Clarke et al. (2007). Additional detail on the simulation of land use and terrestrial carbon emissions is given by Wise et al (2009). The MiniCAM-team responsible for developing the RCP 4.5 are: Allison Thomson, Katherine Calvin, Steve Smith, Page Kyle, April Volke, Pralit Patel, Sabrina Delgado, Ben Bond-Lamberty, Marshall Wise, Leon Clarke and Jae Edmonds RCP Database

The observed warming has consistently tracked strong mitigation scenarios, despite the fact that very little mitigation has occurred.  This is a pretty strong indication that the climate is relatively insensitive to a doubling of atmospheric CO2 concentration… Whereas hammers and feathers are equally sensitive to the force of gravity.   This article appeared on the WattsUpWithThat? website at https://wattsupwiththat.com/2018/09/06/william-happer-joining-trump-national-security-council-cnn-report-happer-climate-denier-trump-adviser/]]>