at Twitter here tweeted a chart showing that accumulated cyclone energy (ACE) has not risen at all in 30 years, despite earlier massive hype and hollering by climate scientists and media, who insist “man-made” global warming is causing more frequent and intense cyclones.

In fact Klotzbach’s plot above shows that there has even been a modest decline. So I tweeted a question to Dr. Klotzbach, and he was kind to answer as follows: 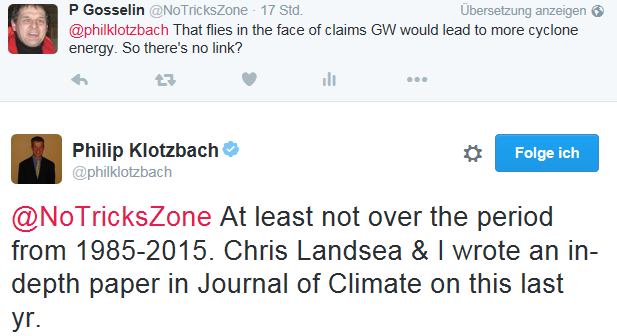 As the reader will note, Klotzbach does not see any link between cyclone activity and global warming over the past 30 years. If we roughly plot CO2 levels vs ACE, no statistical analysis is needed to tell us that there is no correlation, except of course that rising atmospheric CO2 concentration might be causing a little bit less cyclone activity (which is the OPPOSITE of what is claimed by alarmists): 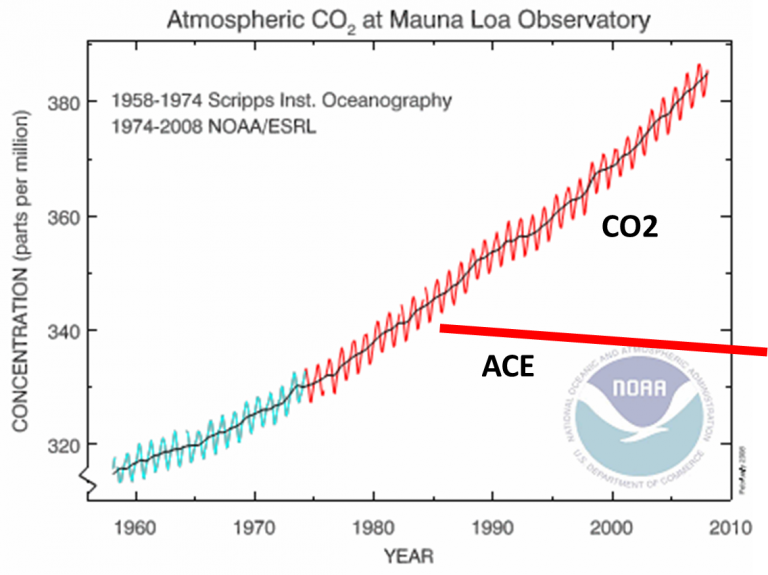 Plot of ACE since 1980 vs atmospheric CO2 concentration. ACE has dropped a bit. CO2 chart from NOAA. Global temperatures have also risen since 1980 (many arguing it has more to do with ocean and solar cycles, and less so with CO2). Yet, here as well a temperature increase over the period has not led to a rising trend in cyclone activity. The paper Dr. Klotzbach refers to can be seen here. He writes in the abstract:

Globally, the year 2015 saw brisk cyclone activity, and thus has caused the trend since 1985 to be less steeply downward.   This article appeared on the NoTricksZone website at http://notrickszone.com/2016/09/20/us-atmospheric-scientist-sees-no-link-between-accumulated-cyclone-energy-and-global-warming-over-past-30-years/]]>