The Relationship Between CO2-induced Plant Growth Stimulation and Nitrogen Acquisition

Paper Reviewed Feng, Z., Rütting, T., Pleijel, H., Wallin, G., Reich, P.B., Kammann, C.I., Newton, P.C.D., Kobayashi, K., Luo, Y. and Uddling, J. 2015. Constraints to nitrogen acquisition of terrestrial plants under elevated CO2. Global Change Biology 21: 3152-3168. In a paper published in the journal Global Change Biology, the ten-member research team of Feng et al. (2015) set out to investigate the relationship between CO2-induced plant growth stimulation and nitrogen acquisition by conducting a meta-analysis of the subject using data from 35 peer-reviewed journal articles. All of the data they utilized were derived from studies using Free-Air CO2 Enrichment (FACE) technology and represented observations obtained from grassland, forest and cropland ecosystems. Results of their analysis revealed that “across all data, elevated CO2 increased aboveground net primary production by 16% and nitrogen acquisition by 8%.” Similar findings were observed when narrowing the data down into a smaller subset of grasslands and forests that had been subjected to CO2 enrichment for a minimum of seven — and maximum of eleven — years. As shown in the figure below, aboveground net primary production remained relatively stable at around 15 percent as the length of experiment years increased. Nitrogen acquisition, on the other hand, increased with time, as did the nitrogen concentration of aboveground annual biomass, which became less negative. And in projecting the slope of the line fit to the nitrogen concentration data forward in time, it can be estimated that within 9 years of additional CO2 enrichment, this parameter will no longer be negative, as it will cross into positive territory at that time. Similarly, if the trend in nitrogen acquisition continues its advancement upward (dashed blue line), it would not be unrealistic to project a future increase in aboveground net primary production, as illustrated in the dashed green line. The significance of the above findings was not lost on the authors of this study, who remark in the discussion section of their paper that “the expectation that the magnitude of positive ecosystem productivity responses to elevated CO2 will decline over time due to [the progressive nitrogen limitation (PNL) hypothesis] was not supported by our analysis of long-term (7-11 years) responses of plant productivity, nitrogen acquisition and nitrogen concentration in FACE experiments.” The PNL hypothesis has long been championed by climate alarmists, who claim that low concentrations of soil nitrogen will curtail the ability of the productivity-enhancing effect of rising atmospheric CO2 concentrations to maintain increased plant growth and ecosystem carbon sequestration rates over the long term. Clearly, however, as illustrated by the data in this study, such limitation is not taking place. 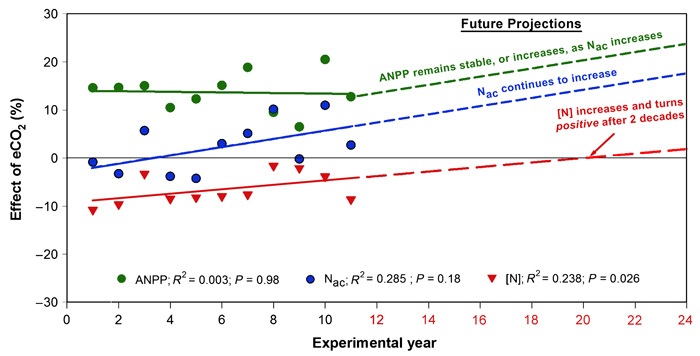