The Positive Response of a Permanent Grassland to Atmospheric CO2 Enrichment

Paper Reviewed Andresen, L.C., Yuan, N., Seibert, R., Moser, G., Kammann, C.I., Luterbacher, J., Erbs, M. and Müller, C. 2018. Biomass in a temperate European grassland through 17 years of elevated CO2. Global Change Biology 24: 3875-3885. Approximately 26% (or 3.5 billion ha) of the planet’s land area is comprised of grasslands. These vast areas provide a range of services, including providing a food source for humans, livestock and wild animals. And because any alteration in grassland productivity (or product quality) has the potential to disrupt such services, grasslands have long been the subject of examination by scientists examining the effects of climate change. One such example is the long-term Giessen Free Air Carbon Dioxide Enrichment Facility that has been operating near Giessen, Germany for nearly two decades. This permanent, nongrazed grassland has been professionally managed for over 100 years, receiving regular fertilizer applications and being mowed twice a year. Beginning in May 1998, however, experimental plots on the site were fumigated with atmospheric CO2 concentrations that were approximately 10% greater than ambient air (364 ppm for ambient air and 399 ppm for enriched air), which percentage enrichment grew over the following years to approximately 30% in 2014 (397 ppm for ambient air and 518 ppm for enriched air). The goal of the scientists managing the site was to examine the long-term effects of elevated CO2 on the grassland species. And what did those effects reveal? As shown in Figure 1, Andresen et al. (2018) report that during the initial few years of the study, the total aboveground biomass (TAB) of the grasslands was very similar under both ambient and elevated CO2 conditions. Then, around 2006, a CO2-induced stimulation became more obvious. Between 2006 and 2014, elevated CO2 increased TAB by an average of 15%, revealing what the authors describe as “a long-term steady biomass increase in this fertile grassland” that is “comparable in magnitude to increases in other grassland FACE studies.” When considering the above results, it is not that surprising that the positive effects of CO2 enrichment on grassland biomass were negligible during the early years when the percentage CO2 increase was only around 10 percent, or 35 ppm. What is surprising is that the approximate 20-30 percent increase in CO2 in the latter years was able to induce aboveground biomass enhancements of 15 percent. If this relationship between elevated CO2 and grassland biomass holds in linear fashion, that would indicate an approximate 45 percent enhancement in TAB by the end of this century if CO2 concentrations reach 700 ppm or higher! And such increases could very well be realistic, especially considering that Andresen et al. note “there was no attenuation in elevated CO2 effects over time.” 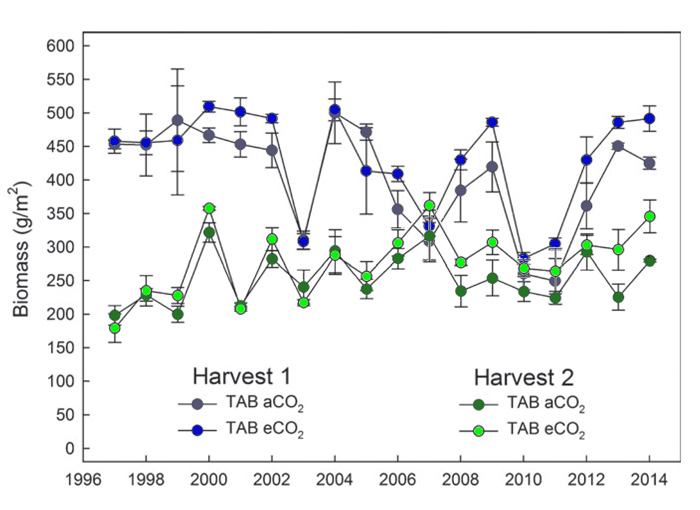