Paper Reviewed O’Sullivan, M.O., Spracklen, D.V., Batterman, S.A., Arnold, S.R., Gloor, M. and Buermann, W. 2019. Have synergies between nitrogen deposition and atmospheric CO2 driven the recent enhancement of the terrestrial carbon sink? Global Biogeochemical Cycles 33: https://doi.org/10.1029/2018GB005922. Net primary production (NPP) represents the net carbon that is fixed (sequestered) by a given plant community or ecosystem and is the combined product of climatic, geochemical, ecological and human effects. In recent years, many have expressed concerns that global terrestrial NPP should be diminishing due to the many real (and imagined) assaults on Earth’s vegetation that have occurred over the past several decades, including wildfires, disease, pest outbreaks, deforestation, and supposedly unprecedented climatic changes in temperature and precipitation. The United Nations’ Intergovernmental Panel on Climate Change, for example, contends that current levels of temperature and changing precipitation patterns (which they believe are mostly driven by the modern rise in atmospheric CO2) are beginning to stress Earth’s natural and agro-ecosystems by reducing plant growth and development. And looking to the future, they claim that unless drastic steps are taken to reduce the ongoing rise in the air’s CO2 content (e.g., scaling back on the use of fossil fuels that, when consumed, produce CO2), the situation will only get worse — that along with reductions in global NPP, crop failures will increase, food shortages will become commonplace and many species of plants (and the animals that depend on them for food) will be driven to extinction. But is this really the case? Is the productivity of the biosphere truly in decline because of global warming/climate change? In a word, no! In fact, observational data indicate that just the opposite is occurring (see, for example, the many studies we have reviewed previously on this topic here). Rather than withering away, biospheric productivity is increasing, thanks in large measure to the growth-enhancing, water-saving and stress-ameliorating benefits of atmospheric CO2 enrichment. The latest study to confirm as much comes from the research team of O’Sullivan et al. (2019). As their contribution to this topic, the six scientists used the Community Land Model version 4.5, which “simulates biophysical, hydrological, and biogeochemical exchange processes between the land and the ocean,” to estimate changes in NPP over the period 1901-2016. Furthermore, their computer analyses provided a quantifying measure of the impact of various drivers on the NPP chances, which drivers included the individual and combined effects of CO2 enrichment, nitrogen deposition and climate. Pertinent findings are presented in Figure 1 and Figure 2 below. As shown in Figure 1, simulated NPP “increased substantially over the 20th century to the present day from 56.2 (mean of 1901-1910) to 66.0 Pg C/year (mean of 2007-2016) with positive contributions from all drivers considered, including rising CO2 concentrations (referred to as CO2 fertilization), nitrogen deposition, climate, and carbon-nitrogen as well as carbon-climate synergies.” Accordingly, the relative contribution of these drivers to the overall NPP increase amounted to 60% for CO2 fertilization, 15% for nitrogen deposition, 8% for climate, 8% from a combined CO2/nitrogen deposition effect, and 9% for a combined CO2/climate effect. Thus the steady rise in atmospheric CO2 was directly or indirectly responsible for 77% of the simulated NPP increase since 1901. A spatial display of the changes in NPP due to atmospheric CO2 enrichment over the period of study is presented in Figure 2. And, O’Sullivan et al. further note that, on the whole, the majority of the earth’s vegetated land surface “increased net carbon uptake over the historical period, with the tropics, East Asia, North America, and northern Eurasia dominating” (authors’ Figure 4f, but not shown here). In considering all of the above, it is clear that fears of a soon-to-be-collapsing terrestrial biosphere are vastly overstated. Rather than declining in vigor, the world’s land vegetation has increased its robustness over the past twelve decades. And the reason for that enhancement, ironically, is the very action climate alarmist claim should be decimating it: humanity’s increasing use of fossil fuels. The combustion of fossil fuels is the principal driver of the contemporary increase witnessed in both atmospheric CO2 and nitrogen deposition. And, if you believe the climate alarmists that rising CO2 is the sole cause of modern warming, well, you can add the positive effects from a warming climate to CO2 and nitrogen deposition as an attributable factor driving the positive trends in NPP. Humanity and nature should therefore be thankful for the use of fossil fuels instead of demonizing it as so many climate alarmists do. They couldn’t be more misguided. 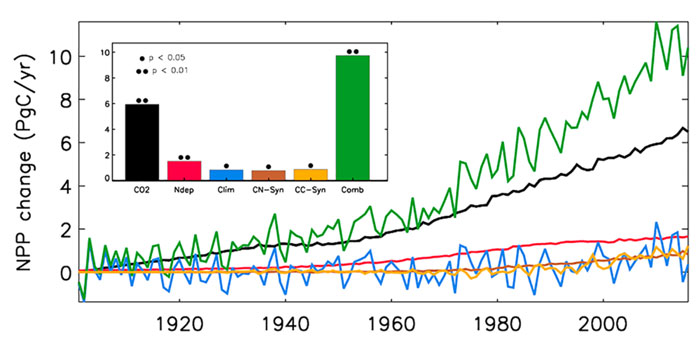 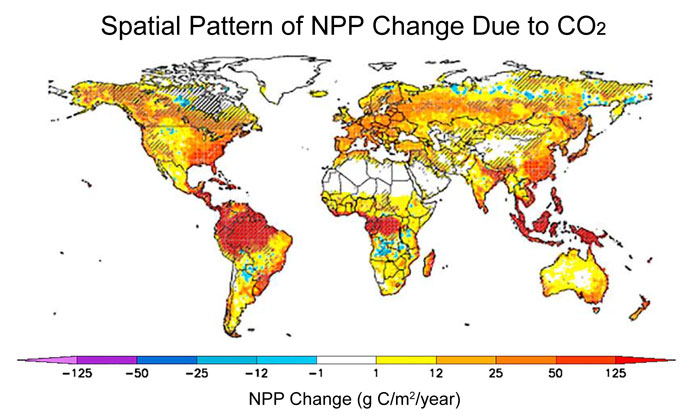