The Effect of CO2 and Temperature on Soybean Seed Nutrition

Paper Reviewed Köhler, I.H., Huber, S.C., Bernacchi, C.J. and Baxter, I.R. 2019. Increased temperatures may safeguard the nutritional quality of crops under future elevated CO2 concentrations. The Plant Journal 97: 872-886. In the words of Köhler et al. (2019), “there is little information about the impact of elevated CO2 in combination with elevated temperature on seed mineral concentrations.” Thus, the four scientists set out “to determine the individual and combined effect of elevated CO2 and elevated temperature on soybean seed composition in terms of storage products (protein and oil) and important minerals.” To accomplish this objective, Köhler et al. subjected soybean (Glycine max, cv. Thorne) plants to either 400 or 600 ppm CO2 and ambient or elevated temperatures that were 2.7/3.4 °C (day/night) warmer than ambient, being warmed by infrared heaters. The experiment was conducted in a Free-Air CO2 Enrichment (FACE) facility (SoyFACE) near Urbana Champaign, Illinois, USA during the 2014 and 2015 growing seasons. And what did the experiment reveal? In terms of seed yield, as shown in Figure 1, elevated CO2 alone boosted this parameter by 12% and 23% in 2014 and 2015, respectively. Temperature stress, in contract, reduced yields in both years by 27% and 36%. However, in the combined elevated CO2 and elevated temperature treatment the yield increases from elevated CO2 offset the yield declines from elevated temperature, fully mitigating the negative effects of temperature stress and returning yield values to that observed under control conditions (ambient CO2 and ambient temperature). Nevertheless, the relative yield increase due to elevated CO2 in the elevated temperature treatments (the dark and light red colored columns in Figure 1) was greater under the temperature stressed conditions than when temperatures were unstressed (the green shaded columns), amounting to a 23% and 33% change in 2014 and 2015. With respect to changes in protein and oil, Köhler et al. report that “there was no significant effect of elevated CO2 on protein or oil,” whereas temperature induced a slight reduction in protein content (less than 2% in 2014 and less than 1% in 2015), but significantly increased soybean seed oil by about 1% in both growing seasons. Changes in seed mineral concentration due to elevated CO2 and temperature were somewhat of a mixed-bag, with some minerals increasing, some decreasing and some remaining unchanged in response to changes in these two parameters. More specifically, Köhler et al. found that out of 20 minerals examined, only six elements were significantly influenced by elevated CO2 (B, Ca, Fe, K, S, Zn). And of those six, only one of them (Fe) had a significant effect in both growing seasons (an 8% decline), whereas all the rest were only significant in one of the two years of study and all experienced slight declines (less than 10%), with the exception of potassium, which increased by 3% (see Figure 2). Elevated temperature, on the other hand, significantly impacted the concentration of 14 of the 20 minerals examined, increasing them in nearly all instances by up to 18% (see Figure 2 for data on 11 mineral elements). Lastly, in the combined elevated CO2 and elevated temperature treatment, it was found that elevated temperature counteracted or restored the reduction of mineral concentrations (where observed) to levels obtained under ambient CO2 and temperature conditions. The above findings bode well for the future from the perspective of plant nutritional quality. First, only one of the 20 mineral elements examined (Fe) showed a negative response to elevated CO2 in both growing seasons. Yet, when combined with an increase in temperature, the CO2-induced decline in Fe concentration was completely offset. Such facts thus led Köhler et al. to conclude that “the potential threat to human nutrition by increasing CO2 concentration [so frequently made by climate alarmists] may not be realized.” What is more, they add that their results “demonstrate the complexity of predicting climate change effects on food and nutritional security when various environmental parameters change in an interactive manner.” 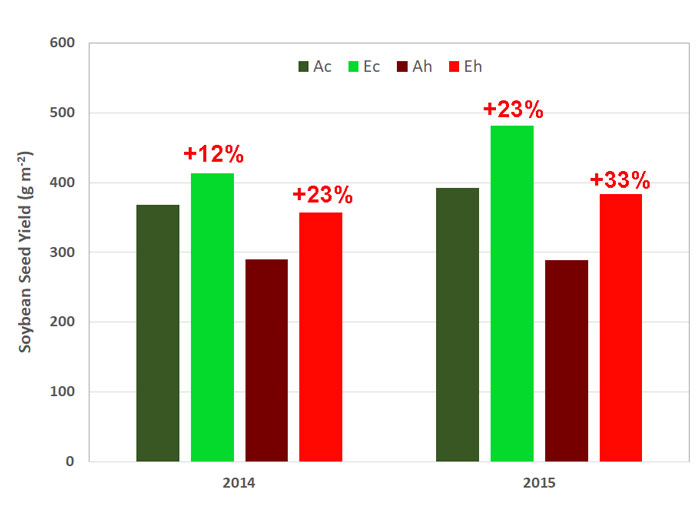 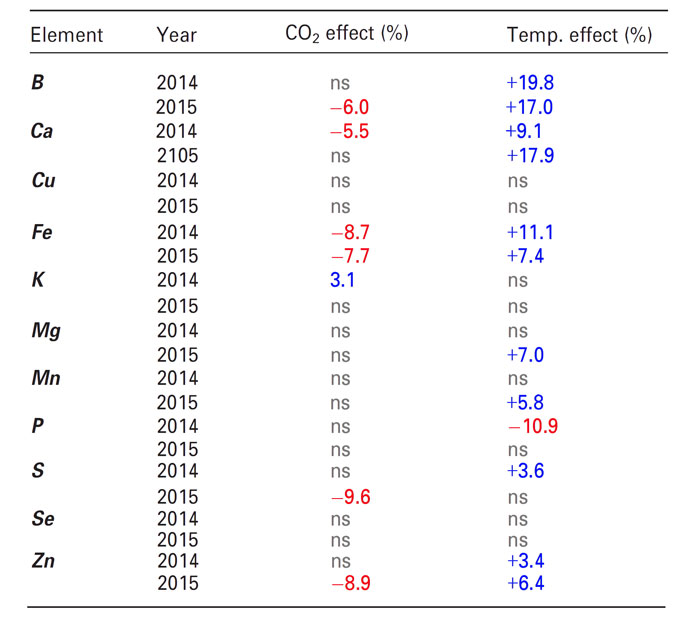 Figure 2. The percent change in various selected mineral elements measured in soybeans grown in 2014 and 2015 due to elevated CO2 (CO2 effect %) and elevated temperature (Temp. effect %). Source: Köhler et al. (2019).
This article appeared on the CO2 Science website at http://www.co2science.org/articles/V22/sep/a8.php
]]>